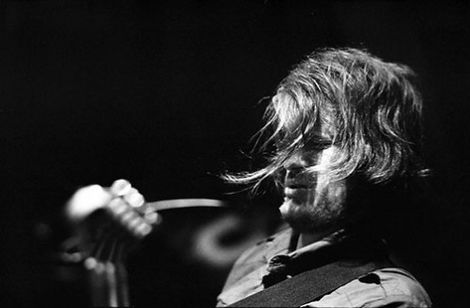 With their vortex of guitar jams and primeval Sabbath sludge, Arbouretum bring their awesome sonics to the Kazimier, Getintothis’ Jamie Bowman blends in with the fellow razor neglecters.

The Kazimier is becoming quite the venue for all that is American hairy and loud and tonight sees Baltimore quartet Arbouretum the latest to plug in and rock out in front of a sadly sparsely populated crowd of fellow razor neglecters.
Like other travellers along the astral planes of American psych such as Espers, Wooden Shijps and Earth, Arbouretum drink long and well from the tap of 60s and 70s rock.

But what really makes this great band stand out is their willingness to flirt with other genres outside the stoner rock canon. When Delivery Comes lowers the tempo to the primeval sludge of Black Sabbath (the song not the band) and frontman and superb guitarist David Heuman gets to show off his considerable skills on The White Bird.
Song of the Nile is even better, displaying a delicious slice of Eastern mysticism reminiscent of Acid Mothers Temple.
Heuman is clearly a heavy dude – he’s spoken about how his song writing is influenced by Jung and there is a weightiness and seriousness about his delivery which belies their flannel shirted image of the kind of guys you don’t want break down in the desert with.
He’s is a soloist of superb, grungy brilliance too: like Neil Young jamming with J Mascis the fret bothering comes in wildly inventive bursts, backed up by some powerful drumming from Buck Carey.
Heuman’s no mean vocalist either, lurching from hushed blissed out whispering to dark, shamanic howling all of which gives their old time toe dipping into weird English folk on The Black Sun, a shivery, spooky element.
One of the finest and most varied of the groups to emerge from the New Weird America scene, Arbouretum are blossoming into something very special indeed.

Share. Twitter Facebook Google+ Pinterest LinkedIn Tumblr Email
Previous ArticleLiverpool-bound Laurel Halo on teaming up with Ridley Scott and the sound of choked naked vocals
Next Article Resurrection Festival Day One: Bird, Get Back Colquitt, The Tapestry, Coffee and Cakes for Funerals: The Kazimier, Liverpool