The newly-refurbished Liverpool Royal Court Theatre reopens its doors next week. Getintothis and a selection of Liverpool’s music fraternity run through their famous – and infamous – memories from one of the world’s most rock and roll theatres.

The art deco Liverpool Royal Court Theatre reopens its doors to the public next week after the completion of the first phase of its planned £10.6m redevelopment.
Nobles Construction, which restored the Neptune (now renamed the Epstein) theatre spent the past 14 weeks renovating the Royal Court auditorium.
An £867,000 Heritage Lottery Fund grant and more than £200,000 raised by theatregoers has been spent on the 1,150-capacity three-tier seating, new lighting installed, including LED lights around the proscenium arch, gold moulded detail on the ceiling and a snazzy black and gold paint job.
Royal Court Liverpool Trust chief executive Gillian Miller said: ‘I feel quite stunned actually – I am really proud of how the theatre looks.’
And so she should. Ahead of it’s reopening we asked several figures in the Liverpool music scene to recount their favourite memories. The response was quite incredible, so we’ve split them up into two parts. Here’s the first, with the second online tomorrow – please feel free to leave your own Royal Court memories too. 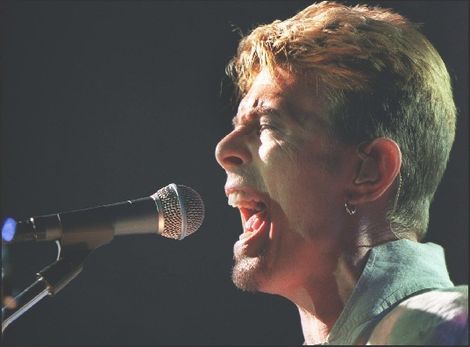 David Bowie live at the Royal Court
Dickie Felton: Communications Manager at National Museums Liverpool.
I was 16 clumsy and shy the first time I visited the Royal Court. The memory is so vivid I even remember what I was wearing – a Smiths Panic t-shirt.
Not that I was there to watch Manchester’s finest; my Royal Court debut was a 1989 gig by The Beautiful South. I may as well have been watching any band that night.
I was transfixed by the deafening noise, the atmosphere and pockets of vomit. Like standing on the Kop for the very first time, it was a teenage discovery where I felt ‘this is where I belong’. The speakers seemed to be about 50 feet tall. You’d come out of a gig with your ears ringing for days. 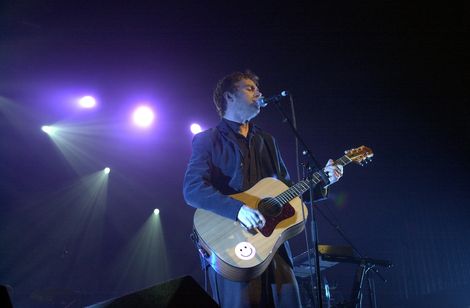 Blur’s Damon Albarn live at the Royal Court
I watched dozens of indie groups there over the years: Stone Roses, Charlatans, Blur, Suede, Ride, Shed 7 – the list endless – Chris Issak, the Coral (supported by The Proclaimers), Echo and the Bunnymen, Ian Brown and of course my hero Morrissey (1999 and 2004).
Some of the greatest nights of my life were stood on the sloping standing section swaying or jumping around with hundreds of others. I’ve been at concert venues around the world from the Royal Albert Hall to New York’s Hammerstein Ballroom – and nothing ever came close to the Royal Court for atmosphere. There was just something so special about the place from the Art Deco splendour to the spilt Stella.
I remember a James gig during the summer of 1990 when they played Sit Down and the entire audience actually sat down. An amazing moment.
The great gigs for me where always the ones you had to queue for. I became as familiar with the Roe Street pavement outside as I did with anything inside.
In 1992 I spent three hours queuing for Cure tickets. I only just managed to get one. Robert Smith‘s men were massive at the time having released their Wish album. The ensuing gig one of the greatest I’ve ever seen. The Cure played for nearly three hours. I had to sprint for the last train home.
In those days queuing outside the Royal Court for important concerts was a vital part of the whole experience. In this internet age no-one queues for anything these days other than the Post Office.
The Royal Court wasn’t always great. You could never get served at the bar. You were told off for dancing in the seats. I remember the standing area getting pretty rough some nights, especially at a Wonder Stuff gig where people were caught in a crush.
I was saddened when they stopped gigs at the Royal Court but the place still retains amazing memories for me. 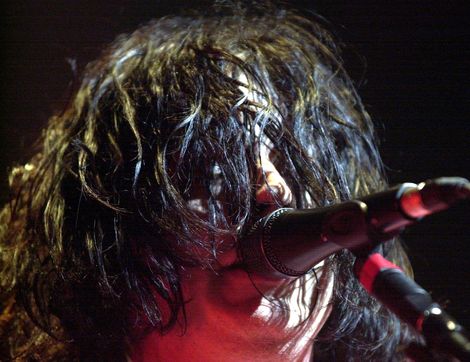 The White Stripes’ Jack White live at the Royal Court
Jamie Bowman: Journalist, Getintothis contributor and ex-Royal Court staffer.
I’ve got so many memories from my two years working there – Ryan Adams throwing himself off stage on my first night as duty manager. He was screaming ‘I don’t want National Health‘ as he was taken away in an ambulance.
I remember Damon Albarn excitedly kicking down the dressing room door and then serenading people in the bar afterwards with is ukulele. Morrissey was amusing, constantly complaining that his dressing room was too cold or too hot and then proceeded to order a bowl of museli. Other favourite memories include Paul Weller signing my copy of All Mod Cons and the great, late John Martyn coming off stage with one leg, wolfing down a curry, drinking a Guinness and lighting a joint before going back on.
The best gigs I went to as a punter include The Charlatans on the day Labour came to power in 1997 – a bigger party you cannot imagine – and The Super Furry Animals when they toured the quadrophonic sound system – such massive noise! 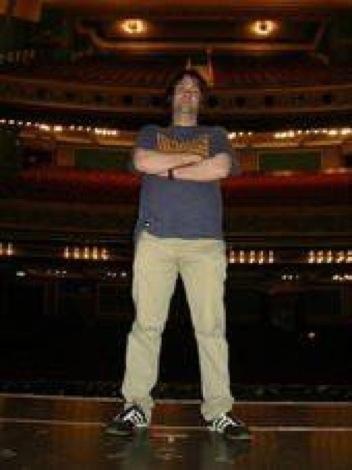 Getintothis’ Jamie Bowman working at the Royal Court
As manager of the Royal Court, The White Stripes were absolutely awesome and one of the loudest gigs I have ever heard. Morrissey was a dream to watch, especially from the side of the stage.
And The Coral with the Proclaimers supporting – it was a massive celebration at Christmas with one of Liverpool’s finest bands. 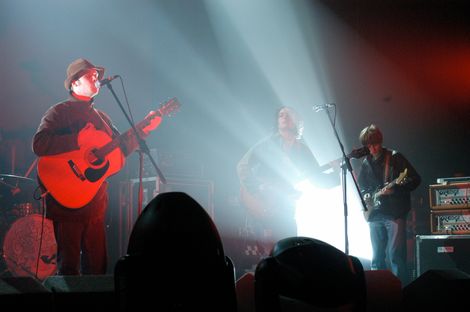 The Coral live at the Royal Court
Jim Connor: Liverpool ECHO journalist.
The Smashing Pumpkins were on their 1994 Siamese Dream tour when they rolled up at The Royal Court for their first ever Liverpool gig. It was one they were unlikely to forget.
With a full house, the atmosphere was crackling and it didn’t take long for the crowd surfers to get going. The Royal Court security were waiting at the front of the stage for them as they came over, telling the surfers to jump down at the front of a crowd into a pit that led under the stage and away to the side.
It was a drop of about seven foot, enough to give people concern as they jumped from the heads of the crowd they had been surfing on.
After about half-an-hour of the gig half a dozen people had already made this leap under the stage, but then one crowd surfer simply refused.
At about six foot four and 15 stone, the people under him were desperate to unload his hefty weight to this stage drop. But he took one look down and decided it was too far for him. He quickly looked round at somewhere else to go. There was only one place and that was on to the stage, where he suddenly found himself stood next to bass player D’arcy Wretzky, shrugging his shoulders and mouthing the words ‘what the fuck do I do now?‘
At this point a member of the security sprinted at full pace from the stage wings and rugby tackled the big invader to the ground. The lad had seen the bouncer just a split second before the collision and had attempted to fire off a quick succession of punches, but unfortunately he missed the security man catching poor D’arcy full in the face instead.
The crowd looked on in awe. Lead singer Billy Corgan seemingly only became aware of the problem when the bass guitar cut out. Looking round he saw a dazed D’arcy clutching her head as the invading fan was being kicked and punched by a number of the security team.
Thinking his band mate had been assaulted, the lead singer slung off his guitar and joined in kicking the assailant.
As the guy was bustled off stage, the band – not unreasonably – stormed off. Down went the lights, and everyone waited to see if they would return. After about ten minutes Corgan returned alone and walked up to the mic.
‘OK, so we just got back to our dressing room and it seems someone has broken in and stolen our bags that had all our passports and stuff in,’ he announced to the crowd. Unfortunately the Royal Court was giving him no sympathy and 3,000 odd people just started laughing.
Above the laughter, Corgan declared: ‘Jesus Christ man, all our lives we dreamed of playing here. And what d’ya do when we get here? You beat us up and you rob us. This place is just like Chicago, man! I kinda like it.‘
He walked off shaking his head, but smiling. After a few minutes the whole band returned to finish their set, seemingly having forgiven the Liverpool crowd. 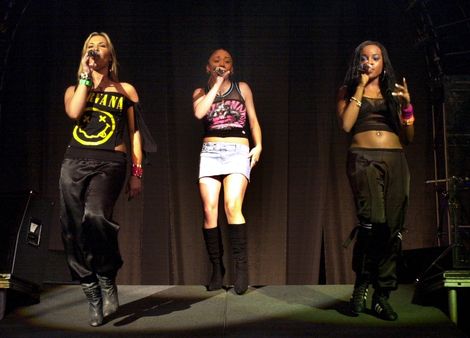 The Sugababes live at the Royal Court
David Prentice: Liverpool ECHO journalist.
His name is Iggy Pop and he’s the Godfather of Punk. He was the first performer to stage dive, he was a bare torso-ed loon who rolled around in broken glass, he exposed himself to the crowd and vomited on stage.
And that’s before the dalliances with heroin and alcohol which led to behaviour even more erratic than appearing in TV insurance adverts with a rubber puppet.
But the wild child of proto-punk was sent running for cover – the night he appeared in Liverpool for the first time at the Royal Court.
I’d waited years and years and years to see one of my musical idols… but it was a short-lived affair when it finally came to pass, because of the Toxteth Riots down the road.
Pop was late coming onto stage – and when he did he instantly advised us in that distinctive drawl that he could only perform eight songs. Eight songs!
Apparently the police wanted to avoid releasing hundreds of bouncing teenagers fuelled on alcohol and adrenalin onto the city’s streets late at night – and there was nothing he could do about it. That’s how I remember it.
Of course it was 31 years ago. But a trawl of the excellent Dirt‘s Iggy Pop tradelist site appears to back up the memory.
The date is listed as July 7, 1981. The riots kicked off on Friday July 3 following the heavy-handed arrest of Leroy Alphonse Cooper. And the initial listing of a setlist lasting 96 minutes – is explained when you realise the site is selling two concerts on the same CD, the other from Tempe in 1979.
The set-list for the curtailed Court gig is offered up as:
1. Intro
2. Search & Destroy
3. Eggs on Plate
4. Bang Bang
5. Funtime
6. Rock’n roll Party
7. Lust for Life
8. Pumpin for Jill
9. The Passenger
10. Louie Louie
Which is nine tracks. So maybe Iggy decided to show us his rebellious side with a value added track after all.
But no Raw Power, no Gimme Danger, no diving around on stage. If anything he even seemed a little bored.
Incidentally, he didn’t wear a jacket. One for ‘Those Naughty Lumps’ fans out there. Still love him though…
Getintothis continues it’s Liverpool Royal Court memories tomorrow in our concluding second part. In the meantime, leave your memories from down the years.