Stealing Sheep lead the festivities as everisland present a glorious day of music, colour and pageantry at the Kazimier’s Garden Gathering. Getintothis’ Thomas Jefferson soaks up the sights and sounds. 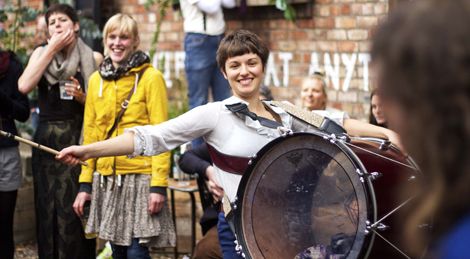 Harlequin Marching Band’s Lucy live at everisland Garden Gathering at the Kazimier
The Kazimier‘s latest adventure is its summer only garden and promoters are already cueing up to throw events in this magical bohemian wonderland constructed in scrubland off Seel Street.
With With Festevol to follow in early August, promoting team everisland‘s Garden Gathering sets the ball rolling with an early evening through til early morning summer soiree of music and performance art.
Early doors, and the garden is packed with the festival vibe and carnival spirit in full flow. There is a lengthy wait at the bar, perhaps an issue that may need addressing at future events, although the ingenious coin drop pulley system can save time if you only want a can of Red Stripe. 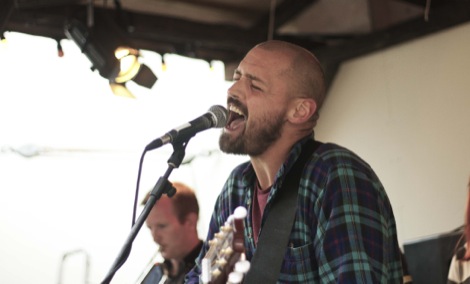 Silent Sleep’s Chris McIntosh live at the Kazimier Garden Gathering
White Bicycles pack the stage with a host of weird, wonderful and downright wacky outfits. Their sound is euphorically upbeat and serves to really get the festivities in full swing after a delicate set from openers Silent Sleep, which while melodic, subtle and imbued with a deep melancholia, it’s not until the swinging finale of On The Steps Of The Bombed Out Church, that Chris McIntosh‘s collective really find their stride. 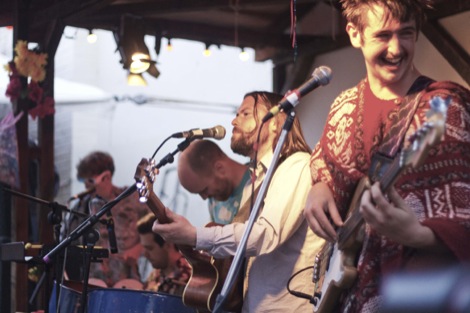 White Bicycles live at the Kazimier Garden Gathering
There’s a west-coast California vibe about White Bicycles that at times has the cheesy cheeriness of The Thrills, yet has far more intrigue, taking influences from all and sundry, with elements of ska and ragtime while maintaining an overall euphoric uplifting essence reminiscent of The Polyphonic Spree.
By way of an interlude, touring shadow puppeteers Mr Wolf Collective, whose show is performed on the most fragile looking screen held together by mainly gaffer tape, reveal a story beautifully told with a gorgeous soundtrack to match. 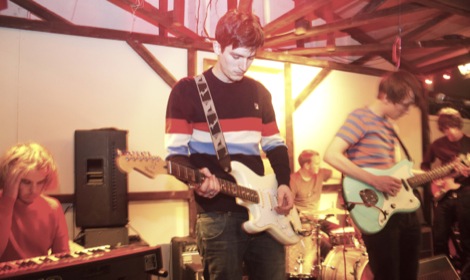 By The Sea live at the Kazimier Garden Gathering
By The Sea sound like a myriad of current bands endorsing reverb-laden guitars laced with psychedelic pop overtones and melodies; think The Horrors minus the goth undertones. Though their sound is less grand, it is nonetheless tailor-made for sunkissed mid-afternoon festival slots.
A slick sound that washes over the senses easily without ever grabbing them, yet there is little in the songs to set them apart from the pack and had we not known, we wouldn’t have guessed they were a Liverpool band.
Their singer’s slightly detuned vocal could be perceived as a weak point, yet it perhaps makes their slick sound a little more human in the way it works for Primal Scream. 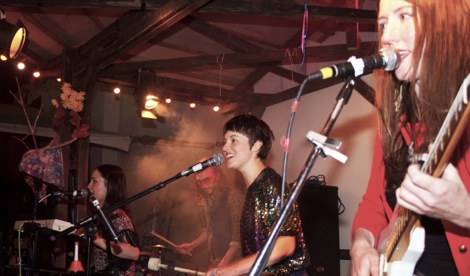 Stealing Sheep live at the Kazimier Garden Gathering
The turn out for Liverpool’s most talked about females, Stealing Sheep, is exceptional; the venue is at capacity 45 minutes before their set with a cue stretching down Seel Street.
But, their set doesn’t captivate an excitable audience from the start, and at times their sound and melodies are sweet yet repetitive.
However, once tracks from their forthcoming debut Into The Diamond Sea are on show the set takes a marked upturn, enhanced with their latest single and stand out track, Shut Eye.
They are joined on stage by members of the Harlequin Dynamite Marching Band and a vast array of members from the audience, who together give a rousing celebratory display culminating in a celebratory atmosphere as the darkness descends in the garden. 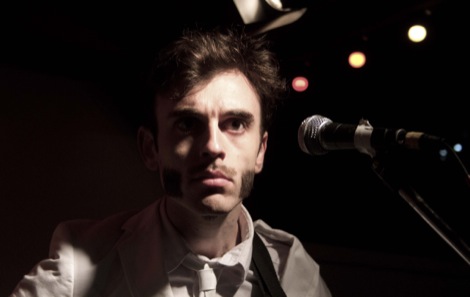 a.P.A.t.T.’s The Master Fader live at everisland’s Garden Gathering at the Kazimier
The effervescent and constantly evolving music machine that is a.P.A.t.T. close the evening with a characteristic yet erratically enigmatic display.
Donning matching white suit jackets, emblazoned with Hogwarts style badges, guitarist The Master Fader, completes the bizarro imagery with square sideburns that have to be seen the be believed.
From a collective drumstick clacking, their opener soon heralds keyboard staccato before erupting into anarchic thrash electro noise.
It’s clear they’re in playful mood, led by Gen Er Al Midi‘s wild-eyed smile, he addresses the crowd simply with ‘hi gang!‘
It’s clear from the bemused look on many of the onlooker’s faces’ that this is their first taste of a.P.A.t.T., and the sceptics are soon converted by the bewildering talent that amazes and astounds in equal measure. 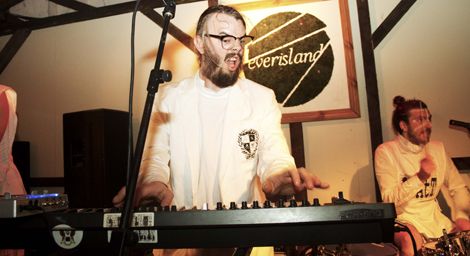 a.P.A.t.T. live at everisland’s Garden Gathering at the Kazimier
Purple Aki is a thrillingly terrifying Balkan style knees up while Apprentice Attention provides the perfect end of night antidote.
The overall success, though, must be handed to organisers everisland and the Kazimier garden itself – we struggled to see how they could accommodate three hundred and more people, but despite queues at the bar, the event had a genuine festival feel unlike any inner city gig – the Kazimier has done it again – roll on Festevol.
Pictures by Andrew AB.
Stealing Sheep’s Into The Diamond Sun – first listen.
Stealing Sheep’s Shut Eye Kazimier Garden session.
Stealing Sheep’s GIT Award 2012 artist nominee profile and interview.