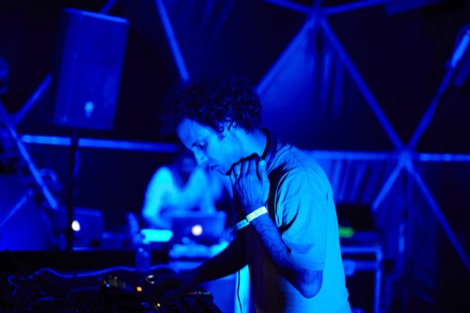 It seemed like half of Liverpool descended on a sunny island off southern Croatia and headed for the beach bonanza that is Hideout at the start of the month.
Getintothis’ Ben Rossington and Janine Yaqoob packed themselves off to the tiny island of Pag to join them.

Advertised as three days of all-night partying, Hideout is actually more like six days and nights of a full-on dance music feast.
The main event is spread over three nights and three clubs but throw in boat parties, pool parties, a beach with a party atmosphere and you’ll be looking for a holiday after your holiday just to recover.
Hideout, conceived by the brains behind Manchester’s Warehouse Project and Leeds’ Electronic Music Group, has a distinctively British feel. The crowd are mainly Brits and the music is what gets Brit dance crowds going.
Electro, techno, tech house, dubstep, drum and bass, a bit of jungle, a smattering of hip-hop… You want it? You’re gonna hear it at Hideout.
Getintothis landed on Pag on the Tuesday and there was already plenty going on. Pre-parties started at 2 in the afternoon and went on til 6 the next morning – the perfect preparation for what was to come.
Heidi and Michael Mayer played massive crowd-pleasing sets to bring the last pre-party to a close and give Hideouters (as I’m now christening them) their first taste of the magnificent sunrise over Zrce Beach.
You like your Ibiza sunsets sat outside Mambo or Cafe Del Mar? You’ll love your Croatian sunrises.
The first ‘proper’ night saw a heavy start to proceedings. In the massive open air white-washed Papaya, which hosted most of the main name acts, was a distinctive dubstep bass with Benga and Youngman leading into a heavy Sub-Focus who were given an extended set after Chase & Status missed their headline slot.

Over in Aquarius 1, Four Tet and Caribou played a back-to-back set which had the crowd up before handing over to Ben UFO and Jackmaster but it was in Aquaruis 2 – the darker, sweatier inside venue – where Aeroplane and Erol Alkan really rocked it.

The festival’s third venue, Kalypso comes into its own when the sun starts to rise though those who headed over for Kerri Chandler‘s deep house 2am set were disappointed to find Maceo Plex had missed his flight so Kerri was on earlier but with Soul Clap still going at half 8 in the morning, there was really nothing to complain at.
Saturday saw Getintothis take to the seas for a bit of water-based raving. Liverpool’s own Chibuku hosted their boat party with Jack Beats and the Chibuku lads on the decks (‘it was massive,‘ according to one drunken sailor we bumped into later) but we set sail with Annie Mac Presents in the sweltering 36 degree heat.
A three-hour, three man/woman back-to-back with Annie, her fella Toddla T and Doorly was a bit hit-and-miss with three distinct styles sometimes clashing but you’re on a boat in the sun bobbing up and down on the Adriatic Sea – you know, there’s bigger things in life to worry about…
That night most of the boat party DJs took to the main clubs while Bristol’s Eats Everything and San Francisco’s Claude von Stroke really upped the ante in Aquarius with blinding sets.
Loco Dice on the main Papaya stage was, however, less than had been hoped for – a bit of a trend with the bigger names.
Sunday’s final night actually started mid-afternoon while the sun was still high in the sky with the massively anticipated Mulletover pool party.
Russian techno/house queen, and young boy’s wet dream, Nina Kraviz swapped sets with the late-arriving Seth Troxler who went back to back with Geddes to keep the Papaya pool party crowd up and raving while Artwork over at Aquarius shredded up the garage classics to a grateful gathering.
By the time the moon was doing its thing, Damian Lazurus and Troxler were doing theirs on the Papaya main stage (which Getintothis managed to gatecrash for a couple of minutes before getting unceremoniously booted off) and Skrillex, the DJ equivilant of Marmite, dropped tune after tune before Chase & Status finally made an appearance in Aquarius 1.
But sets of the final night, and probably the festival, were saved til last. While Ricardo Villalobos enthralled and frustrated in equal measures on the main stage, it was in Aquarius 2 that Hideout came to a proper close.
Simian Mobile Disco saw out the last rays of moonlight before Ben Klock played a techno set of almost perfection as the sun rose up.
By the time the last beats dropped out of the speakers at gone 7am, there was just the small matter of the final after-parties left. At that point Getintothis is ashamed to admit we chose bed instead…