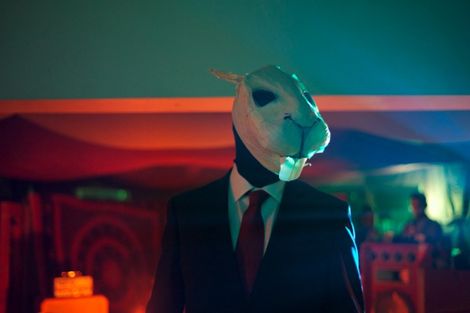 Raucous rock and roll, retro psychedelia and a giant rabbit with a filthy mouth – Getintothis’ Alice Robinson laps up Milk’s feast for the senses.

In the shadowy entrance to MILK:Presents, Getintothis waits, clutching bottles and boxes, to be buzzed in.
The door swings open and inside we surge up an endless set of narrow wooden stairs, through the winding intestines of the building, towards the music throbbing from above.
At the top of the steps we are greeted by Zackor (MILK‘s resident rabbit-headed behemoth), grotesque and silent, looming over us with a giant hand outstretched. We shake it – reluctantly – make our contribution, and go in. We are through the looking glass.
We are also in the epicentre of Liverpool’s underground music scene. In the main room, huge windows reveal a panorama over the city centre. Old lockers, dotted with candles, lie on their side to serve as tables.
The air hangs thick with smoke, and a seventies porn flick is being projected on one wall – so you might all of a sudden find your head in someone’s crotch.
The live music starts with a bewitching acoustic set from singer/songwriter Marvin Powell, whose enigmatic vocals soar and whisper over a backdrop of stylish folk guitar.
Between the songs that slide from major to minor; the odd lyric dripping with vitriol and the wicked smile from behind a microphone – this is not the usual jangly Dylan wannabe you’re used to. This is folk with something behind the eyes.
When the first act is over, the room still glowing with that musical equivalent of post-coital euphoria, we are invited by Zackor (the bunny from your nightmares), to “LEAVE A SMUTTY SENTENCE” in MILK’s book. 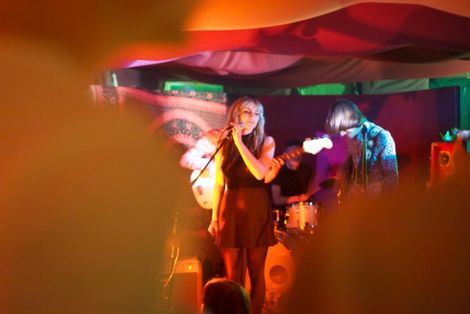 Grace Lightman of The Hypnotic Eye live at Milk
This giant stalks the room silently collecting his obscenity, and then on to the stage, with a sign in his hands to introduce the next performers: The Hypnotic Eye.
This five-piece from Wimbledon have been attracting attention with their particular brand of ‘flower punk’, and they demonstrate why at MILK, tearing through a kaleidoscopic set.
Guitarist Lindsay Murray‘s guitar squalls like a siren in a duet with singer Grace Lightman, whose vocals and stage presence allow her to hold the audience’s rapt attention, even when the audio carnival that is a Hypnotic Eye gig leaves you feeling like you’ve inhaled too much ether.

Next on stage is The Wicked Whispers, a ’60s-inspired band that deliver the type of epic song, packed with sweeping choruses and rich vocal harmonies that it’s hard to fault.
It’s good, solid psychedelic pop – the kind of thing you might listen to if you were on a road trip with The Small Faces.
The crowd thoroughly whipped, hordes of dancing, sweat-slicked people fill the hotbox that now is the main room. 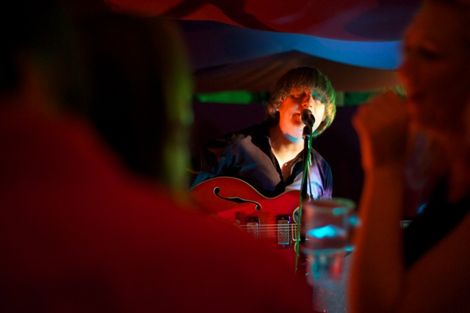 Michael Murphy of Wicked Whispers live at Milk
For those feeling the heat, the secondary space has a mellower vibe – there are plenty of comfy seats, a stereo in one corner and the pungent aroma of something distinctively merry in the air. The third room, the smallest, is infested with the spidery metal furniture of television recording.
Nestled on an oversized sofa, in the secret corners of a secret gathering, people are confessing their deepest desires to MILK:TV.
But first, back to the party as the last act take the stage. Raw City live up to their name, hammering out raucous rock tunes about the wasted youth that get the room pogoing like it’s 1979.
The band has attracted a small army of loyal fans that descend upon the stage, climbing on furniture and generally rocking up the place. The feeling can’t be denied – this looks like a band that is going somewhere.
And that’s the enduring magic that overflows at a night in MILK – the magic of possibility.
The cruelly enthralling inkling that these people, in this place, may actually be witnessing the dawn of something truly great.
What else could persuade perfect strangers to share clandestine kisses in the TV room? Surely, only something magical can turn a wallflower into an exhibitionist, who will perform a dare for the camera, or lose the secrets of her virginity to a rabbit’s notebook.
You can’t help but feel that something special is happening here. And it’s straight from the mouths of babes. Come and bear your soul. You won’t regret it.
MILK is taking the show to The Tamesis Dock, London on August 17, which will be streamed live through our friends and partners Intervenue. MILK:TV is coming soon.