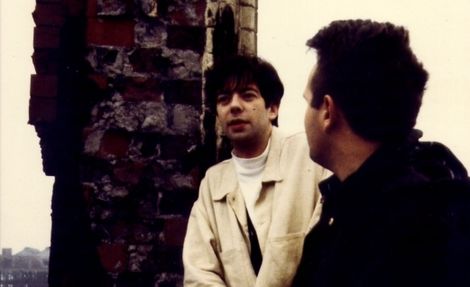 In amongst all the nonsense, Youtube does offer up a few gems.
And thanks to The Tea Street Band‘s Nic Otaegui for pointing this one out – a French documentary called You’ll Never Walk Alone documenting Liverpool’s music scene circa 1992.
In an era which seems so fresh in the memory, yet pre-dates the age of the internet, this documentary serves to highlight the access and blissfully detached musings of some of Liverpool’s music greats. It also offers a stark reality check into post-Thatcher era Liverpool and it’s desolate, crumbling landscapes – starkly contrasted by a mood of optimism, hope and longing.
The film-makers followed the likes of Echo and the Bunnymen‘s Ian McCulloch, Pale Fountains‘ and Shack Michael Head, Edgar Jones (The Stairs), Pete Wylie, Jayne Casey and several other Liverpool figures.
Here’s the documentary, spliced up into six parts.