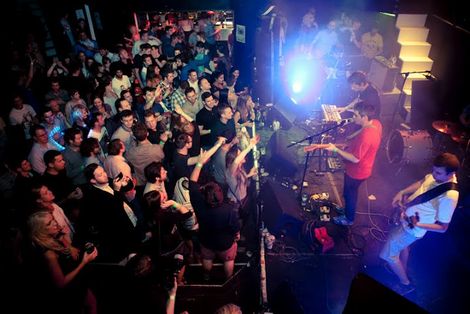 FestEVOL 2012 showcased much that is good about the melting pot within Liverpool’s music scene, yet Getintothis’ Amy Jones suggests there’s room for improvement.

Last weekend, despite ominous grey skies over the city, the weather was kind enough to hold out, much to the delight of the cities music lovers, for the second installment of Evol‘s FestEVOL.
The Kazimier provided an ever beautiful backdrop to the night and the venue’s new garden which, has already been home to many a memorable night, (Krunk Fiesta and Olympics and EverIsland Garden Party being particular highlights), was the perfect location to create a festival environment.
Mello Mello and Kazimer chefs added a hefty does of atmosphere to the event with the smell of barbecue temptingly dispersing itself amongst the crowd.
Having only moved back to the city in the last year this was my first festival experience at the Kazimier and my expectations, rightly or wrongly, were set high, as I anticipated a night showcasing the best music the city had on offer.
Events like FestEVOL offer a rare opportunity for gig goers to see a large group of artists traversing styles and career trajectory’s come together in one venue brought together only by geography.
Therefore, it seemed to us that EVOL had the perfect opportunity to ‘curate’ the city’s music scene, show one particular view of it and present that as a whole over the two Saturdays. So other than ice cold Rekorderlig and sausages what did FestEVOL have on offer?

Filter Distortion mixed electronica and guitar ambience to great effect at FestEVOL
Well, thematically, there were a lot of variations on rock from classic, to math, psychedelic and back again. Bands like Muto Leo with their Foals-like guitar riffs showed a lot of promise for such a young band and their upbeat summery guitar was perfect in the setting of the garden.
New faces Kusanagi had a much more classic rock vibe and provided a welcome change of pace with instrumental songs revealing a love of forceful melodies and heavy riffs.
PINS provided us with some beautiful psychedelic soundscapes, as well as contributing a small female presence (along with the ethereal Bird) in an overtly male dominated line up.
The undeniable highlight of the night came from Outfit, who played a brilliant and ever cool set of synth centric art-rock. Listening to the crowd sing along with the ‘ah-woooo‘ section of Everything All The Time felt like the perfect welcome back to the band who have just moved back to Liverpool from the Big Smoke to record their album. 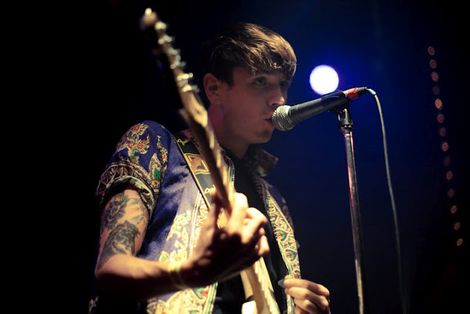 Death At Sea are a fine example of the rising talent in Liverpool showcased at FestEVOL
While there was clearly a conscious effort being made to celebrate music in Liverpool across genres, with bands like Sun Drums (who did a DJ set on the night) Dass Unser and Statement Haircut providing the build up for Outfit, it’s clear electronic music has a hold over us here in Liverpool.
We all love a good synth, but I don’t think anyones complaining about that. After Outfit, we caught the end of Thunderbird Gerard on the garden stage, adding a much needed hip hop hit to the night with his eclectic mix of disco, classic hip hop and soul.
However, as an American living in Berlin we’re not so sure his presence made up for the lack of any representation of Liverpool’s hip hop acts. With artists like Miss Stylie, Esco Williams, Kasst and a whole array of hip-hop talent knocking about at the moment, it seemed a shame there was not more representation of home grown urban talent at FestEVOL. There was also a distinct lack of music reflecting the heavier end of the musical spectrum.
Other than sidestepping the occasional genre, the night also lacked a sense of momentum. 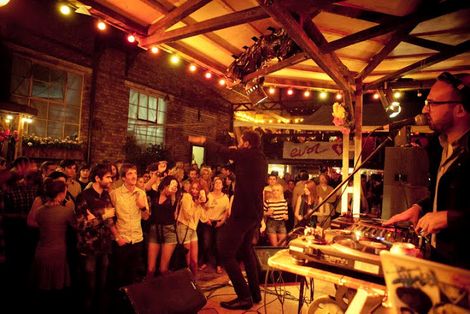 Berlin-based Thunderbird Gerard was the sole artist showcasing urban music at FestEVOL
After a while, perhaps due to the 4pm start, the two stage set up started to make us feel a bit like the ball in a tennis match. The lack of info about the line up didn’t help, and it meant the build up of expectation about the acts was missing.
It was more a happy surprise when you found out a band you wanted to see were playing than anything else. The disjointed feel to the night was continued by the difference in the quality of the bands.
While one of the finest aspects of FestEVOL was the inclusion of newcomers on the line up, the quality of less established bands mixed in with the more familiar acts meant that it sometimes felt that one band would put you on a high only to soon after be brought down by a band who hadn’t quite found their feet yet.
This is a danger at any festival but the intimate size of the venue intensified things here.
Overall, we were very difficult customers with high expectations to see a very varied scene translated into something coherent and easy to digest over two weekends.
The line up of FestEVOL over the past two weekends has arguably shown some of Liverpool and North West’s heavyweight breaking musicians and it certainly provided us with an exciting teaser of some of the great music being made in and around the city at the moment.
While it wasn’t by any means a complete representation of the kinds of music being made in the city at the moment, I think, in the end, that was a great showcase event.
The fact that FestEVOL had gaps where aspects of the music scene in Liverpool were missing, and hiccups with the quality of some of the bands in the lineup, was unavoidable when trying to represent such a diverse and thriving scene.
After all, if it could all be showcased in one festival over two weekends, polished and perfect we would certainly have less to get upset about, but it would be a music scene we’d be a whole lot less excited about in the first place.
Getintothis reviews FestEVOL Part One by Tom Jefferson and Jon Davies.
Getintothis reviews FestEVOL Part Two.
Getintothis FestEVOL picture gallery by Marie Hazelwood part one.
Getintothis FestEVOL picture gallery by Marie Hazelwood part two.