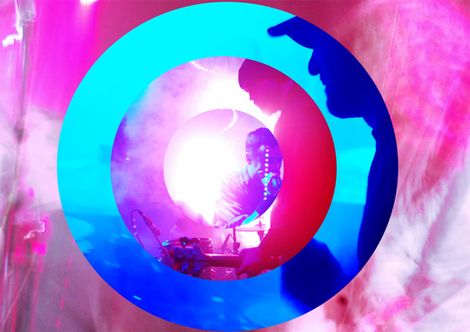 Mugstar return with psychrock beast ahead of fifth album Axis.

Liverpool cosmic psychonauts Mugstar are back with their fifth studio record, Axis on October 29.
Released via Agitated Records, the quartet return with a characteristic slab of whacked out spacerock.
The lads, who were nominated in the first GIT Award, say this new expansive collection expansive will ‘travel through different movements, diverse colours and sounds and picking up from where (their last record) Lime left us in August 2011.’
New tracks include the elevating Tangerina, the cylindrical Axis Modulator and the sonic mantra Upturnsidedown.
We’re particularly digging Neil Murphy‘s spidery echo-driven guitar which dances out of the mix while the closing frenetic beats and bass collison between Jason Stoll and Steve Ashton.
Mugstar play two UK shows including Liverpool’s International Festival of Psychedelia on September 29 alongside Hookworms, Time & Space Machine, Wolf People and a whole host of others at the Camp and Furnace.