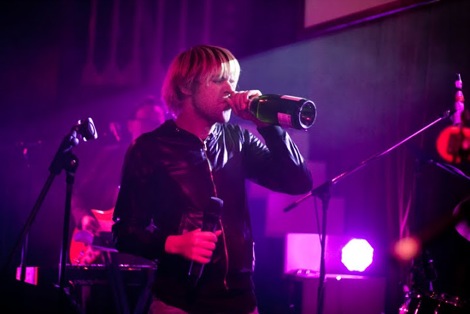 Ariel Pink is one of contemporary music’s most fascinating characters.
Erotic enigma, basement poet, cross-dressing producer, psycho-sexual lyrical deviant, multi-instrumental chancer – he’s one of America’s most curious artists, who managed to back up his fantastical backstory of churning out hundreds of self-released tapes in his garage with a major label debut of serious calibre.
The last time we saw him he was having a severe meltdown at All Tomorrow’s Parties‘ in Minehead when heavy-handed security shut down his impromptu gig outside a Burger King joint at 3am insisting they’d broke his microphone. It was quite a scene.
Tonight he’s making another one. But as expected – it’s unexpected – and not quite what people had in mind.
With the blonde bobbed elf refusing to do press for his three-date UK tour, at the Kazimier he’s proving equally elusive. 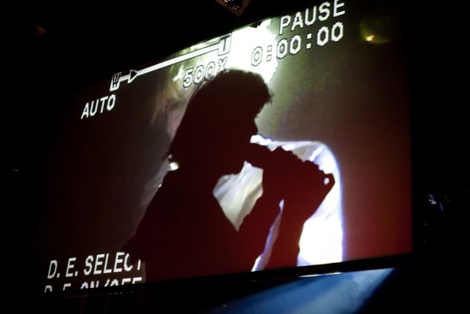 Ariel Pink hides his love away at the Kazimier
Pink’s preferring to remain unseen – performing high in the Kazimier‘s rafters using the club’s top shelf (how apt) as a platform projecting his face, crotch, fairy lights and whatever else springs to mind on to a large screen below.
At first we’re intrigued. We’re drawn into Pink’s virtual vision and wryly amused at this installation-meets-performance-art set up. But 20 minutes later, and the detachment of emotion results in a bizarre contrivance which feels like you’re watching a gig on Skype.
Down below the wheels keep on turning as the Haunted Graffiti duo of Tim Koh and Kenny Gilmore stick largely to the script but Pink’s absence makes for a baffling watch. 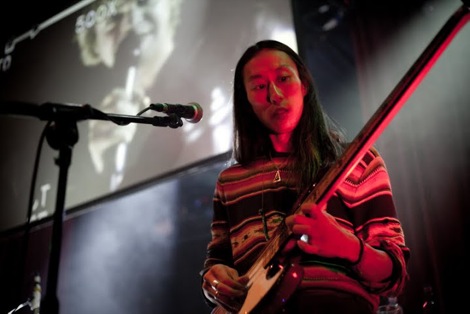 Ariel Pink’s Haunted Graffiti’s Tim Koh thrums on.
The baffling nature of the gig was typified in the sub-Vegas support provided by Geneva Jacuzzi who, dressed as a toy soldier, encases herself on the balcony in what appears golden bubble wrap before miming her way through 40 minutes of ghastly electro pop. Think Ke$ha in Blackpool. And yet, for all it’s ridiculousness it’s near-compulsive viewing. 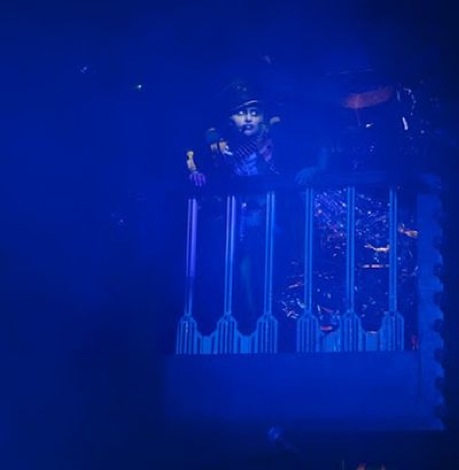 Geneva Jacuzzi plays peak-a-boo at the Kazimier
Sadly in Ariel’s case, he has the music to back up the stage antics, but much of tonight’s set isn’t lifted from that scintillating brew of psychedelic mania Before Today, but from the watered down patchiness of 2012’s follow up record Mature Themes and you’ve a recipe for frustration.
There are moments of magic – like on record, Only In My Dreams is a tight soft-focus jangle with the wind in it’s hair while Mature Themes is a dreamy muted explosion of electronic purring as Ariel coyly intones breathlessly ‘I want it to be good, my baby.‘
But elsewhere it’s a hollow mess minus a heartbeat. Kinski Assassin is a daft child’s toy drone – all whirling keys drones and scat-attack lyrics about sunken battleships, blow jobs of death and testicles, in an affected vocal which sounds like a fat burp.
Is This The Best Spot? recalls Quintron‘s hyperspeed organ skits, drenched in guitar fuzz and cartoon-like bleeps – it’s irritating at best while Symphony Of A Nymph is more Mighty Boosh than mighty boss. 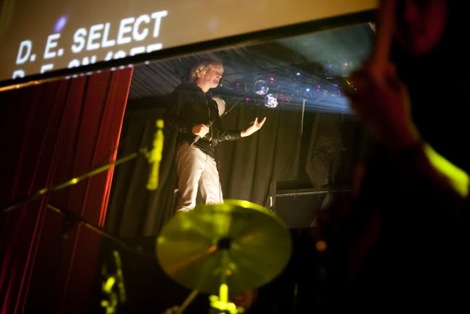 Ariel Pink on the Kazimier’s top shelf
When he does take the stage Ariel’s uneasy, swigging from a bottle of champagne; all twitchy and manic – but it’s this fever of restless energy and tangible presence that the gig was sorely missing for its majority. Sadly we scuttle off for the last train as he retreats to the balcony behind his giant screen – a missed opportunity from one of music’s genuine mavericks.
Getintothis on Ariel Pink’s Haunted Graffiti debut album Before Today.
Pictures by Getintothis’ Marie Hazelwood.