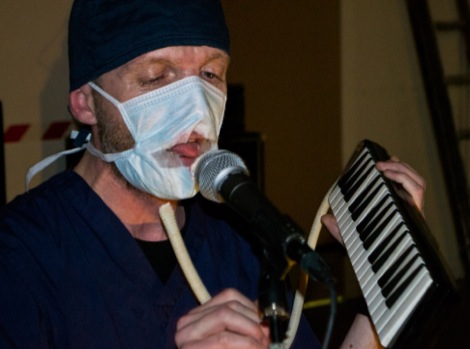 A recent music critic who criticised Clinic for being “a bit repetitive” was surely missing the point of this most brilliant of groups.
Clinic are a short, sharp, shock of a band: dominated by disorientating parps of off key vintage keyboards, swirling distorted guitar and a wholesale dedication to Mark E Smith‘s ‘three rs’ (repetition, repetition, repetition).
Mix this with their infamous image which tonight combines hospital scrubs, surgical masks and a tie-died t-shirt and Clinic make for an unnerving spectacle.
Thankfully tonight, there is plenty to distract from the scary goings-on on stage with many of the sparse but enthusiastic 200 strong crowd’s eyes drawn stage right.
The reason for this is a brilliantly observed and downright cutting put down of Liverpool City Council’s Planning Enforcement Division’s continued and frankly ridiculous persecution of this brilliant and worthy venue.
Static have been struggling to host gigs recently due to these pen pushers’ insistence that the gallery has “no planning consent to run as a gallery, studios and social space as it is still a light industrial factory.”
So in true Andy Warhol style, tonight’s gig space has been turned into a literal production line.
As Clinic perform new album Free Reign, a collective of lab coated odd balls fiddle around with dictaphones, cassette recorders and the kind of ghetto blasters last seen being held by a punk on an 80s London postcard.
Bright yellow cassettes are then removed, packaged, labelled and made available to the waiting audience immediately after the show’s conclusion.
It’s impossible not to get caught up in this brilliantly subversive conceit: at £3 a pop nearly all the audience leave clutching a unique memento which hopefully captures not only the sound of the brilliant new songs.
Witness the hilariously-titled Seemless Boogie Woogie, BBC2 10pm (rpt) and the Sun Ra free jazz of Cosmic Radiation) but also a thrilling number of Clinic classics, including TK, The Second Line and the wonderful IPC Sub Editors Dictate Our Youth.
Tonight was a brilliant reminder of Clinic’s status as one of the finest bands, not only Liverpool, but the UK, have produced in the last 15 years. If, on the other hand, Liverpool Council want to cease production, than more fool them. 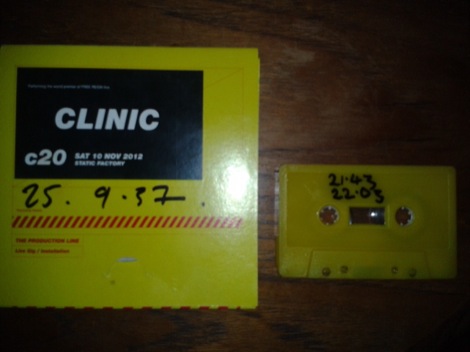