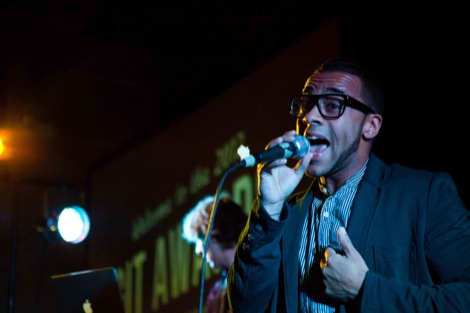 Esco Williams throws down New Challenger before Getintothis has a chinwag about his bid for world domination.

Esco Williams has performed an exclusive rendition of his debut single The New Challenger ahead of the MOBO Awards 2012 this weekend.
The Toxteth soul-hip-hop sensation dropped into the Liverpool ECHO’s studio to perform his debut single, which is released on November 12, and new tune I Want You More.
Esco then chatted to Getintothis about his progression from rising star to being shortlisted for the first GIT Award before winning the MOBO UnSung Award and performing at the MOBOs nominations party at a star-studded London show earlier this year.
The former Sense of Sound choir singer is set for a busy for weeks as he is rumoured to be playing his part at the MOBO Awards at the ECHO Arena on Saturday before he launches his single at the GIT Award 2013 launch party at The Grey Space on Friday November 16.
Here is Esco Williams performing his debut single The New Challenger for the Liverpool ECHO.