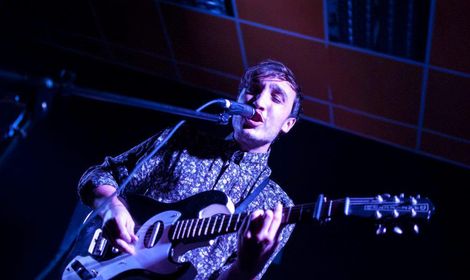 Italian frazzled rock and roll combines with soaring Scouse hysteria as the Lomax welcomes a pair of new bands to champion, Getintothis’ Joseph Sheerin gets his spook on.

Cumberland Street’s The Lomax is a historic Liverpool venue.
Maybe not on the scale of The Cavern, no, but considering Oasis, Radiohead, Doves and The Verve have all played their first shows in this fine city here, it stands tall.
As you climb the stairs, away from the drizzle of a Scouse October evening and up to the celebrated attic room you do feel the weight of history around the place. It’s a classic British venue, small yet perfectly formed with the bare essentials present to put on a night of top quality rock & roll.
Playing their first gig in Liverpool this evening are Florence’s Go!Zilla. In fact, it is the first time they’ve ventured abroad and the reiteration of their pride to be doing that in this city is a welcomed charm offensive from effusive vocalist and guitarist Luca Landi.
They focus themselves on blowing your ears off with 60’s tinged dirty garage rock, and on this evening they rapturously succeed. Lead track off their self-titled EP I’m Bleeding is thumping, stomping, victorious standout that manages to jump from a Hooky-driven Joy Division opening to an all-out Stooges‘ punk offensive.
Landi’s vocals echo underneath a rapturous cacophony of glorious noise that is eerily perfect for this Hallowe’en eve.
On No Man’s Land he demands you to ‘hear me now!‘ and it’s hard not to with a deafening cauldron of noise being cultivated. There’s a confidence about this duo that is hard not to appreciate, particularly when you think of the milestone they’ve struck with tonight’s performance.
Ending with their own theme tune in Go!zilla Surf (in fact, the first song they wrote together), they show the innate talent they hold in the form of a punky, spunky 90 second stunner that, should they garner the acclaim they probably will, will become the theme tune to many a night out.

Preceding tonight’s headliners are Liverpool four-piece, Early Music who they say ‘concoct a listening experience honed in those hours before the dawn’.
It’s hard not to agree when the degree of musicality on stage is so high and is capable of transcending the streets of Liverpool, instead taking on the sensation and emotion of Laurel Canyon.
Telefunken possesses a motoring intro that builds continuously into a storming 6 minute epic that hurtles you into a rhythmic reverie.
Lead singer and guitarist Paul Baker‘s visceral vocals are somewhat reminiscent of The Walkmen‘s Hamilton Leithauser; they tug on the heartstrings as every word is delivered with the sincerity and profundity befitting of the music. The emotion pounds off stage and into the audience consciousness.
Multiplex is the other clear stand-out from the set. The aforementioned Laurel Canyon ambience is most present here as it builds in with an intro not to dissimilar to Neil Young‘s Down by the River.
The soothing and understated drums ease and settle you into a song that could accompany a rather pleasant trip along Mulholland Drive in the black of the night.
But that doesn’t last forever as it builds up into a psychedelic jam, once again littered with Baker’s unrestrained vocals, but complimented with Sam Gill‘s potent, screeching solo that leaves you shaken and perhaps, a little stirred.
The perfect soundtrack to a dark and gloomy night on the eve of Hallowe’en.