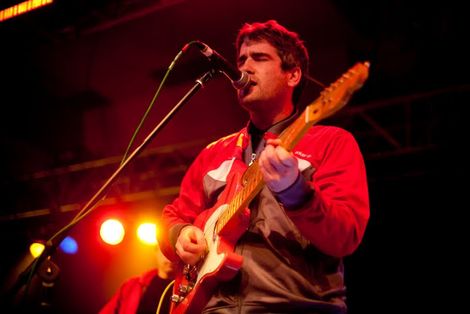 North By North West at the Olympia showcases a collection of bright emerging Mersey musicians, Getintothis Joel Richards is among the few who turned up.

The first North By North West showcase at the Olympia ball room was a triumph for showcasing the emerging bright shoots of the grass roots on Merseyside music.
However, it was close to disastrous in terms of attendance with few souls bothering early doors, leaving it late for anything approaching an atmosphere. It was a shame, for despite the technical hitches and dodgy sound dogging early displays, this was a real insight into the flourishing Mersey scene.
The show began strongly with Midnight Playground‘s set a particular highlight. The four-piece, who list Twin Atlantic as one of their influences, caught the eye, with Virginia is for Lovers a notable stand out.
Another early stand out was Luke Fenlon, who looked completely at home on stage by himself. The 21-year-old sang of how he was ‘tired of being skint‘ and despite the small audience oozed charisma.
It’s easy to see why Fenlon has earned numerous plaudits on Merseyside and comparisons to a young Bob Dylan are hard to disagree with.
Dead Dukes also impress with Hey Darling and Petal Falls From A Rose before closing with a reggae-influenced number which entertained the growing audience. Broken Men followed with a superlative display which was distinctly different from what had gone before and set the tone for the rest of the evening.
Championed by the likes of the Anfield Wrap and BOSS Mag, Cold Shoulder have gained a small yet loyal following in Liverpool.
Having caught them last year at the first ever BOSS Mag show, we were keen to see how they would sound and they didn’t disappoint. Heavily influenced by Oasis, the vocals the dual vocalists worked well most notably Down With The Feeling.
Five-piece The Hummingbirds have also been kicking up a fuss on Merseyside, and their 60s sound doesn’t disappoint with their killer harmonies coalescing so well on Back in Liverpool.
Headliners the GIT Award-nominated, Tea Street Band, quite literally pushing the feeling on with their final show of 2012; a year which has seen them break through into Liverpool music’s consciousness.
Fist-pumping numbers such as Fiesta and new single Disco Lights are triumphs, however, the weak attendance can’t help but put a downer on proceedings as more people should have been present to witness such an occasion.