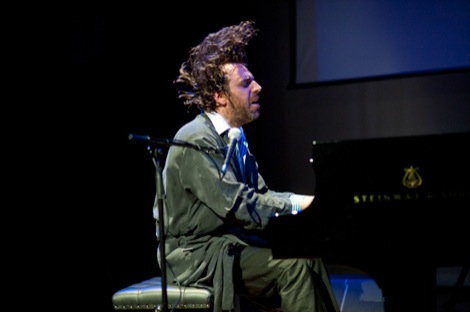 When Chilly Gonzales greeted the Capstone Theatre wearing a sickly sweet smile, emerald green slippers and a silk bathrobe branded with his stage name initials, one of two things seemed likely: he was either going to flash the crowd and get arrested or invite us all back to the Playboy mansion.
Instead, he sat down and caressed the piano in front of him for twenty minutes in serene silence, pausing only to drink in the warm applause, his hands reflecting in the Steinway and Sons logo in front of him as they danced across the keys.
The range was staggering. There was Erik Satie inspired minimalism, electro-infused rhythm, wandering Abdullah Ibrahim melody, demented, end-of-the-world blues and more; often all within the same song, sometimes each hand thinking independently to marry two distinct sounds into a new unique whole.
He then paused and spun round a microphone to make clear his creative intentions: “Addictive music has space you can fill in.” This is exactly the effect he seems to have; captivating compositions that don’t just engage but interact with the audience.
And the participation didn’t end there. Two volunteers – lapsed piano players both, chosen for their assumed enthusiasm and with the intent of getting them back behind the ivories – joined him on the stool.
One helped create an impressive improvisation, riffing on Gonzales‘ three-note wonder Never Stop which helped advertise the iPad on millions of TV screens round the world. The second provided backing for his bongos and bars.
Because, naturally, Chilly Gonzales raps as well. Glossing conscious themes with a healthy coat of comic bravado, he entertained and informed as he sent up gangsta materialism while playfully hyping his own genuine skills and lyrics.
An unhesisitant standing ovation was the least he deserved for a truly eclectic set which showed him to be master of all musical trades, jack of none.
He returned for a 10-minute exploration of every inch of the instrument in front of him – including smacking both ends of the keyboard with the sides of his palms to bash out some big hip-hop beats – before bowing out in beautiful, understated fashion with his “favourite song to come out of Liverpool.”
Ob-La-Di, Ob-La-Da? Thankfully not; a melodic, melancholic take on Frankie Goes to Hollywood‘s Power of Love which proved a touching end to a remarkable evening.