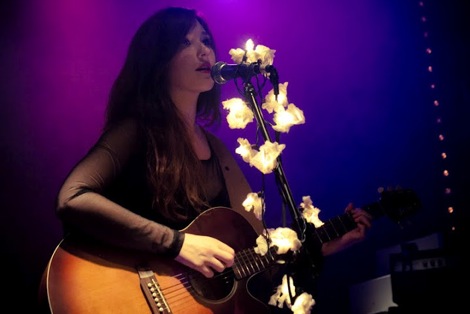 Bird premier new EP Ophelia on their debut maiden UK tour, Getintothis’ Richard Lewis insists these early shoots of promise will lead to so much more.

A bustling Leaf Tea Shop sees The Family Monroe play the supper slot prior to headliners Bird, the duo evoking Mazzy Star minus Hope Sandoval‘s countrified twang and with the addition of a male voice.
Dealing in epically slow, hushed tales of heartbreak, the keynote moment of the set arrives via a radically re-arranged version of Joe Meek standard Johnny Remember Me, retooled from early sixties pop oddity into something approaching a torch song.

Announcing their arrival with a billowing FX pedal laden prelude Bird glide into Intro (Horses in the Waves) supplemented by extra drums that makes the short track thunder along like a gathering storm.
Segueing directly into new track Alchemist, the band then plunge without pause into the foreboding, crepuscular atmosphere of Phantoms.
While the gig is ostensibly the launch of the band’s superlative new EP Ophelia (and the first show in the group’s maiden UK tour) early live outings of new tracks Water Song, Afterlife Community and Oh My Love all compellingly point to the band’s future.
The EP title track, led by Sian Williams‘ ringing arpeggios provides one of evening’s high points, recalling The Verve‘s early outings before ballads got the better of them and Nick McCabe‘s spiralling guitar work was supplanted by string sections.
The slow lament of The Waltz shoots similarly high, a guest violinist adding brittle texture to Adele Emmas‘ keening vocals, the slowly circling acoustic riff and vocal harmonies conjuring up a huge sonic presence from the sparse elements.
This proves to be par for the course for the entire set as the sound created by the trio far outweighs the sum of its parts.
Drummer Lex, his head bowed behind the kit throughout the gig anchors proceedings as Pre-Raphaelite guitarist Sian attentively weaves her six string magic and Adele’s astounding voice swoops and dives.
Concluding with the band’s traditional finale of Bauhaus touchstone Bella Lugosi’s Dead, the sharp creases of the post-punk original are moulded into something more ethereal, bringing a suitably sepulchral end to a spellbinding performance.