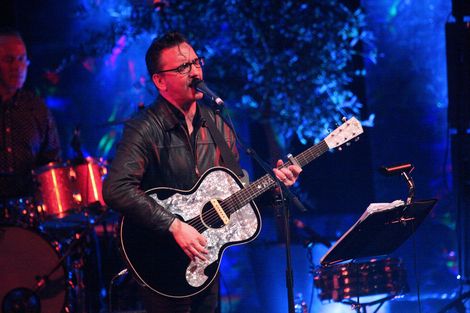 On the day Neil Young announced he was returning to Liverpool, another song-writing, guitar-wielding legend of an altogether different ilk returned to the city.
For almost a decade, Sheffield’s Richard Hawley has been unassumingly building a remarkable footprint in British rock music – crafting five critically-acclaimed records noted for their intuitive lyricism, understated romance and magnificent guitar work. And tonight at the Liverpool Philharmonic, he and his small, yet sonically expansive troupe showcase every facet of their craft.
And boy, does the grand hall play it’s part. “I’m sorry we didn’t come here last time,” he tells the sellout auditorium, “but this place was booked up, and it’s the only place we like to play – I’m not saying the other venues are sh*tholes, but…”
He has a point. As Hawley opens with a crashing version of Standing at the Sky’s Edge, the Phil’s womb-like white walls are transformed into radiating sheets of colour reflecting a stage decked out in a half-moon of spectral trees swaying amid plumes of dense smog as tall silver drapes emit psychedelic washes of colour.
The dual attack of Hawley and Shez Sheridan on 12-string provides a centre-piece for the night, as billowing gusts of thunder echo around the hall while a guitar technician works his socks off tuning up stage right. But this is no Be Here Now wall of overblown bluster, Hawley and co. are well skilled in balancing delicate subtlety with moments of crashing white noise. 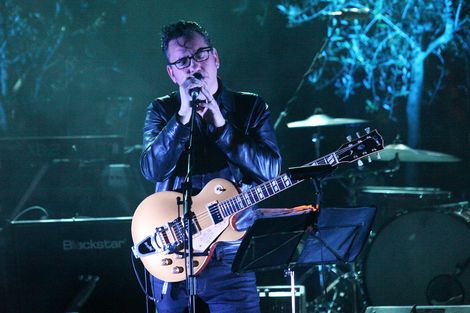 For every Leave Your Body Behind You, another taken from his latest Mercury-nominated album, there’s a
mellifluous Don’t Stare At The Sun, recalling the tripped out beauty of Floyd‘s Meddle-era – aptly written after a session flying a kite with his son. “I was on acid at the time,” he cheekily informs the purring crowd during one of his many storytelling mini-interludes.
Indeed, it’s not just his musicianship, that Hawley is noted for – he’s an infectious and hugely likeable character (should he, Guy Garvey and Noel Gallagher feel like forming a trio of fable-swapping tour mates, we’d defo sign up. The Raconteurs, perhaps?).
And as well as repeated references to the hard-times we live in, and an appreciation for the Sheffield steel workers and their kinship to Liverpool’s own dockers, he delights in sharing jokes (cross-dressing and drug-taking, if you’re interested) with the crowd who are keenly shouting their approval from across the room.
Their involvement oversteps the mark during one key moment of the night – and typically Hawley takes it all in his stride. Beginning Soldier On, Hawley tells us, “this is the quietest song I ever wrote,” and minutes in, just as the proverbial pin is about to drop, a cartoon-like mobile phone starts bring-bringing from the audience. Trigger Happy TV couldn’t have scripted it better.
Where other artists would have, ahem, solidered on, Hawley stops, chuckles a raft of expletives before wise-cracking: “I love Scousers, but I’ll never be able to play that song ever again – you’ve bloody ruined it.”
When the laughter subsides he simply lets rip with a tidal wave of guitar-infused ferocity – Open Up The Door is part festive showtune, part skyscraping heart-tugger, Time Will Bring You Winter chugs like a juggernaut, Down In The Woods is a thigh-slapping rocker while the tender Remorse Code is a finely plucked epic.
Returning for the encore he closes with the tune of the evening – and there were many. The Ocean channels The Doors and hometown boys The Bunnymen, complete with a Jim Morrison/Ian McCulloch mid-song percussive vocal scatting, as the darkness descends on the woodland backdrop, the guitars are ramped up for a final time and the fizzing colours swamp The Phil.
He casually strolls off, two thumbs up to to a standing ovation; we’re left breathless and ever so slightly overwhelmed. 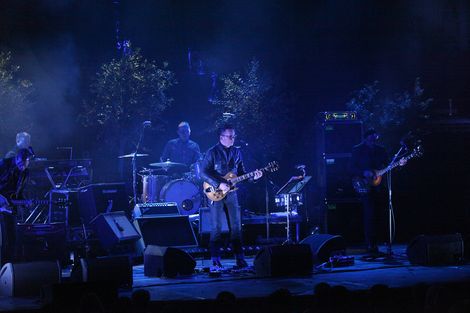 Setlist
1. Standing at the Sky’s Edge
2. Don’t Stare at the Sun
3. Tonight the Streets Are Ours
4. Seek It
5. Soldier On
6. Leave Your Body Behind You
7. Before
8. Open Up Your Door
9. Remorse Code
10. There’s a Storm Comin’
11. Time Will Bring You Winter
12. Down in the Woods
Encore:
13. I’m on Nights
14. The Ocean
Read Getintothis‘ chat with Richard Hawley ahead of his date in Liverpool: ‘The Tories are dismantling our country’.
Photography by Getintothis’ Dave Munn.