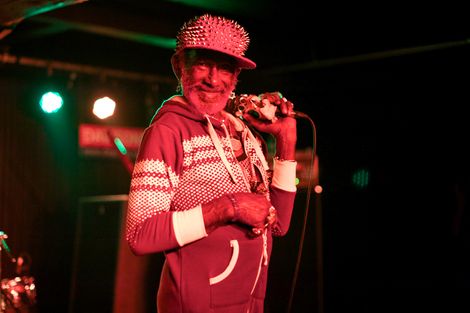 When legendary Liverpool club Eric’s re-opened in late 2011, questions were asked about what role it would play more than 30 years on from its punk and new wave pomp.
Key players within Liverpool music were quick to voice their dissent at a venue seemingly trading on history and heritage, yet providing billings which did little to showcase the Erics’ of old’s trademark spirit. The tide is changing.
During the last 18 months, as well as providing the necessary Mathew Street fare to keep things ticking over all week, the venue is forging a reputation for interesting bookings from scenes that the city has perhaps previously been missing.
Mandolin master Chris Thile and Michael Davis were an early coup, and since then Getintothis has seen and enjoyed the hipster folk of Beth Jeans Houghton, the emotive songcraft of Greg Holden and the syncopated swells of Submotion Orchestra – not to mention a raft of alt-rock favourites like Islands and Shearwater pass through it’s doors.
When a night with godfather of dub Lee Scratch Perry was announced, it was another essential date for the diary. And he didn’t disappoint.
“Are you ready for legend time?,” came the cry. The raucous Eric’s crowd certainly was.
He emerged onto the famous stage in brilliantly baffling fashion, dressed like a Jamaican Santa Claus in fetching red onsie with matching beard and hat, trundling a suitcase (which remained unopened) behind him and carrying a banana (which remained uneaten) presumably if a mid-set snack was needed.
The 76-year-old began with a message for crooks and politicians who would have the temerity to cross him – ‘Drink up your piss, eat up your poop‘ – before lightening the mood with a smile and wishing Happy Birthday to ‘all my babies.‘

Perry offered some essential life advice in dub on Open Your Arms – ‘scratch your head, clean your teeth‘ – and between tracks there were soliloquies and speeches on reggae, religion and just about everything else imaginable.
The Uplifters kept it all rocksteady behind Scratch – tight reggae rhythms, booming bass, dub chops with sprinklings of lead guitar and keyboard fills – as his magical madness floated on top of the music.
Perry proclaimed his love for everyone present on Inspector Gadget and treated us to a jam on Police and Thieves, the Junior Murvin track produced by Scratch at his Black Ark Studio.
As the encore arrived, a slow soul funk groove before a bouncing finish with a reshuffled version of One Drop, Scratch’s sideman divided the audience for a split second with his well-intended glowing praise: “You’re the loudest crowd we’ve had all tour. You’re like the Kop on a Saturday afternoon. Liverpool 5 Swansea 0!”
Lee Perry signed off with his most beautiful and simple message of the entire evening: “Have a good night. Dream with me and dream of peace.” 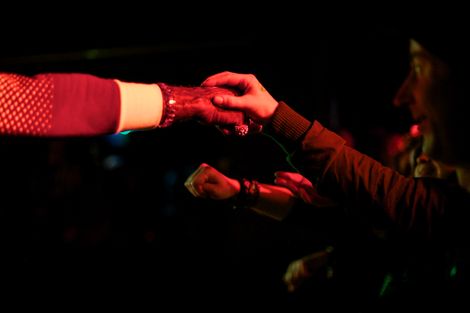