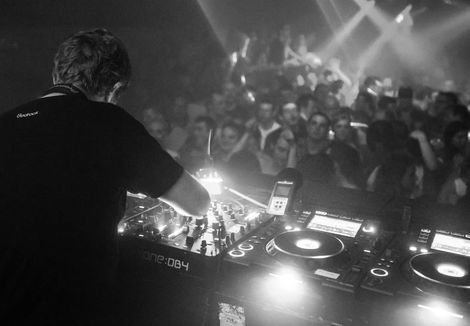 Freeze returns with a stellar line up but the result is nothing but a shambles, Getintothis’ Stephanie Heneghan picks through the wreckage of a rotten night meant to be spent raving.

Freeze are commonly known for using some of the grander venues in Liverpool.
They’ve previously hosted parties in the Anglican Cathedral (Getintothis went – it was an astonishing setting to rave in), St George’s Hall (similarly, as majestic as you’d imagine), Williamson Tunnels (an underground labyrinth of tunnels, man – who can’t be impressed by that?).
So when they announced their Bedrock party with progressive house maestro John Digweed was to be held at Camp and Furnace, our face did the same screwed up sneer it does when we’re trying to do long division in our head.
Camp & Furnace is a cool location, for the right sort of gig.
It’s ace when they have the footie on the big screen, or for a monster roast on a Sunday – it’s even hosted fantastic arts exhibitions and ping pong events. Where else in the city does that? But we’d been there twice over the Christmas period for nights out and it seems awfully lacking as a rave venue.
It’s all about the music though, right?
We clung onto this belief, with a stellar line up as evidence to support it. As well as Digweed, it also boasted DJ sets from Friendly Fires, Leftfield‘s Neil Barnes, disco impresario Greg Wilson and local back up from Jemmy, Adele Moss and Thomas Tuft. That’s a list of names that would outdo any niggles.
Not quite. I’ll be honest, I’ve not had a night out this bad in a very long time.
I’ve tried really hard to find positives but there were very few. Let’s work through this methodically…
First off, organisers insist we arrive for 10pm – or the door is closing… When a night is open till 4am (supposedly), we don’t understand the reasoning by expecting everyone to turn up six hours in advance; especially when they might not be overly bothered about seeing a warm up DJ.
What happens is everyone turns up just before 10pm, there’s mayhem outside the club, two confusing queues and waiting for 25 minutes in the cold and rain. Ace.
On the one hand, insisting everyone arrives promptly may ensure the night’s busy from the off and has a cracking atmosphere – that’d be fine were it not for the main room seemingly a vast expanse of nothingness. The Blade Factory‘s Room 2 – a smaller space, entirely white and clinical in feel, contained but a handful of people and had the atmosphere of a morgue.
Things weren’t any better at the adjoining bar; which was simply a constant queue of pushing and shoving with some braver souls attempting to dance to Greg Wilson (more of this later).
So to the music. Progressive house gets a lot of flack for being the genre of choice for shoe gazing bores.
We’ve never really bought into that, and while we spend a lot of time looking at footwear, they defo ain’t boring.
Saturday made me reassess this viewpoint. I don’t like to be overly critical of those in a warm up slot, because it’s never the easiest job but Jemmy‘s beats fell flat. Digweed, meanwhile, wasn’t much more stimulating.
Meanwhile, there was the small point of Greg Wilson‘s set ending at 12am – (SRSLY, who programmed this night?!) leaving a lot of people confused – he’s got a hardcore following and deservedly so.
So, to the toilets. Oh as IF she’s going to bore on ’bout the toilet situation, you’re probably thinking.
But yeah, I am. Queuing for 35 minutes in a cramped corridor while door staff let their mates jump the queue is bullsh*t. We’re totally calling you out on this.
Let’s move on.
The Aggro – OH YEAH. We saw two fights in the main room, a load of bouncers having a kick off with some intruders who had broken open the fire doors, a general air of unpleasantness and then the place was shut down at 3am by the police because there were gun threats.
This isn’t cool. At all.
The positives?
The lighting rig and set up was ace. The bar staff were friendly and professional despite being under a lot of hassle and we got to see loads of mates we hadn’t seen in a while.
Saturday did damage to a night which had a built up a strong reputation in Liverpool and that’s really unfortunate as it’s grown from strength to strength.
Hopefully it’s a blip and they’ll recover for next time.
It has to be recognised that they promptly issued a statement apologising for the issues (and also the toilets – told you it was important) and I’d be very surprised if they didn’t seriously act on what has happened.
They’re a group of lads who do love music and put their heart and soul into the nights.
But this Freeze event is memorable for all the wrong reasons.