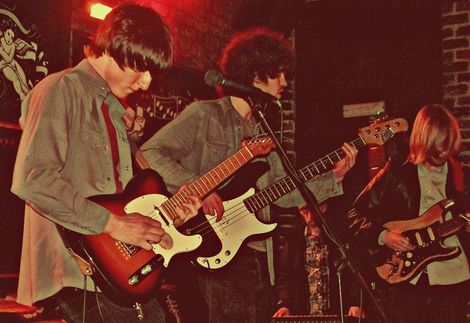 According to a certain go-to online information source for deadline-threatened writers, Sankofa is a Ghanaian word meaning to “go back and get it“, and is often associated with a proverb which translates as “it is not wrong to go back for that which you have forgotten“.
Sankofa have certainly travelled back in time for inspiration. To 1969, to be precise. That’s where Sankofa are, erm, at, musically and spiritually.
These four young men are a band born out of time. It’s like punk never happened. But in a good way. Possibly not coincidentally, they’re from Liverpool, currently home to a plethora of guitar-toting psychedelic adventurers. They should be a shoe-in for the city’s next Festival of Psychedelia.
The rhythm section is central to their monster grooves, and fittingly the bassist stands centre stage, complete with startling afro, his drumming brother in rhythmic arms flailing away Keith Moon-ishly behind him.

Hitching a ride on this eight-limbed groove machine, the twin guitars head for the stratosphere, before threatening to send the band off into the musical universe. I think the word is cosmic.
This state of blissful grooving belies the quality of the musicianship on display, however. They can play, as the lead guitarist, from behind a curtain of blonde hair, rolls out another mountainous riff with a nonchalant flick of the wrist.
The lyrics are almost incidental, an additional layer in the mix. Songs, such as new single Siren Song (available on very retro limited edition 7″ vinyl, of course), lure us away from the melodic shallows into more profound waters.
We’re not sure they’re breaking entirely new ground, but time (and space) is on their side.
Certainly, exposing some impressionable minds at Edge Hill Uni to such expansive influences as Hendrix, The Stooges and MC5, is a risk worth taking if it opens a few more musical doors for people reared on a steady diet of identikit autotuned chart fodder. Let’s just hope those tender minds haven’t been blown in the process.
Earlier, curious students were slowly drawn in by the tender electro-folk-pop of Widnes’ Deafen the Creatures, and also, perhaps, by the untamed vocal stylings of siren Elinor Alicia Gray.
An entirely different proposition to Sankofa, the band supported Kyla La Grange at the launch of Edge Hill’s Arts Centre back in October.
They returned to cement a growing reputation as a young band in possession of a clutch of heartfelt songs, with warm, beguiling melodies, and, in aforementioned Gray, a voice to build nations on.
By the end of their set they had won over a sceptical crowd, and in the process had themselves become energised. Watching band and audience, initially wary, fall a little in love with each other really is a wondrous thing.