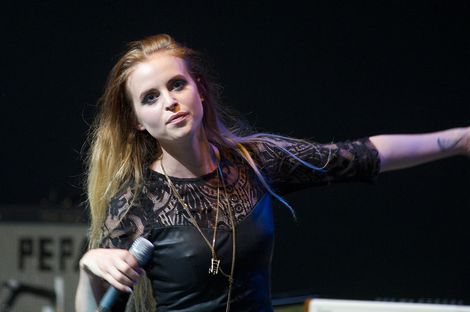 Women with attitude is far from a rare breed in contemporary music. In fact their putting their male counterparts to shame.
Add to this growing list, Kyla La Grange whose debut album, Ashes, aligns her with Tuneyards, Natasha Khan and Sharon van Etten among others, all epitomising fierce confidence with a canon of first-rate music.
Her last gig at London’s Scala featured stilt-walkers and contortionists, and could accommodate over a thousand screaming punters. The new and bijou Arts Centre at Edge Hill University, with a smaller but equally appreciative audience, was then, something of a detour from the path to the arenas.
That didn’t stop her belting out a full band set, although she did disappoint by not delivering her customary bad joke.
The album was perhaps trying a little too hard, overplaying Kyla’s subtly dextrous voice, and with a little too much going on, but live the Cambridge philosophy graduate from Watford breathed life and depth into moody power-ballads like Courage and Vampire Smile.
Single Walk Through Walls proved a crowd-pleaser arriving mid-set while placing a huge tick in the box marked ‘catchy but inspirational’.
However, it’s on the quieter, more introspective moments that she really shines. Relying on that voice, rather than any studio trickery, to deliver moving confessionals about the all-consuming nature of love, she’s at her most effective on To Be Torn. A song for romantic teenage dreamers everywhere, the unobtrusive backing allows Kyla’s voice to take centre stage. Nice ‘Oo ooo oo’s, too.
Again, the simple piano chords that open Heavy Stone set the scene for Kyla’s voice to once again grab the spotlight with minimum fuss. It’s a familiar tale of heartache and woe, but when the band’s backing vocals join in the effect is quite moving, mournfully beautiful but simultaneously uplifting.
A couple of stompers later and she’s gone, but not before a well-received encore, a new one to reward the Ormskirk faithful.
Amid the album’s slightly claustrophobic atmosphere lies an undeniable talent. Kyla’s songs just need room to breathe. 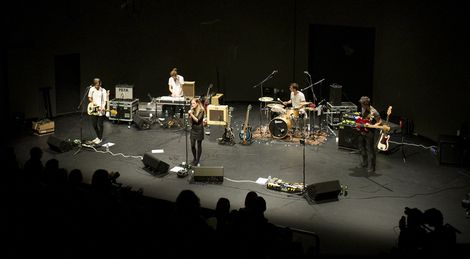 Kyla la Grange at Edge Hill University in Ormskirk
Earlier, Widnes four-piece Deafen the Creatures had charmed the audience with a collection of gentle, folk-tinged melodies, sparsely arranged with a light touch.
But it’s the complementary voices of singers Kieran Joyce and Elinor Alicia Gray that are most affecting. His a husky croon, hers a free spirit, with harmonies to die for. Take a listen – don’t let their warm and generous music fall on deaf ears.