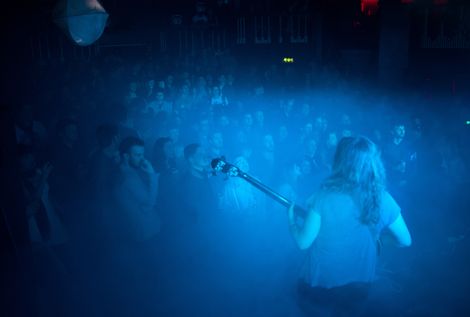 The latest instalment in a long line of weird and wonderful nights spawned from the imagination of Liverpool’s most unconventional of event organisers, everIsland unfolded at the weekend.
Dubbed The Kazimier Moonlight Gathering the venue is transformed into a noir haven, immersed by atmospheric projections, mythical creatures and other bizarre happenings.
Most impressive however is tonight’s line up. Headlined by All We Are and Loved Ones; two of the cities most exciting and innovative new bands showcasing highly anticipated new material and the setting couldn’t be more fitting.
There’s an air of mystery surrounding Loved Ones, since winning the inaugural GIT Award last April, the band have been in hiding putting together their debut album, a re-imagined version of The Merry Monach. 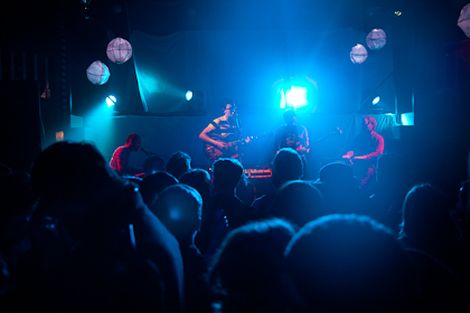 Loved Ones at the Moonlight Gathering.
Nik Glover and co have cemented themselves as one of the most exciting bands to emerge from Liverpool in recent times, tracks such as Are You Hiding Out In Hellhave gained widespread acclaim, so it’s understandable that the band are taking their time writing their full length debut.
Tonight with the Kazimier, cloaked in mystical moonlight, its an apt atmosphere for them to gradually reveal their recent creations and the room is clearly deep in anticipation.
Opening with new material, the band show that they’ve indeed spent their time well, blending their identifiable folktronica style, utilising bigger drum loops and ambient vocals.
It’s a marked step away from their earlier material, lending itself more to bands such as Beach House and vocally, the joint harmonies you’d expect from Fleet Foxes; raw and ambient.
While accomplished, their set feels very much a taster for a band easing into road-testing new material, as a result it’s at times difficult to engage with what’s going on in front of you; they’re clearly a band that sound incredibly strong on record, whereas in the live setting it’s harder to pick between their carefully woven introverted tapestry.
Recent single, Weekends Are Ours sound fantastic, with Glover’s airy vocals resonating beautifully throughout while … Hell is genuine highlight, adapted with softer drum loops, allowing the intricate guitars and frail vocals room to really shine through.
Loved Ones proved contender credentials and are sure to become a powerful force with more upcoming shows.
All We Are, meanwhile, take to a dimly lit stage, dressed head to toe in white cloth over shadowed by a projector screen.
The band have been somewhat unsung heroes on Liverpool circuit for some time. The humble trio released their EP We Hunt in 2012, showcasing deep soundscapes of guitars and vocals, driven by subtle rhythms. 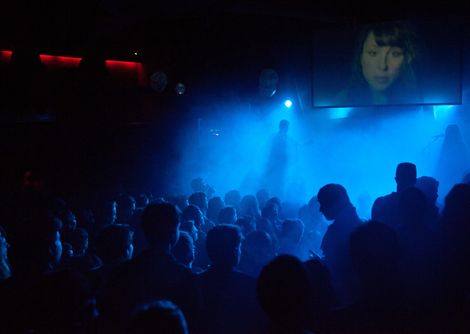 All We Are emerge with a new sound, and new visuals
The band open with new single Utmost Good, as a full light show begins and the mysterious projector screen reveals a string of familiar faces – Stealing Sheep, Jethro Fox, Dan Croll, each individually signing a long to the camera.
Something so simple, but speaks waves about the way that All We Are have grown as part of this local collective of musicians.
The single itself sounds brilliant, with the band grasping a new pop edge, revealing incredibly catchy hooks, a more defined rhythm and group harmonies. The new material is instantaneously engaging and a clear step up from their former work.
For leading single Cardhouse, the band is joined on stage by an assortment of drummers who play along to the heavy percussion, with the chorus sung loud by a captivated Kazimier crowd.
Closing with another new track, guitarist Luís Santos layers his guitar on an loop before storming into the crowd with his tambourine – it’s the perfect finale to a blinding set. Bring on the new album.
Earlier in the evening, Secret Garden Gathering, the psych-folk five piece fronted by Toots La Belle come armed with a dark and alluring sound laced with intricate guitar and an elegant haunting call and response vocal.
King Twit added their brand of upbeat, gypsy-tinged folk pop, bringing together rough jagged guitars and off-beat brass with an air of punk rhythms to get you uncontrollably tapping your feet.
As the room began to swell, Mother Earth take to a smoke-filled stage. The two piece, featuring James Freeman on bass and George Maund on mathematical guitar duties, plus a backing of heavy drum loops, immerse the room into a swell of atmospheric synths before launching into a set of electro wonder.
The band’s set incorporates a range of stylings; from rock to big beat electronica, they underpin it all with technical guitar-bass symmetry which quickly sends the Kazimier into frenzy.
Closing the night’s display of moonlight mystery is the Kazimier Krunk Band – the venue’s in-house collective specialising in carnival-scale hysteria, who have the seemingly-simple power to send crowds into ecstatic all-singing, all-dancing crazed mass of devotees.
Tonight is no different, as the band position themselves within the crowd and do what they do best. A perfectly bizarre close to a night that felt like quite literally anything could happen, one can only imagine what everIsland have dreamed up for next time.
Photography by Getintothis’ Andrew AB