Getintothis’ Tom Dani blows his load as Deap Vally register another notch on their rock and roll bedpost.

We’ve all heard the news, guitar music is dead. Music fans have sharpened up, become more intelligent and now demand more than a few riffs and beats to satisfy their eardrums.
Well tonight we have two Californian girls who beg to differ, Island Records‘ new saving grace of rock n roll and just about the nosiest, grittiest and down right dirtiest two piece around; Deap Vally.
Opening the show are Liverpool psych rockers The Wild Eyes, who blend exactly that; with an ever so British sound of howling vocals, deep bass lines and shattering guitar lines. As The Shipping Forecast welcomes in the initial waves of tonight’s sold out crowd, the band does their best to grab attention, yet their vast sound is slightly let down by an uncharacteristically static stage presence.
The Dirty Rivers have no such problem, oozing charisma and confidence, the Liverpool five-piece launch into an array of good ol’ fashioned rock n roll, as lead singer Mike Ellis stalks the stage echoing a Bobby Gillespie level of bravado. The band play to tonight’s crowd like its their own and follow through with a seriously impressive set with languid guitar squalls rich in dark, beat-driven noise. 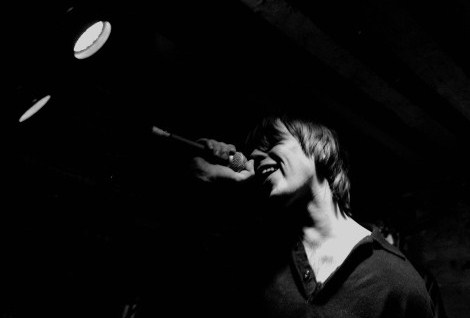 As the room swells to capacity a wave of excitement sweeps through the room. Deap Vally have made their name off the back of visceral live sets and tonight’s crowd expects no different, you have to wonder if this tiny basement venue will remain intact.
The crowd, having occupied every square foot of the basement (and a bit of the stage too) is parted for the girls to make it on stage. Arriving bare footed, bare legged and drinks in hand, Lindsay Troy and Julie Edwards share a quick pep talk on stage for the last set of their European tour.
Opening with new track Baby I Call Hell the band’s sound rips through the tiny white bricked walls, a sound that is heavily geared for the live environment with stomping drums and untameable guitars. It consumes the crowd through an through – seriously, when was the last time you saw mass head banging in The Shipping Forecast?

Moving onto new single Lies, the band apply massive vocal hooks and driving rhythm as the duo’s raw chemistry sees the girls feeding off each others energy, almost in competition to see who can out do the other.
Between songs the two charm the crowd with their casual humour, telling stories of tour antics (Liverpool, The Beatles, The Yellow Submarine and all things touristy are discussed much to the indifference of those gathered), tendencies to never leave a bottle half drank, orgasms as medicinal healing and tales of the walk of shame. 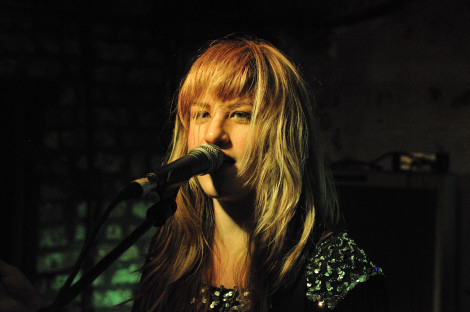 Previous single Make My Own Money serves as highlight as Troy’s cut throat vocals screech through the venue as Edwards sprawls herself across the kit with each beat. The band play like it’s there’s no tomorrow as the crowd gasps for breath in what now resembles a sauna.
If guitar music is well and truly dead, then I guess someone forgot to tell Deap Vally, as the girls proved that they’re on a mission to shake your city to its very core and Liverpool is just another notch on their rock and roll bedpost.
Photography by Getintothis’ Gaz Jones.