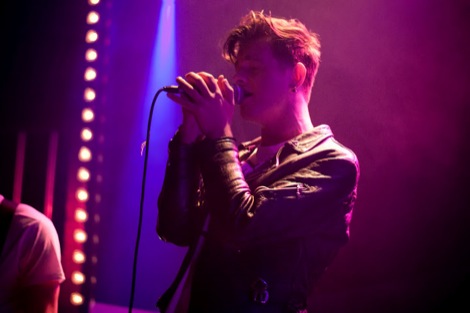 ‘It annoys me when the Swim Deep’s of the world stay in their dressing room and don’t bother to watch bands like us,‘ rasps Oscar Reddrop.
He has a point. They should be taking notes. The energetic and supremely cocksure front man of the Liberty Vessels, spits venom and pointed digs at tonight’s headliners, as his fellow crew, Sam Downes, Zak White and Sam Broadbere, swagger their way through a set bursting with The Smiths‘ urgent jangle.
Their self-assurance extends to a set bursting with a Strokes-esque melodic charm while Reddrop asserts ‘that in three months we’ll know all the lyrics‘ to new track Sleep My Dreams Away.
As they exit the stage, it’s hard to disagree with one lone drunk’s cry of encouragement – ‘fuck Swim Deep‘.

London duo Paradise bring an air of calm to proceedings with their floaty, blissed out, summer indulgence. It’s neat, cosy but hardly exceptional.
Swim Deep, on the other hand, have been high on our radar for sometime, and we were braced for big things. What unfolded was an hour of lifeless, uncommunicative lack lustre indifference.
With the band steadfastly refusing to interact with the crowd, instead choosing to stare at the floor for 60 minutes, it was left to their characteristically sunny vibes to induce some atmosphere.
Big tunes, King City, Orange County and The Sea all stood out yet we couldn’t help but feel slightly deflated by a band that promised so much yet failed to maintain the momentum of their Liverpool counterparts.