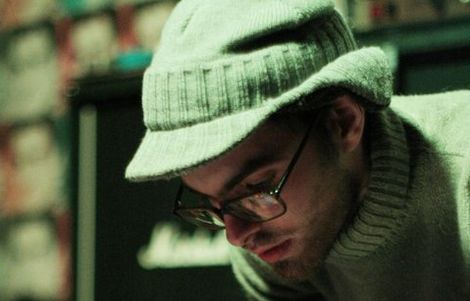 Flights of fancy washed down with plenty of Brooklyn lager, Bold Street Coffee welcomes in a new night brimming with ambition and invention, Getintothis’ Matthew Crist raises a glass.

The Formica tables, the slightly more interesting ales and the unmistakable aroma of Columbia’s finest brews. It can only be Bold Street‘s most famous coffee shop and now host to Liverpool’s newest musical event on this, the opening night.
On an evening more a kin to December than April, the green shoots of local talent were evident thanks to a bizarre combination of folk and frantic funk all in the name of ‘flight and escapism.’ This is a night to showcase the latest musical and artistic talent in the city – A Night of Lofty Ambitions.
With an intro that brewed and simmered long enough to make the coffee percolator jealous, self-confessed, melancholic, folk-drone three piece Trouble with Books chose to open proceedings in their own unique way.
They would go on to wage a full scale war against the general hubbub of clinking beer bottles and infectious chat that had filled the room from the start, a battle they would eventually emerge from victorious thanks to their obscure hum that began like an orchestral tune-up and ended in full crescendo. Only the most hardened pub talker would refuse to give themselves up willingly in this contest.
After the ambient beginning things were cranked up somewhat by the the arrival of Big Effigy (also known as George Maund of Ex-Easter Island Head). His musical beat box of tricks deflected sounds around the room like a demented laser pen on drugs.
A set of electro style glitch was softened by a refracted 80s synth effect and provided an energy that shrunk the room and ensured the Boston Lager continued to flow and the chatter became more infectious.
In a city where it’s as easy to watch unsigned local music as it is to witness a strangled rendition of Deacon Blue on a back street karaoke machine, it’s important to capture the imagination from the off.
And the healthy turn out of hardy souls in attendance suggests the future looks bright for the ambitious and lofty of Liverpool. Here’s to many more nights like this down Bold Street – you have been encouraged.