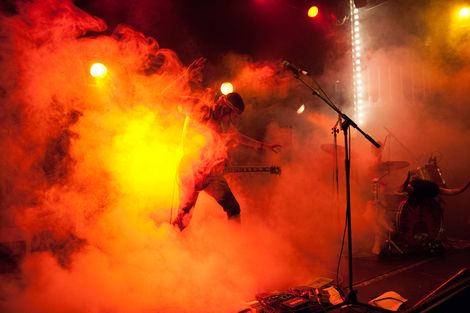 Wet Nuns bring the swagger and plenty of smoking atmospherics to the Kazimier, Getintothis’ Dru Ryder takes it all in.

Ball busting duo, Wet Nuns, slammed on the guitar and beat their drums into submission for the umpteenth time in Liverpool.
Yorkshire duo, Rob and Alexis returned to Merseyside with their rip-roaring riffs and filthy vocals, not to mention their delightful banter, which revolved around the former’s dodgy bowels when they last visited these parts.
Nonchalant and oozing swagger, the band call out for more on stage smoke to increase ‘the vibe‘, as they hop through the air like a pair of hallucinating angry hippies.
Their songs, though, rely on a twisted sense of reality and paired with their dark, dirty blues it proves an irresistible combination. Topless and tattooed Alexis packs a very real punch, smashing his drums to smithereens as Rob wrestles with riffs that made heads slam around The Kazimier.
Don’t take them for granted, this was yet another triumph, leaving heads banging and hearts pumping. 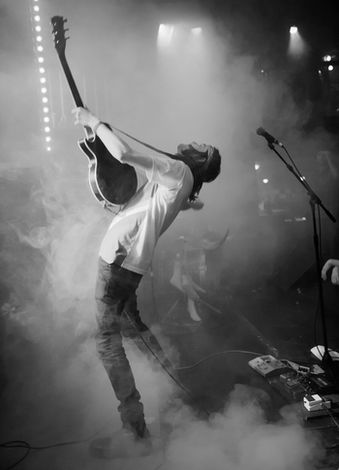 Wet Nuns in action at the Kazimier
Earlier, Stereo Virgins took to the stage with their characteristic sinister goth-rock but failed to illicit anything approaching excitement, instead ploughing something of a trundling furrow.
Salem Rages raised the bar, following with an amazing pure punk gloom that mixed new wave and extreme hardcore. Pausing to dedicate a track to the rodent population of Bold Street their horror theme bled through each song including stand out Love Is Alive (Love Is Dead. Dead good.
Further reading on Getintothis
Wet Nuns, Dirty Vagrants, Bad Meds, Stereo Virgins: Shipping Forecast.
Getintothis on Wet Nuns at Liverpool Sound City
Getintothis on Wet Nuns with The Bendal Interlude, Stereo Virgins.
Getintothis on Bad Meds.
Pictures by Mike Noble.