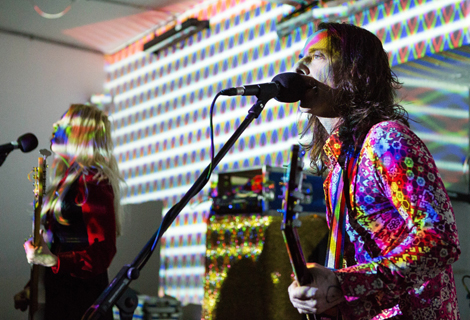 Boasting a back catalogue that would rival the great John Peel‘s record collection, New York’s White Hills are in town with their unmistakeable blend of killer guitar and defiant beats for a show alongside Mugstar and Manchester outfit Plank!
It was Plank! that opened proceedings with a confidence and swagger that suggests they deserve to sharing top billing, and on this evidence who would argue?
Their intense hybrid of prog-rock and bass-heavy instrumental scores justifying the impressive following they have, both here and down the M62.
Talking of healthy followings, this is well and truly Mugstar‘s own back yard. 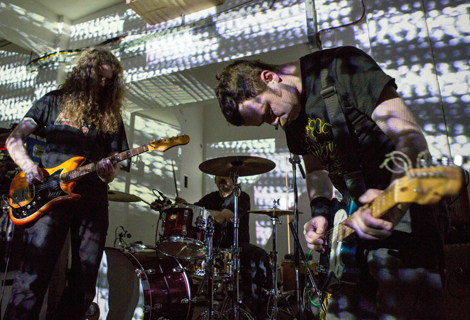 Mugstar at Blade Factory
Their impressive discography ensures the former GIT Award nominees can now consider themselves a trans-Atlantic success who have well and truly put spacerock firmly on the Merseyside map.
Their dramatic and ever evolving soundscape offers up keyboard harmony and huge power chords in equal measure, giving the audience no other option but to throw their hands up and surrender. The bar has been set, and set high.

It may have been well past 11 when White Hills took the stage though they wasted no time in creating a noise and atmosphere of their very own.
Former resident of this parish, Julian Cope, has long championed this band as one of his favourites and their show at Blade Factory was their chance to show why.
Weaving in and out of anthemic chants, hallucinogenic bleeps and at times, chaotic chords, they produce an intoxicating tide of psychedelic and hypnotic waves that will take some stopping. 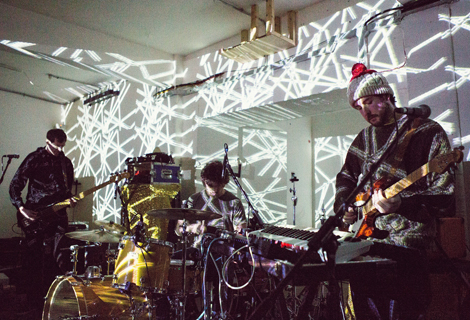 Plank! at Blade Factory
Front man Dave W is in a world of his own with his deep back arches and vicious head movements and by the looks of it he’s not the only one. Vocal performance might be sacrificed in the melodic chaos but that doesn’t seem to bother anyone.
Energy splashes out onto the front few rows in the same way that a killer whale soaks a safari park audience. If this is stoner rock, I’d like to see ten cans of Red Stripe rock.
It’s not just the wall of sound. A visual backdrop of lights and projections that would make Max Headroom blush, take you from the starting credits of Emmerdale to a neon version of Hilda Ogden‘s front room in the blink of an eye, all adding to the sense of being on some kind of journey for the senses.
Breaks between tracks were limited to what seemed to be a matter of seconds before a seamless change into a higher gear for the next.
There are the inevitable quieter moments; this pace could never last, but normal service is soon resumed before this invigorating performance comes to a close with one last energetic flourish that lasts all of 15 minutes.