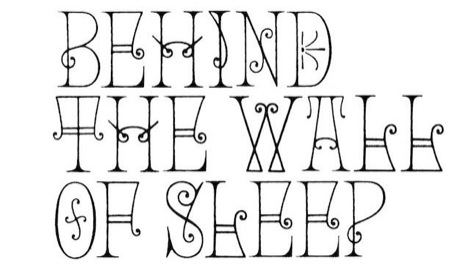 Behind The Wall Of Sleep bring far out sounds from other lands to Liverpool. All hail.

Behind The Wall Of Sleep have been summoning otherworldly sounds to Liverpool since 2010.
In less than two years their shows have become synonymous with explosive, radical happenings.
Be it bringing vintage warlords of metal (Premonition 13), zeitgeist busting hardcore (Iceage), warped orchestrated minimalism (Alexander Tucker) or thunderous existential maximism (Carlton Melton), the Behind The Wall Of Sleep stronghold have ensured crowds in Liverpool have been blessed by a rich tapestry from the sonic fringes.

Mugstar performing at a Behind The Wall Of Sleep show at the Kazimier in April
Like-minded souls, Märc Glaysher, Clifford Unsworth, online magazine editor Jason Stoll and artist Sam Wiehl form the nucleus of BtWoS (the latter two members of Liverpool psych-heads Mugstar) however, characteristically of the city’s current climate, there’s a revolving door of collaborators who make their showcases work.
And what showcases they are. Two BtWoS gigs this year have already cemented their status as ‘end of year best ofs’.
The White Hills gig at the Kazimier back in March was a real coup for the city, bringing the Thrill Jockey duo to Liverpool for their debut outing. 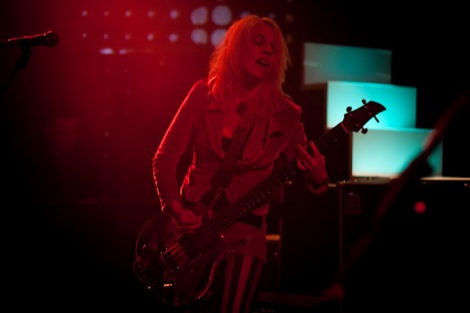 White Hills’ Ego Sensation rocking the Kazimier
On the back of their strongest album to date, Frying On This Rock, mainman Dave W and bassist Ego Sensation (sporting the foxiest shocking-red velvet coat the Kaz has bore witness to) lay down a 70-minute set heavy in slabs of dense drones and wily technical trickery mixed up with some histrionic posturing.
The climatic, incessant throb of I Write A Thousand Letters (Pulp On Bone) a stand out which seemed to echo into the distance of a far off land as Mr W stood bare chested at the lip of the stage, raising his guitar heavenward, dripping sweaty eye-liner like a ravaged Alice Cooper. 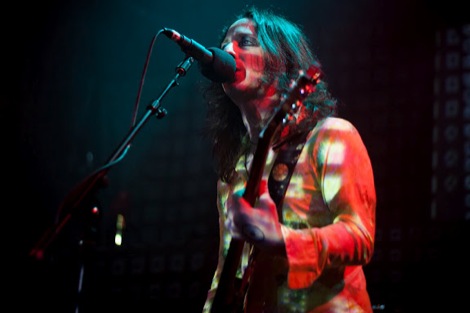 White Hills’ Dave W during their Kazimier date
Better still was the Mello Mello jawdropper when Teeth Of The Sea visited Liverpool earlier that month.
Getintothis has long been a fan of the London quartet, their recorded output a complex fusion of sinister futuristic soundtracks, Morricone brass-infused exotica and cherry-picked progressive guitar carnage with the emphasis on rock. But their live shows are something truly to behold.
Quite simply the Rocket Recordings four-piece are one of the best live bands on the planet. And after hauling their assorted instrumentation into the cramped pocket of Mello’s stage they unleashed a noise of apocalyptic proportions.
Triumphant opener, (and highlight of 2010 album Your Mercury), ACRONYM was played with triple the raging riffs than on record while The Ambassador saw guitarist Jimmy Martin complete a swinging 360° of his guitar – by virtue of the strap and his own neckline – clipping a tuft of standing drummer Mat Colegate‘s hair. Health and safety were thankfully not in attendance. 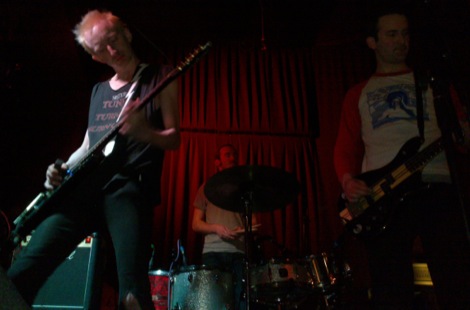 Teeth of the Sea live in Liverpool at Behind The Wall Of Sleep’s gig at Mello Mello
The star of this particular show, though, was Sam Barton, who on Red Soil employed a raging scream which bore all the hallmarks of severed vocal chords while on a new track procured a noise box which emitted a techno-like blast which rivalled any noise Sunn O))) have in their armoury.
Indeed, it was the new tracks which excelled, and left you breathless – their third record is one these ears are super-eager to hear.
But it’s not just the craftsmen from outer galaxies that BtWoS specialise in. Being musicians, writers, artists and big music fans in their own right, they regular unearth several local diamonds on their own doorstep.
At the Teeth Of The Sea show, Mark Greenwood‘s primal spoken-word vehicle EYES offered a glimpse into something uniquely paradoxical – a guitar-inflected poetry offering which was as confrontational and as tense as it was beautiful and nakedly expressive. Music in it’s rawest form. 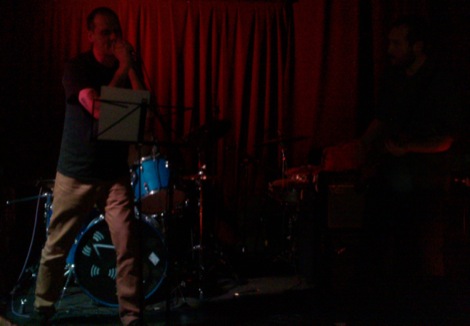 Other Liverpool bands such as Bow and Arrow, We Came Out Like Tigers, Gigantes, Salem Rages, The Bendal Interlude, Conan, Apple Cannon, Mind Mountain, Mother Earth, Spitting Cobra and GIT Award nominees Ex-Easter Island Head have all featured in the space of 18 months.
All from Liverpool, all offering something different, all compulsive listening. 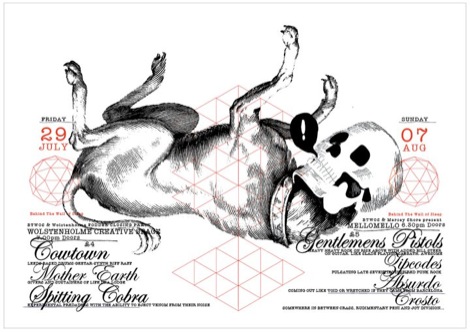 Beautiful artwork and gig posters is customary with Behind The Wall Of Sleep shows
There is however, always a slip up in any promoters canon – and even then, BtWoS create a happening – as exemplified with one of the great gig talking points of recent years, when Stephen O’Malley‘s Æthenor left drunken carnage in the aftermath of their woeful Liverpool offering.
The happenings keep coming, and on Sunday September 23, the team bring another classic-in-waiting as avant-rock Los Angeles outfit Expo 70 line up at Mello Mello alongside motorik Mancunian juggernaut Gnod (another Rocket Recordings beast) and Brooklyn psych specialists Ancient Ocean.
We urge you to get Behind The Wall Of Sleep.

Behind The Wall Of Sleep