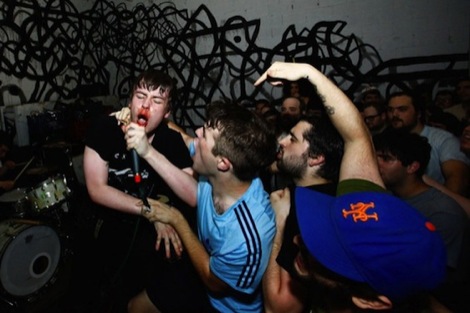 Tonight’s show gave the audience a veritable smorgasbord of what it can mean to be a punk band today.
Here you had past, present and possibly the future of what it means to be carry the heavy burden of following sometimes unnecessarily pantheonised bands from the 80s. The point of punk was to be accessible with an ‘anyone can do it’ ethic, no? That’s another discussion altogether…
It’s a fairly chilly early autumn evening in Liverpool undisputed winner for coldest venue, but in fairness it’s the few venues left that the city can say is really individual. Wolstenholme Creative Space home boys We Came Out Like Tigers are first on, and it’s safe to say that still after all their presence in the scene, the audience seem bewildered at best.
That’s not to slight the band, Getintothis has been championing the screamo quartet for a while, not least with a glowing review supporting Liars during last year’s Liverpool Music Week.
It’s safe to say they don’t pander to audiences, with Simon Barr steadily becoming the most captivating lead singer in any local band – aggressive and animated, and confident on the microphone both from his unearthly mid-ranged growl in song and his truly sincere, if sometimes overly didactic diatribes about society, past friends and the DIY movement.
What’s also worth noting with WCOLT is that for a first time spectator they can be incredibly daunting, I cannot imagine they’d have it any other way.
From the off the music is grand, dynamic to the extreme, change from black metal blastbeats and punishing guitar work to delicate, sombre and slow transcendental textures at a drop of the hat.
The lyrics, while screamed, are clearly audible, with refrains repeated over and over again, allowing the listener slow reflection of what the band are about.
Unfortunately for many the naked earnestness is perhaps too much, which is a shame because while Liverpool still seem relatively unmoved by them WCOLT are making waves across the UK, and with a couple releases coming soon they are really one of the bands to watch over the next year.
Especially after WCOLT, the Down & Outs seem like the perfect antidote for the audience tonight.
In comparison the Scouse street-punk quartet seem relatively light, hackneyed and, well, irrelevant.
The band have been around for a long time now, and to be fair are a lot of fun to watch, but unfortunately it stirs the attention of the 15-year-old Rancid fan in me more than my current attention span can cope with.
Their set is full of fairly run of the mill loud, brash singalongs probably about beer, mates and stuff. They don’t really have anything to say, and neither do I about them, to be perfectly honest. Sorry.
Iceage are an incredibly young group from Denmark who have, rather surprisingly, been thrust into the limelight recently by Pitchfork and other tastemaking cohorts.
I say surprising because they’re not riding off the back of any new punk wave, no real story behind them and no big new scene to speak of from their homeland.
But their record New Brigade is very good, and the same can be said about their live show.
The band look physically jaded, but that’s kind of what they’re music’s about: it’s the perfect combination of youthful energy and agitation with its own brand of teen apathy. Clad in what could be best described as a throwback to the football casuals days, Iceage’s music ranges from Joy Division-esque austerity to almost breezy LA punk anthems, bits of Circle Jerks, Buzzcocks, bits of everything hardcore and post-punk.
But somehow it all fits neatly into one package, like a mixtape made without much attention to being genre-specific.
While they clearly are part of the lineage, Iceage don’t sound particularly like any other punk band around.