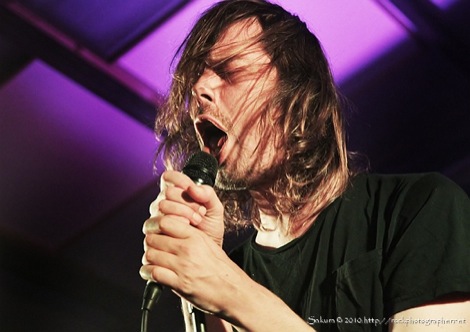 We knew it’d be good, but perhaps not this good. Our independent adjudicator, John Davies, on Getintothis‘ first event as co-host, is in full agreement.

As the first outing for Getintothis as a new promoter the balance of local music to complement the headlining act couldn’t be better picked.
Tonight was perhaps an antidote (at least for me) from the metal-for-Miley-Cyrus duo Sleigh Bells, starting off with another two-piece that could not be further from teenage sycophancy, instead Beast takes us through a hairy half-hour of organ drones, Bach-esque toccatas and motoring krautrock beats. 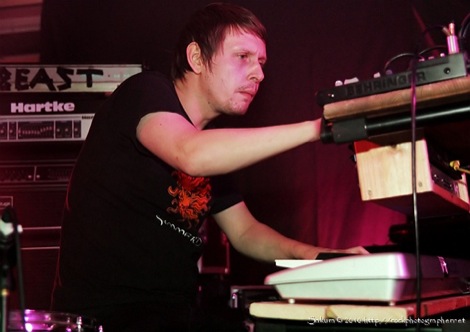 Beast
It wouldn’t surprise me if the band were part of a 90s computer games design team, or at least when they were youngens they would toil away at MS-DOS versions of Wolfenstein and Doom all night.
Admittedly there is a huge degree of camp that runs through these medieval boogie tracks, but there’s something brilliantly psychedelic that runs through Beast and its love of hazy nostalgia, taking a certain sound from previous decades – much like glo-fi and chillwave – but instead of simply recollecting and recreating they extract and magnify elements to create something entirely different. 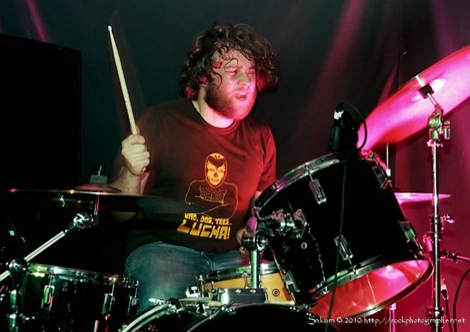 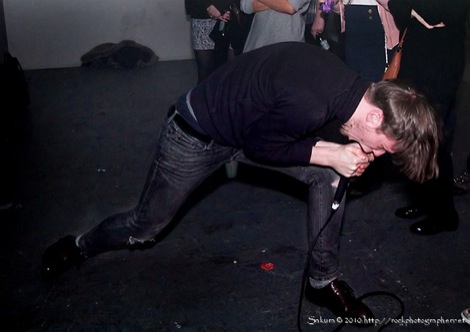 We Came Out Like Tigers
It’s been about two years since Getintothis first heard of We Came Out Like Tigers, stating they were far from the finished article.
However, on arguably their biggest show to date, the band showed they have finally reached their true sound. Gone completely are the easily digestible influences of indie and dance punk, WCOLT kept their skeletal foundations of screamo and adorned it with contrasting moments of pastoral bliss to chaotic black metal. 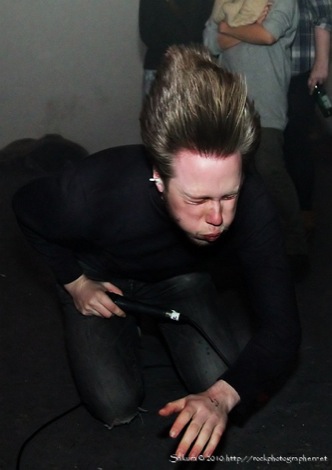 We Came Out Like Tigers
While many hardcore bands in the UK are embracing the latter style, what sets WCOLT apart are the more folk-cum-classical moments thanks to the use of evocative violin motifs, roving melodic bass lines and carefully picked guitar chords, not forgetting the drums that at times sound more symphonic than their punk roots would suggest.
Due to this contrast of claustrophic blast beats and ambience WCOLT’s set is tempered to intensify the already fraught moments of anguish and make the funereal marches that more mournful. If you are ever asked to name a band to counter the Liverpudlian cynic’s assertion that the city is just retro rock and Creamfields, this is the band to be mentioned. 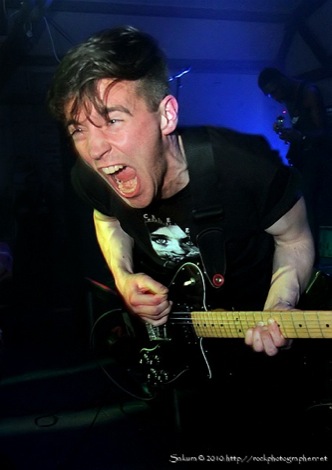 We Came Out Like Tigers
While the last act undoubtedly impressed the unconverted, the next was met with a little disappointment, at best indifference. Forest Swords‘ online presence is second-to-none in Liverpool, his music mixing blissful dubstep and sorrowful soul that can only come from the Northwest, but despite the hype surrounding the DJ one can only feel a sense that Matthew Barnes is not quite ready to be playing live. 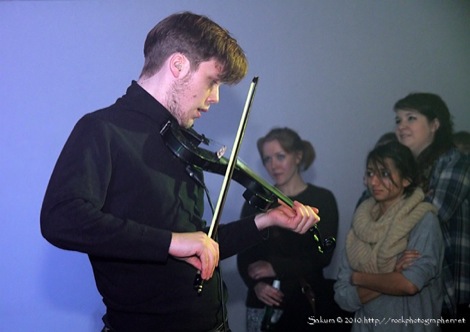 We Came Out Like Tigers
His first set a few weeks back relied too much on tense drifting melodies but rarely providing the punch his fans craved. This time it seemed the opposite, that instead of providing something truly different FS retreated to remixing old dancehall and reggae tracks. In truth it was a good set, but was predominantly like a DJ between bands, without anyone really treating the music as a name in the lineup.
Undoubtedly it will be a matter of time before FS gets the balance right between crowd pleasing jams whilst still pushing hypnagogic pop/drone-step genre even further. 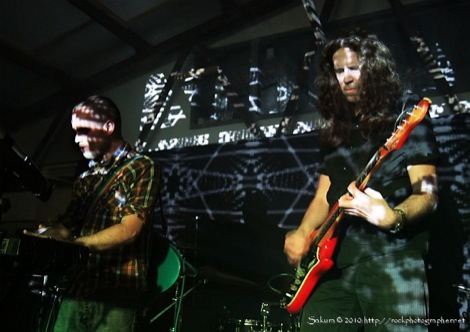 Mugstar
Mugstar, in contrast to Forest Swords, have had their share of gigs over the years to know what the crowd want from them.
Their set relies tonight on patience and a few enthusiastic members of the crowd frantically nodding their heads to monstrous riffage coupled with metronomic drum patterns. 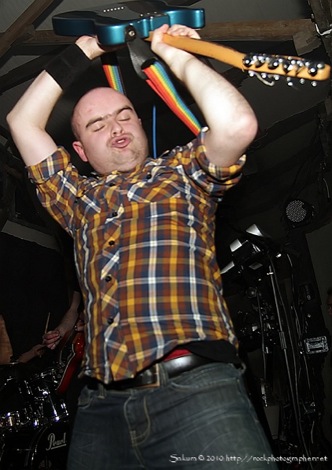 Mugstar
Although to begin with Mugstar‘s set doesn’t seem to be particularly stunning, over the duration of a set the insistence of all the instruments on full blast somehow give a dystopian cinematic effect that is completely hypnotic, which is augmented by the Marcel Duchamp inspired visual projections. 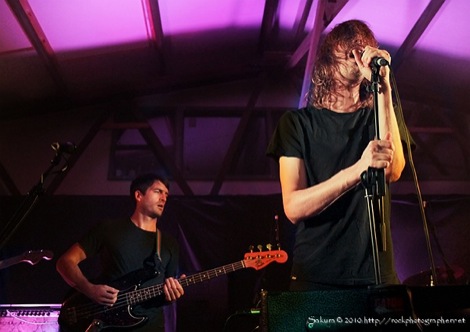 Liars
LA/New York/Berlin trio Liars have musically thrown themselves everywhere, geographically and musically, to find intensity.
While Mugstar were intense in the way of forming a hive mentality from the crowd through kraut-rock rhythms, the headliners (with an added guitarist and bassist) form a more psychotic and unhinged set of songs. 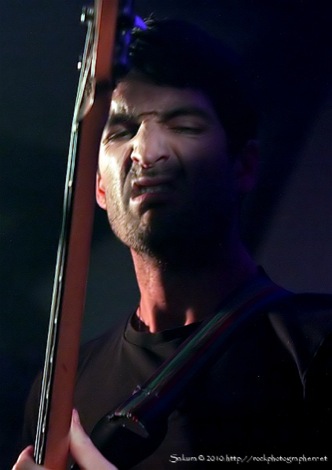 Liars
Ranging from the slightly disturbed calm of The Other Side of Mt Heart Attack to the stomping riffage from Scarecrows on a Killer Slant off their new record Sisterworld, Liars are specialists of manipulating the crowd to feel incredibly uneasy.
Lead singer Angus Andrew was on particularly good form, although his lanky, teenage moustache presence is always formidable, he commanded all the songs in the kind of bent vehemence you’d expect to see from songs inspired by witchcraft and social decay, to then break momentarily to thank the crowd for their reception. 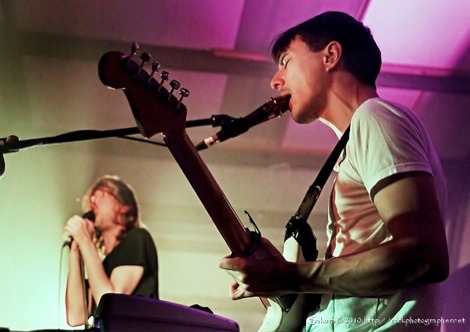 Liars
Although their latest record sounds like they may have unfortunately shaken off the haunting fear found in They Were Wrong, So We Drowned and Drum’s Not Dead, Liars nevertheless still provide some of the most creepy music heard in indie rock.
The highlight of the night’s set was Plaster Casts of Everything, a perfect combination of desperation and malevolent power, a sentiment rarely found in any band’s music, let alone a band as popular as Liars.
Pictures by Sakura.