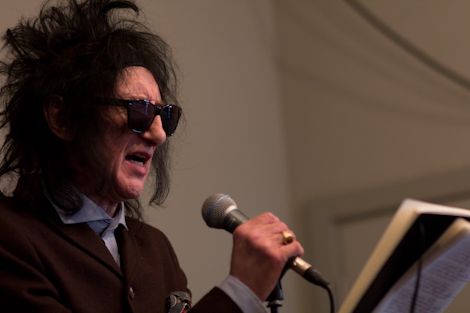 Astride the humble stage stands John Cooper Clarke.
A man personally responsible for keeping the hair spray industry in fine fettle and a permanent hole in the ozone layer. The spindly Salford resident is also a pretty decent poet.
On a gentle, warm May evening Clarke held an intimate audience captive at the newly opened East Village Arts Club. It was only last summer that he did the same at a sold out performance at the Liverpool Philharmonic Hall.
That night the performance poet played for more than two hours and performed only three or four of his poems. A complaint to trading standards would normally have ensued. Except he was both enthralling and hilarious. This evening JCC turns a similar trick but with much more verse.
Due to a broken watch Getintothis arrives fifteen minutes late for this early evening performance which at first was a major problem – we couldn’t see the man of the moment. Stage set in the small front bar, we had to make best leering round corners.
We knew what we were missing though. Hair, sunglasses, pads of paper and legs that go on forever and then some. But not in a Brigitte Bardot sort of way. His mere presence is arresting. 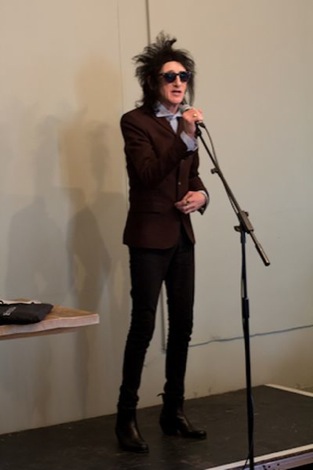 The act is peppered with short poetry delivered in his trademark machine-gun delivery and interspersed with surreal jokes including comments on Jewish people’s thriftiness (apparently he’s not being anti-semitic before anyone complains as he’s ‘half-Jewish’, apparently), the themes of marriage and Alzheimer’s and film ideas.
His alternative to Snakes on a Plane, Parrot in a Car, sounds much more feasible and interesting. Though we won’t do it a disservice in retelling you the plot anaemically. You just had to be there. Which we suppose is the antithesis of the nature of a gig review.
Clarke is entertaining enough without his poetry which, when performed, draws a slight tinge of sadness as well as awe.
The delivery isn’t as polished and stabbing as it once was. This is especially evident when he performs Evidently Chickentown. To expect him to have maintained his slick, rat-a-tat-tat delivery would be absurd. He’s 64 years of age now,. and as the man himself says, “I don’t buy green bananas”. 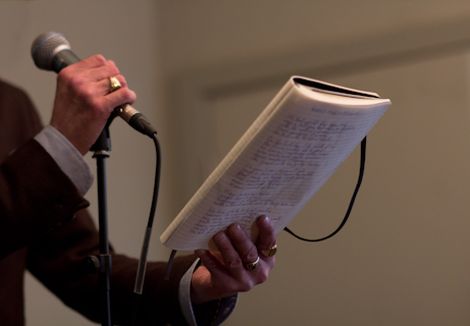 His performance is that much of a spectacle to behold that we could have been sat here for hours and not noticed or cared. However, you can sense that he is feeling cramped by the time constraints as he offers up his grande finale to us, his uncensored rendition of Evidently Chickentown.
The crowd burst into rapturous applause with some whooping as we expect the coiffured one to shuffle from the stage. Fortunately this is not to be. Johnny pours out his venomous yet side splitting diatribe Twat much to the adoring crowd’s pleasure.
He then lingers even longer to witter on hilariously about marriage before giving to us I’ve Fallen In Love With My Wife as a parting gift.
John Cooper Clarke treads from the stage with his notepads and into the back. His wit is as sharp as ever but you sense that a crowd less in love with him would have allowed him to show it. The Bard of Salford was barely challenged throughout. 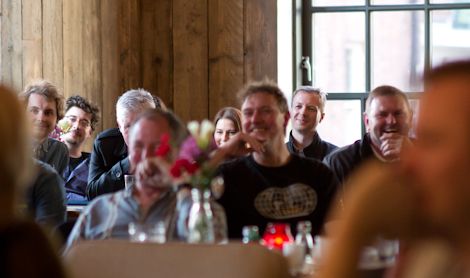