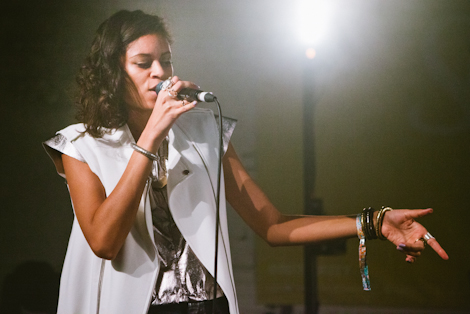 Liverpool Sound City 2013 starts with a series of stand outs and shut outs. Getintothis’ Stephanie Heneghan rocks out before being locked out.

It’s a well known fact that Liverpool always looks better in the sunshine and with weather suitably warm enough to walk around without a jacket on and not risk frostbite. Summer, in other words. We can finally say we’re definitely edging towards that season.
At last year’s Sound City, the Thursday night was a washout weather wise so being able to amble from venue to venue without using a Bido Lito as an ineffectual umbrella was a pleasant change.
However a welcome constant from the previous event was the use of The Garage as a venue, turning a dank indoor car park into a one of the stages. In 2012 it was a much favoured spot and so with Coffee and Cakes for Funerals the first act up in there, this year was getting off to a good start. 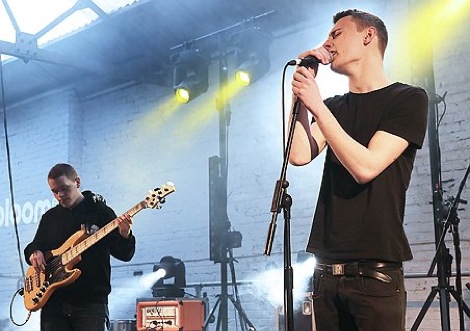 Coffee and Cakes For Funerals – tight and accomplished
After discovering them as a support for the Tea Street Band last year, they’ve become a band we’ve raved on to others about and continue to show why that is. Displaying accomplished vocal performances, with a tight band, great songs and even pulling off a Kanye West cover with ease, they ended their set with the advice to “get really drunk… or high, if that’s your thing”. Sadly the only high I’ll be reaching this weekend will be fuelled by Diet Coke.
Next up was an unscheduled stop off at Tabac for the quickest dinner ever – totally recommended their wedges – before hiking it to the Epstein to catch The Cold One Hundred. Climbing three flights of stairs after scranning a burger is not advised and the plush seating of the theatre was a welcome relief.
Unfortunately the layout made it starkly obvious that it wasn’t well attended but despite this – and also some sound and lighting issues – the boys did good. They’re immensely listenable and tracks Onto The Next One and Smoking Saved My Life sound great, it’s just a shame more weren’t there to appreciate them.
Then to the Kaz Gardens for Moongaiwho were, to be blunt, brilliant. They had the audience captivated, their energy was palpable and the electro pop French four-piece were having as much fun on the stage as off with impromptu jaunts into the crowd to have a bit of a dance. Any set that ends with a surprise burst of glitter ticker tape is going to be entertaining. 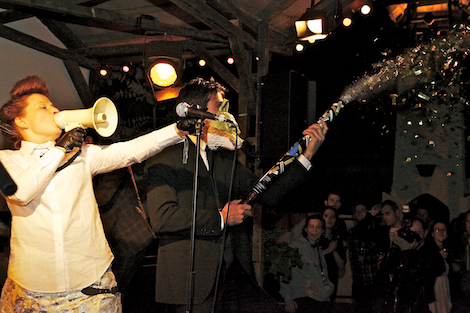 Moongai – fun and, well, brilliant!
We were looking forward to checking out Swim Deep next at the Zanzibar but despite arriving in plenty of time, we were informed the venue was ‘full to capacity, and no point in waiting…‘
Back Getintothis traipsed to The Garage for Jetta who turned out to be the standout of the night. What a voice. Those pipes are BANGING, she completely stole the show. A local girl playing her first ever festival in her home town, she told the crowd how excited she was to be there but the pleasure was all ours, love. Incredible. 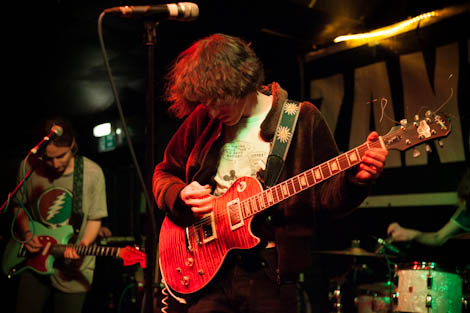 Swim Deep inside the Zanzibar
She made the soft husky tones of AlunaGeorge (main picture) who followed her pale somewhat in comparison. There was a great atmosphere for their set though and Catching Flies got a great reception, as did their reworking of This Is How We Do It.
Got to love that Montell Jordan vibe. Aluna looked like the perfect popstar strutting the stage clad in gold leather and statement earrings, there’s no denying they’re one of the coolest acts in pop currently.
And then to wrap up the night with a bit of Fenech Soler, an act we were really looking forward to checking out but sadly that never happened. After trying four different venues and not being able to find them, Getintothis admitted defeat and headed home to type up this review, listening to them on the ipod. It’s not quite the same but it was the closest we were going to get this evening.