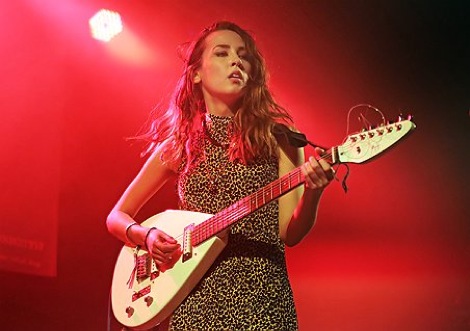 Liverpool Sound City day one delivers power pop, the UK’s next big thing and an extraordinary take on Tom Waits, Getintothis’ Joseph Viney receives a primal boot to the senses.

Well, it arrived in no short order, and Liverpool Sound City promised as much as the balmy summer day it was set against. Bigger and better than ever, the festival appeared to have assimilated the entire city into its programme; no small feat, but one it seemed to adopt with relish. 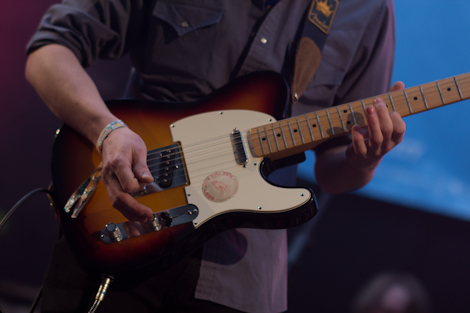 Sankofa – setting the bar early doors
Sankofa had the unenviable pleasure of being one of the first bands of the weekend to take their positions but had no problem in setting the bar early at the Academy of Arts. Belying the early evening pace, the Liverpool four-piece conjure up a feedback-drenched dream of late-60s rock; calling to mind the best of bands like Blue Cheer, with heavy melodic riffing and clean, distinct vocals that cut through the noise. Just the remedy to get people started.
French indie-poppers Clockwork On The Moon lit up the Kazimier Gardens in the increasingly failing light with a resonant collection of songs that wouldn’t have been out of place from any line-up that bedecks a multitude of venues nationwide. A packed garden, running the social gamut from punters to bands to writers to industry bods, all showed their appreciation for the boys from across the Channel.
The Wild Eyes proved to be the first disappointment of the day as a result of their cancellation, but Popstrangers (Sound Food & Drink) proved a handy distraction. Synth-driven, bass-heavy power pop was the order of the day for the Kiwi outfit, proving to be an act worth keeping up with once the chaos has died down. 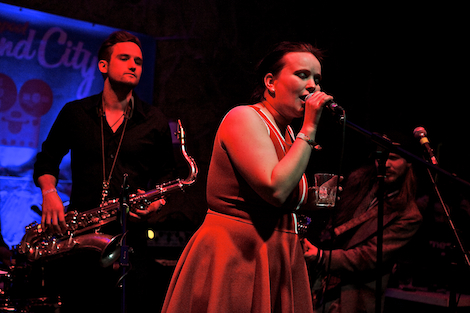 The Tom Waitresses in Studio 2 proved a surprise package
Tom Waitresses (Studio 2), a female-led Tom Waits covers band from Norway, were the surprise package of the evening. Energetic, atmospheric and nothing short of enjoyable, their fresh arrangements of old classics proved that a covers band don’t have to be simply by-the-numbers. Deploying cuts like Alice and November, the wistful eyes of those in attendance locked onto the mesmerising presence of their singer; who prowled the stage and floor with a menace that even the old sandpaper-gargling crooner himself would struggle to muster.
Away from the past and flung very much into the future, those watching Findlay (Main image) at the Academy of Arts found themselves watching potentially The Next Big Thing. The Manchester-born songstress offers classic vocal takes mixed with loud and crunching garage rock backing. It’s a welcome antidote from the usual ‘solo female’ blueprint, and it’s one that will get her noticed. 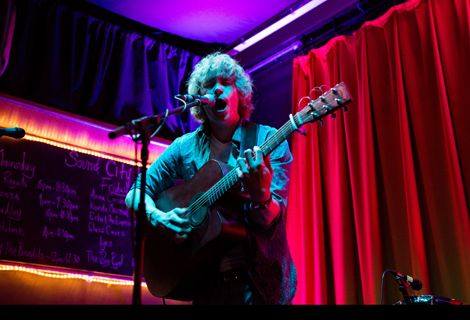 Alex Hulme offerered urgency and energy in Brink
Speaking of welcome antidotes, making noise at Liverpool’s dry bar Brink was solo minstrel Alex Hulme. His urgent cross-breed of energetic acoustic, wild vocals and use of technology marked him out from the rest of the singer/songwriter pack; a genre not known for its frequent forays into originality. Pack up your prejudices and seek Mr. Hulme out for a fresh take on a classic sound. Perhaps you can teach an old dog new tricks after all. 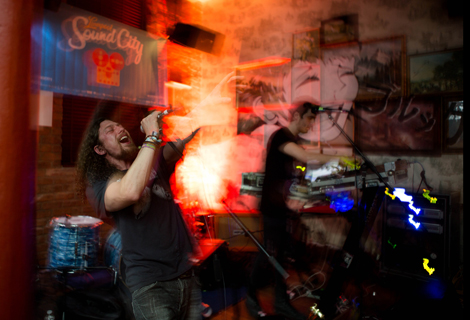 Killaflaw – a boot to the senses
Last, and by no means least, were the devastating Killaflaw, who put their own mark on the end of the night with as much aplomb as Orwell’s proverbial boot stamping on a human face forever. Like some murderous approximation of The Prodigy and The Chemical Brothers, the Liverpool crew gave their all for those in attendance that had been beset by sun, booze and a whole host of great music, still wanting more.
That they delivered was indicative of what lies ahead in the next two days.
Pictures by Getintothis’ Tom Adam, Matt Owen Sakura and Matt Thomas.