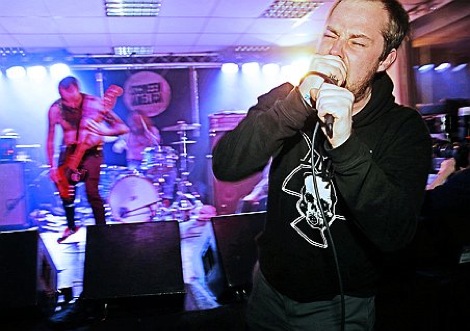 It’s always great when your first band of the festival proves a real winner but it didn’t happen for me this year. A sweat-drenched Zanzibar full to the rafters wasn’t enough to inspire The Family Rain to any real musical heights.
The Bath-based group sounded like they looked – distinctly average. Made up of two twin brothers and their older brother, they promised us a set inspired by the legends of rock in the festival programme but the whole thing felt distinctly flat.
They had that familiar stacatto guitar approach that everyone has been trying to perfect since the first Strokes record and like nearly everyone else they failed to pull it over. 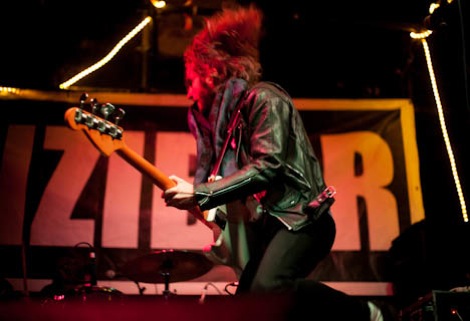 The Family Rain – daft and a bit disappointing
The singer takes to the front row of the crowd near the end in an attempt to inject some real dynamism into things but he admits “it didn’t work” as he returns to the stage. Disappointing.
Next it’s off to Screenadelica for the Iron Witch and yes, we have lift off!
The local lads are a sight to behold, half with their tops off, bulging tattoes to the fore. They take the sarcastic cries of “Chippendales” in the good spirit intended and deliver a blinding set of heavy riffs interspersed with slower threatening build-ups which prepare you for the assault ahead.
Whatever they’re passing round in that hip flask, it’s certainly doing the trick! Several people at the front are shaking their heads back and forth in a most excited manner though I desist due to the recent research showing it can kill two brain cells each time. But hey if you’re going to waste brain cells on anyone, you can do a lot worse than these boys. Catch em soon.
“We’re from Leeds” announces the female singer of Black Moth though she probably didn’t need to bother. Black Moth could only be from Leeds, that northern bastion of dark, heavy rock n roll.
They are a coiled spring of a band, full of sinister intent who would quite like to blow your entire head away, hanging out in the badlands of the rock/metal border and wiping out anything in their path. I don’t think tonight will be their finest hour and I didn’t feel the vocals added much to the overall effect but an enjoyable set nonetheless. 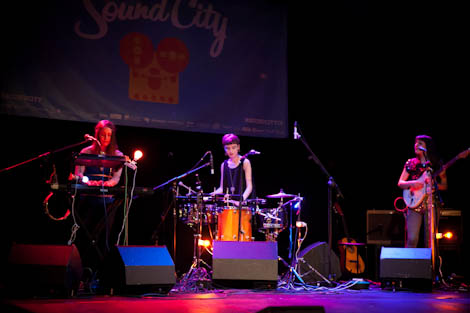 Stealing Sheep offered a change of pace
Finally a distinct change of pace and it’s down to the Epstein for Stealing Sheep, Liverpool faves and recent GIT Award nominees for their impressive debut album.
By now with a few scoops under my belt, I’m ready for a bit of a trip and our three glitter-clad heroines instantly transform the scenes to somewhere in middle England round about 1583. Their medieval harmonies have an almost hypnotic quality, as if they’ve delivered some sort of psychedelic potion to the brain with their chant-like folk intonations. In our brain, we’re seeing Kate Bush‘s three younger sisters being pursued across a field by Tess of the D’Urbervilles while Arthur and the Knights watch on from the sidelines.
My only worry is that it can all sound a little samey, although this is offset with the arrival of a 10-strong marching band in support late on. The chap on the front row of the balcony is desperately trying to get his paper aeroplanes to float down to the Epstein stage but, unlike most of his efforts, Stealing Sheep may be ready to really take flight.
Pictures by Getintothis’ Sakura and Marie Hazelwood.