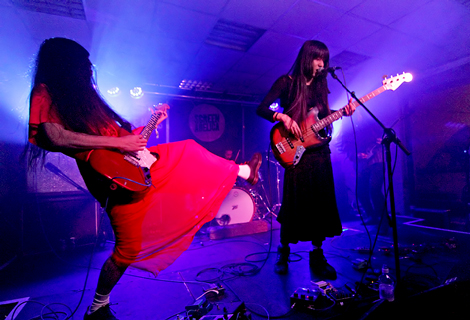 And so, it’s time to say goodbye for another year.
And the final day of Sound City couldn’t wish for a much better start than Bleech in the basement of the Shipping Forecast.
This three-piece produce a scuzzed-up grungy treat, crucially never losing sight of the need for some melody to underpin the noise.
Upfront, Jen and Katherine on the guitars have bags of attitude, reflected in some biting lyrics as Jen tells some useless paramour “being loved by you is a waste of time“. There are hints of Garbage and even Kristen Hirsch‘s Throwing Muses in their more dizzying moments. 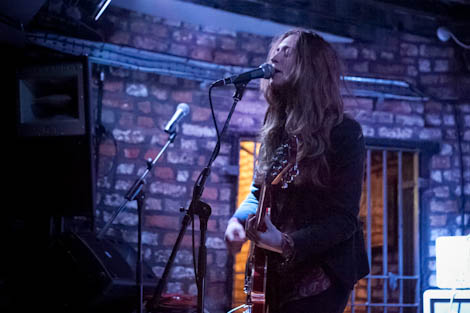 Bleech – noisy scuzz at the Ship
Mondays seems to scream a simple joy in just being alive – even on Monday mornings – while upcoming single Not Llike You kisses you round the chops with a big slabbering chorus for good measure. Game on!
Over at Leaf, French Films are another winner, a band who simply produce a wonderful sound which reflects their influences but distils them into a dreamy rock/pop cocktail which is very much their own.
They are in fact Finnish rather than French but the major influence seems to be the Velvets and almost by extension, the Mary Chain, although minus the howling scrawls of feedback.
The two frontmen share lead vocal duties and it all adds up to a band who seem incredibly confident in their sound and their songs. I’ll be tracking down both their albums.
My festival ends probably the way every one should, with the thrilling spectacle of four-piece Japanese ensemble Bo Ningen thrashing the hell out of their guitars in a speed-thrill ride which somehow manages to eek the very last drops of energy out of the festival crowd as they throw themselves with happy abandon into an impromptu moshpit in Screenadelica. 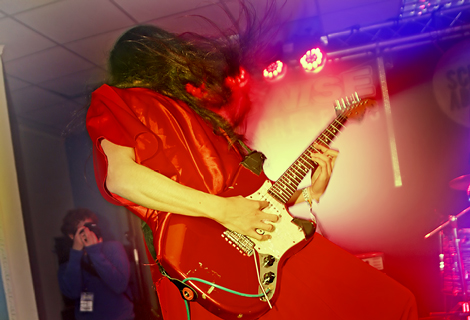 Bo Ningen – quite the way to finish a festival
Getintothis meets a couple who have seen them six times in the last few months and you can see how their charming nihilism could become seriously addictive.
We’re not sure it tells us very much about my life (co Morrissey) other than the fact the electric guitar played very loud and very fast and is a wonderful thing to behold. Maybe we just don’t need anymore than that!
Farewell Sound City 2013, can’t wait for next year already.
Pictures by Getintothis’ Sakura and Marie Hazelwood.