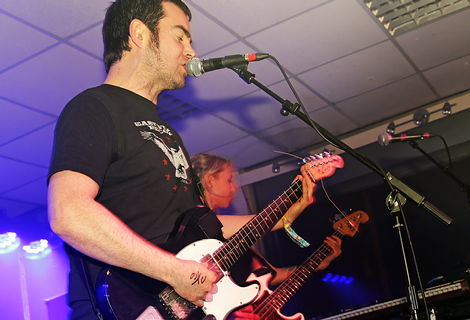 Tired eyes and weary bones were on the menu as Sound City rolled into its second
day.
Day one proved to be something of a mixed bag depending on who you saw
and where you were, but an organisational feat so large was never going to run with
100% alacrity.
Nonetheless, cooler temperatures prevailed after the prior day’s baking heat and any mishaps were swiftly forgotten as the city prepared for another wave of music, drink and mayhem.
The Epstein Theatre was the place to be in the early afternoon. A conference held by the brains behind The Anfield Wrap saw distinguished speakers such as The Farm’s Peter Hooton and The Times’ football editor Tony Evans wax lyrical on the growth of football culture; part sport, part fashion and part music.
No ultimate consensus was ever going to be reached, but the community spirit fostered by those speaking gave rise to the hope that despite its billionaire playground status, the beautiful game will always be propped up by its fans and commentators.
Immediately after, music mogul and former Rolling Stones manager Andrew Loog Oldham made with the amusing anecdotes and imparted wisdom that only a man of his experience could muster.
Those in attendance were left wide-eyed and open-mouthed at tales of debauchery, debates on a young Mick Jaggers’ androgynous persona and the perks and pitfalls of drug use. If there was a lesson to be learned, it’s the same one ya mum told you when you were trying to attract the opposite sex for the first time; JUST BE YOURSELF! It’ll soon fall into place.
A bright start to the day was aided by the bands on show, and one of the first acts
of the evening, Vasco Da Gama (Academy of Arts), proposed their own brand of sunny pop mixed with jagged rhythms that called to mind such old masters
as Captain Beefhearts’ Magic Band.
Hotly-tipped and with a brand new EP Geography now available for consumption, get ready for these lads to bust out of their hometown confines ASAP.
Not long thereafter, the same venue was dazzled by the pristine beauty and lush
vocals of Chloe Howl. Remember La Roux? Yeah it’s asking a lot, but Chloe Howl has grabbed the baton of strong, electronic-led pop tunes and taken it further than ever before. The Londoner was in fine form, and should she be back next year, wouldn’t be too cheeky in expecting a much more prominent billing.
Screenadelica has been one of the standout venues of Sound City thus far, and their Friday night line-up was no exception. The venue’s first act of the night were the ever-superb Alpha Male Tea Party who, in between a devastating aural assault on a swollen crowd, attracted a great deal of photographers and crowd hype. A new record is imminent and it will be huge; keep your ear to the ground for that one.
A hop, skip and a jump (maybe a stumble or two) to Parr Street’s Attic wherein the South American contingent of Sound City had assumed residence. Argentinean five-piece Underdog were a complete revelation, bringing big sounds and soaring vocals to a venue not typically regarded for its groundbreaking forays into live music.
The Ocean, featuring members from the prior band, carried on much in the same style; even finding time for a dirty, power-chord driven version of Depeche Mode’s Something To Do. Let our respective nation’s politicians get on with the in-fighting and posturing, because it’s fairly obvious that we Brits and our Argentinean friends have much in common; a desire and drive to create and listen to fantastic music. Viva anthems…as they probably wouldn’t say.
A little tumble down the stairs laid bare another example of how Sound City
has fostered fantastic relations with international acts. South Korean hippy-types
Goonamguayeoridingstella (try saying that after a few) were just about the happiest band you could ever see.
Welding pop tunes with lashings of guitar feedback and the bounciest keyboard player since Rick Wakeman packed in his vices, Goonam had the place rocking; even bringing out the best and worst displays of ‘dad dancing’ this side of a raucous wedding reception. Make sure you head to the Korean showcase at Kazimier Gardens on Saturday to catch them and three of their contemporaries.
The Boy Royals (Brink) have supported the likes of Feeder, The View and Hard-Fi and their sound is very much in the same vein; a glossy surface and high-tempo chorus led rockers. 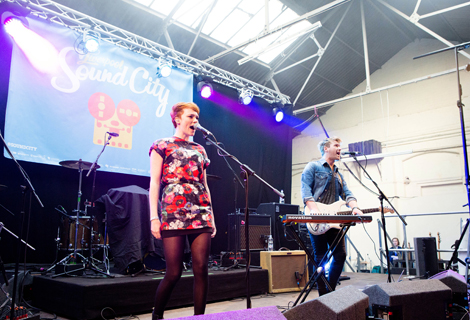 Chloe Howl – electro pop cheeky goodness
Songs such as Eighteen and People Like Us are almost guaranteed to be the soundtrack to somebody’s adolescence, but for those who have been around
the block, it’s all been done before. You can’t fault their enthusiasm, but there’s a
market they belong to and an earlier set in a more spacious venue might have done
them a world of good.
One of Liverpool’s finest underground labels, promoters and all-round agitators
Antipop hosted a typically intense showcase at Sound Food and Drink.
One of their finest acts, the twin-bass devastator Super Fast Girlie Show, brought the building to its knees with their wild combo of Motorhead speed and Black Sabbath riffing. If you like it loud, heavy and inherently disgusting, then this is the band for you. Blistering tracks such as Mind Control, with its hellish refrain “if they say I’m goin’
crazy then I must be goin’ mad!”, offer more truth in 90 seconds than most bands dole
out in their entire lifespan. See it, share it, love it.
Police Squad gave their all to a frustratingly empty Krazyhouse, evidently a venue not particularly suited to their dreamy sound and angular rhythms. Something of a shame to see them disappear in the abattoir-esque surroundings, but a good band will take it all in their stride.
…and last, but by no means least (as the cliché goes), were Future of the Left
(FotL), seeing out the night with a pulverising display at Screenadelica.
Lazily dubbed ‘cult heroes’ (a byword for those who can’t really deal with it), the Welsh group (with a touch of Aussie on the bass for good measure) inspire nothing short of manic devotion in their fans.
Opening with Arming Eritrea and not letting up for the rest of their set, they set about justifying both their relative longevity and knack for a cracking tune beset by voice-breaking vocals, weird and wild guitar lines and lyrics imbued with a charmed kind of cynicism. Falco (vocals/guitar), formerly of mclusky, allowed one brief foray into his own personal back catalogue with the mind-bending Lightsabre Cocksucking Blues. It would be something of an understatement to say that the crowd went wild.
A suitably manic, sweat-drenched ending to one of the most memorable days in
Liverpool’s music calendar. One day left; we might end up like Dennis Hopper’s crazed photo-journalist from Apocalypse Now yet…
Photograph by Getintothis’ Sakura and Tom Adam.