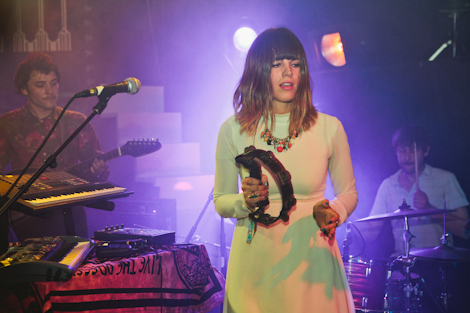 French muscle and melodies, indie-angst-pop, the fifth Beatle and audience participation were on the menu for Getintothis’ Liam Fay on Sound City day two.

After my first day at Liverpool Sound City fell a touch flat I had big expectations for day two. Especially when Getintothis discovered we had Melody’s Echo Chamber at The Kazimier on the agenda.
Melody’s Echo Chamber is the brainchild of Melody Prochet and Tame Impala’s main man Kevin Parker. The resulting sound is one of melodic French pop with some muscle and fuzz.
Prochet appears delicate centre stage as she releases those sweet, sweet vocals from her lips.
Seemingly effortless. They fly away from her like doves. If it wasn’t for a minor blip with their opening gambit, I Follow You, this would have been as perfect a set as you could wish for.
Prochet’s tender vocals go a touch flat and are completely swamped by her band.
The issue is immediately resolved and the rest of the gig is an absolute barn storming effort. They rarely miss a chance to elongate the endings and throw some beefy bass into the mix and really wig out. 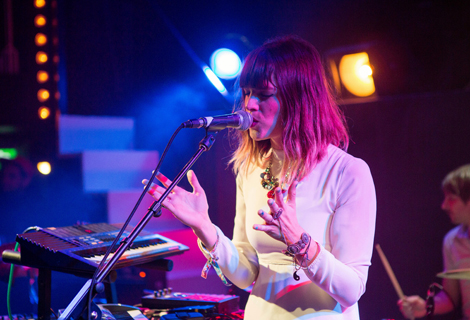 Melody’s Echo Chamber – effortless stuff in the Kazimier
On more than one occasion does Prochet have the audience enraptured only to then have the spell completely smashed with a flick of her hair and a ferocious lunge of bass. She then recaptures the masses at once and at will.
Ferocious, orgasmic bass was prevalent throughout. Highlight of the set has to be Quand Vas Tu Rentrer? Beginning with breathy, bouncing synth the song swells as all of the intricacies gather and meld into one glorious bass driven Franco-cacophony. 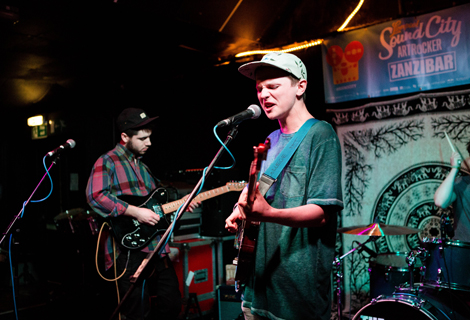 Moats – angsty pop snarl in the Zanzibar
The day started out with some noughties, indie-angst-pop from Moats whose tempo changes would have to be counted on some sort of giant abacus.
This is certainly no bad thing as it keeps the punters interested at The Zanzibar as, for once, there was barely any chatter as the dense vocals cut through the air with the lyrics hanging damp over our heads. Toothache is a standout with its angular feel and snarl inducing beat.
With a mix up over The Dirty Rivers confirmation we were free to go for a wander, happening upon Dan Croll’s set at The Garage.
He is a joy to behold – the lovable, funky fifth-Beatle. Getintothis already prefers him to John. Everything about this set was amazing, in particular the harmonies between Dan and Jethro Fox on Only Ghost. It’s hip-shaking, foot-tapping fun and it makes the girls dance.
That’s always a good sign. He closes on a soft, scousy-lullaby which ratchets up the noise to a soaring crescendo before leaving us, in a car park, with leaky portaloos in the corner. 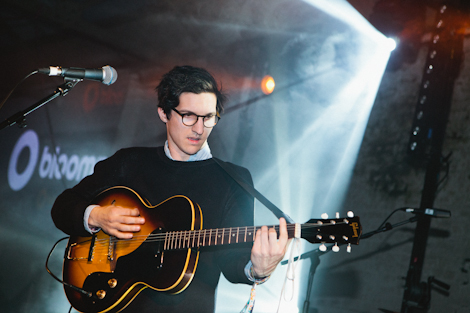 Dan Croll evoking everything just about amazing
Silent Sleep brought my second day to a close at the Black-E, which is an odd venue resembling a courtyard at a low budget prison, with what was a subdued, reflective affair.
Until a twist left everyone with a smile on their face. Christopher McIntosh uses trumpets and a choir well to big up his solemn sound. Nothing is quite as overwhelming as the deep, introspective lyrics though. As he points out to those stood by the bar babbling away “We’re trying to be absolutely, fucking sad here“. 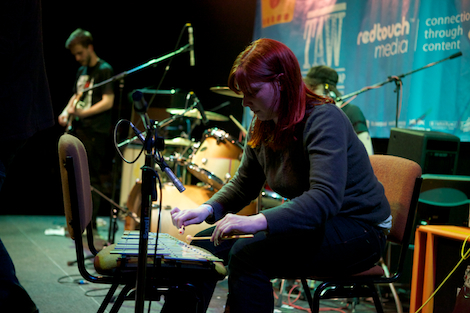 Silent Stuff – thrilling and emotive in the Black-E
Silence and attention is a must. As McIntosh introduces his last song, On the Steps of The Bombed Out Church, he decides, on a whim, to take us all out to staircase with the tall domed roof.
And so, with us below and surrounding him on the staircase Silent Sleep brought their kit out and serenaded us with this sweet, tear jerking number.
There was even some audience participation with some rhythmic stomping and clapping. Which was great. I’ve always wanted to be part of the show.
Pictures by Getintothis’ Conor McDonnell and Tom Adam