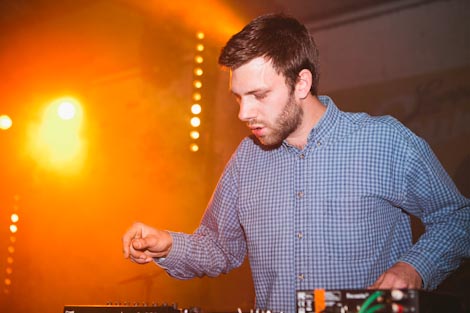 Liverpool Sound City closes with glorious folk-pop in the Kazimier Gardens, Polish pop in Mello and a fusion of rock and rocking rave in the Garage, Getintothis’ Stephanie Heneghan has a ball.

Logistical issues, namely the complete lack of hot water to shower with and the 45 minute bout of sulking that followed, meant that our final day of Sound City festivities got off to a tardy start.
Luckily for us, The Ramona Flowers had issues with failing electrics which meant we got to see the five piece’s entire set – a set they admitted they were “making up as they went along“.
For an off the cuff concoction of their songs, they didn’t ‘alf do well. Tokyo, Brighter and Lust and Lies all featured and their energetic electro indie pop was exactly the kick-starter we needed to get our night going. 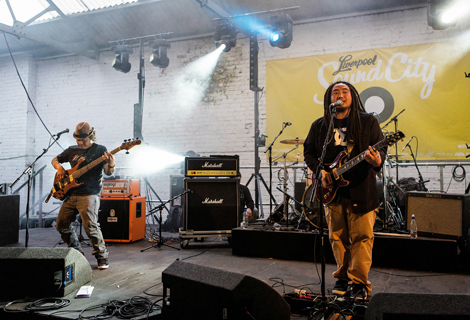 Matzka – rocking it in the Garage, early doors on day three of Sound City
Sadly the next act up, Rubberbear, sucked the vitality out of the room and after enduring two tracks we decided to take proceedings outside and make the most of the last of the Saturday sunshine by checking out the lovely Laura J Martin who had the audience in the Kazimier Gardens captivated.
We don’t want to appear patronising when we call Laura lovely but she is just that, she’s polite and charming and there’s something enormously likeable about her. She’s also hella talented, rocking a mandolin, flute and keyboards throughout her folk pop set, while manipulating an FX board with her feet. If ever there was a girl who deserved success, we’d nominate Laura. 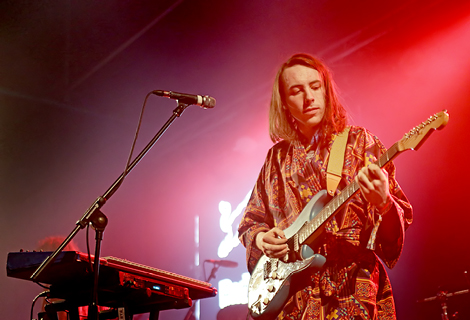 Egyptian Hip Hop – brisk psych pop and rather lovely
A quick stop off to see Kamp! (important exclamation mark right there) in Mello Mello, a Polish pop band who are Quite Good and then heading to the Academy of Arts for Egyptian Hip Hop. Apparently this was the Official Closing Party for Sound City but quite how it differed from any of the other venues we were hard pushed to see.
Despite their exotic moniker, Egyptian Hip Hop don’t hail from Africa (we were going to try and shoehorn a poorly thought out denial/the Nile pun in here but it was too much brain power to pull it off successfully) and their sound has very little in common with hip hop – let’s call it accessible psych pop for want of a more specific genre.
They’re on stage for just under an hour but they’re fun and enthusiastic and the audience bounces along with them as they rattle through their set with driving basslines aplenty. Showcasing a handful of hits from their recent album Good Don’t Sleep, the end of their stint on stage seems to come remarkable quickly – there is a slight possibility this might have something to do with the Redbull recently imbibed. 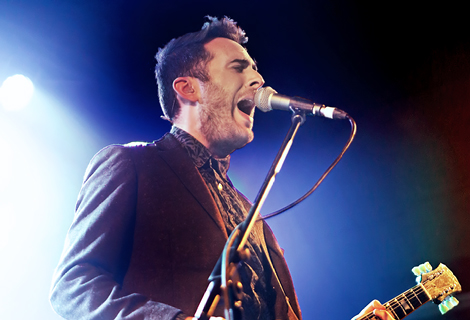 Delphic – mixing it up at Sound City
They hand the reigns over to Delphic, a band who we love and whose recent show at the O2 Academy brightened up a weary Valentines Eve for us.
Their set tonight is slightly less successful, we’d hazard a guess that the change in track order on the set list played a part in this. Instead of mixing up the more well-known tracks from their previous album with the occasional newbie, they seems to do the opposite which is fine for those who are au fait with the latest drop but leaves some of those in attendance looking confused; admittedly it is a bit of a change in musical direction.
We can’t stick around though, it’s time to catch the act we’ve wanted to see for the past three days, nay, the past two years in fact.
Those two years have been spent boring our friends, family, that lad in Tesco that you’d probably say yes to if you’d had a bevvy, about Mount Kimbie and finally our time has arrived. 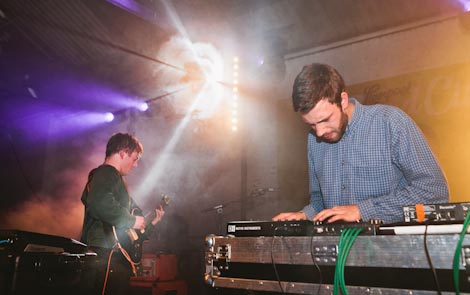 Mount Kimbie – killing it in the Garage
Fittingly they’re playing in our favourite Sound City venue, The Garage, and this could either be one of the best gigs of our lives OR more of an anti-climax than a quickie round the back of Old Hall St Tesco.
The mere fact that we didn’t take any notes for the entirety of their set is evidence that it was most definitely the former.
The only evidence on our phone was a text sent to a friend that said “29 seconds in and Mt Kimbie are KILLING IT” – which is a fair assessment.
They pulled off a mesmerising performance, no easy feat given that they are essentially two lads and a keyboard.
A heady mix of ambient dubstep and intense electronica, they dropped our favourite – everyone’s favourite? – track Maybes in early on in the set, with tracks such as Carbonated from Crooks and Lovers mixed in new material from their yet to be released album Cold Spring Fault Less Youth. It was flawless, and we don’t dish out praise like that easily.
A false finish and a surprise encore saw us exiting The Garage before pegging it back like Usain Bolt needing a wee, and after we’d made sure they definitely finally COMPLETELY had finished, we headed to The Kazimer to see Ellis and Jay DJ into the small hours until it all got a bit hazy.
2013 was fun, thanks for having us Sound City!
Pictures by Getintothis’ Sakura, Conor McDonnell and Tom Adam.