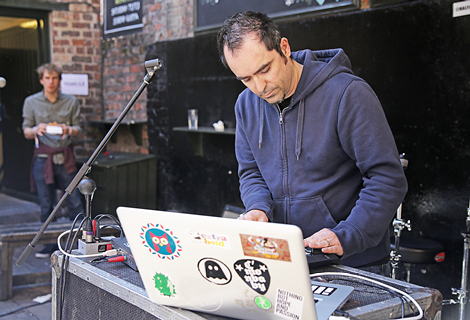 Liverpool Sound City concludes with a marathon set from Dexys and a marathon sprint around all corners of the city, Getintothis’ Alan O’Hare has his mind bent and his body close to broken but left buzzing.

Buying a pint inside a cathedral is a strange thing.
But then there were a lot of alien experiences happening on Sound City Saturday. Town was buzzing and although it was derby weekend, football seemed to be the furthest thing from everyone’s mind.
Up at the Anglican Cathedral, the town’s casuals were out in force for Dexys. It’s the second time Kevin Rowland‘s rebranded group have come to town since last year’s ‘One Day I’m Going To Soar‘ comeback album.
Last time, in the Philharmonic Hall on Hope Street, we knew what we were getting: the new album, in full, and then a couple of favourites for the encore. Those still paying attention, knew that the Sound City show would follow the same format and offer no compromise for a festival set.
The music was great. The band’s performance was top drawer. But the natives were restless. Sure, the first few hundred got stuck in down the front and loved it. But towards the other end of the cavernous venue, attention wandered, tongues chatted and feet shifted.
A shame – as Kevin Rowland is leading one the best bands out there right now. The riffs arrive on horns and fiddles, two keyboard players allow the organ to wash over keyboard flourishes and the band groove like your favourite Marvin Gaye record.
The show is theatre – but, strangely, perhaps this was the wrong setting for it. Whatever, Dexys were fabulous and Rowland’s rehabilitation as an artist continues. And long may it continue – a comeback all about a new record and new performances? He’s got the guts to match those unique lungs.
Ian Prowse and Amsterdam had opened for Dexys and gave the headliners a run for their money. Popular local Prowse led a nine-piece soul review through a set that rocked, rolled and brought tears to many eyes, when his anthem ‘Does This Train Stop On Merseyside?’ was dedicated to the 96 and sung “for the city’s ongoing boycott of The Sun newspaper.” A class act from start to finish.
It was a nice to head back down the hill after Dexys and join in the madness around Seel Street. The city really was alive and town was buzzing. As were my ears, following an aural assault from Blizzard at the Brooklyn Mixer: raps, spoken word and beat boxing were nothing if not a million miles from Dexys! 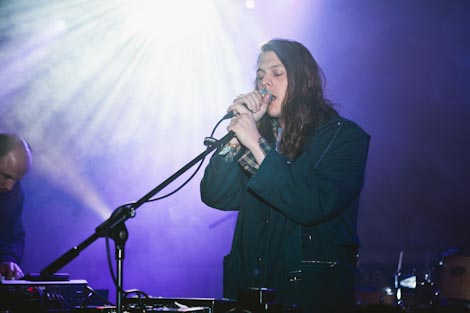 Warp’s Darkstar – one of the many electronic acts excelling at Liverpool Sound City 2013
With our senses in a state of flux and not knowing what was coming next, we’re all of a sudden surrounded by the delights of the Kazimier Garden. The place looks ace and Luxembourg’s Sun Glitters are coming on like Boards of Canada – all widescreen vocals, ethereal pitch shifting and wonky melodies. It’s not our bag and after the honest to goodness soul of Kevin Rowland and Dexys, we’re craving a song with feel.
It doesn’t arrive back at the Brooklyn Mixer for Ghostchant. But the ambient dubstep soothes our mind (really!) and sounds big. It’s an all new set from tipped music maker, Joe Cornwell, and the punters love it. If you’re a fan and missed this, there is a bit of future garage in your, well, future.
Our minds wander from the music and, looking for a connection to see what’s happening everywhere else (as beefy as the music is, it ain’t a performance you can keep your eyes on), we notice its 2am. The witching hour is upon us and thoughts return to Dexys at the cathedral, the heaving throngs walking around town with laminates bouncing and the constant noise, updates and twitter chatter that is Sound City.
Too much of a good thing? Time will tell. But, for now, let’s just celebrate the most diverse three days of music this city has ever hosted. See you next year – and don’t forget your charger.
Pictures by Getintothis’ Conor McDonnell and Sakura.