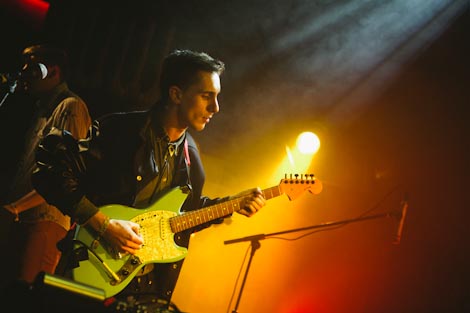 Liverpool Sound City climaxes with a Screenadelica frenzy, a rising Liverpool soul star and the fruits of a much anticipated debut from Outfit, Getintothis’ Sean Bradbury signs off quite literally out of breath.

It is always over too soon and here is that feeling again. The long goodbye on the final day of Sound City begins with Bantam Lions in the Garage.
Thankfully, despite the look of his gear on stage, this was much more than just a man and his CPU. Mike Carney‘s looped laptop beats and live synths create warm, luscious layers and occasionally, when all the elements of the mix and stars align, insistent sounds that demand foot movement and head nodding. 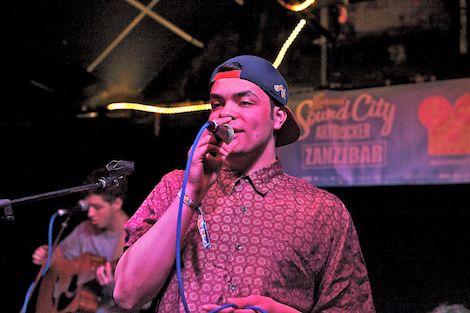 Ady Suleiman – Liverpool’s brightest fine young talent
Next it was off to the Zanzibar for a rising LIPA soul star. The place was packed out for Ady Suleiman, with word of his talent clearly already spreading beyond this city.
His effortless breathy exhalations come with a powerful purity, no frills or trills, just every note hitting the spot.
Ably supported by the guitar and backing vocals of former Ninetails frontman Ed Black, Suleiman’s sound – his voice having drawn comparison to Amy Winehouse which is fairly clear here – is primed to extend its reach far and wide. We leave positively brimming to see him in such a context…
Three drummers and a gimp playing a cowbell walk into a bar.
It might seem like a strange spin on an old joke set-up, but this is very loud and very real in Screenadelica as Jazzhands do their unique five-a-side, fetish Slipknot thing. 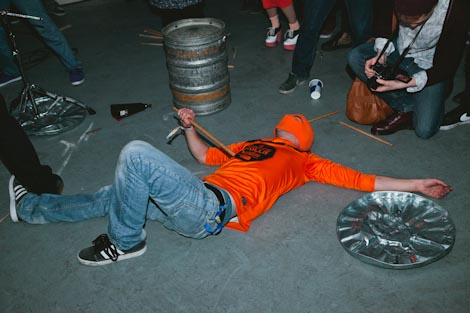 Jazzhands – flat out at Sound City 2013
Nothing is conventional with this lot. The band leader and bassist plays mostly with his back to the audience, and did his final soundcheck by reeling off an extensive list of Pokemon characters.
But everything is brilliant. Getintothis only caught just a few of their raucous burps of deathjazz noise and it wasn’t enough. It is very rare you see a very good group and can say with absolute certainty that no-one else is doing what they are. Anywhere. Ever.
A quick dart back to The Garage to catch the last couple of numbers from Baltic Fleet proved well worth the effort.
Paul Fleming‘s industrial soundscapes become more organic with live instrumentation, as melody lines turn into infectious hooks and delectable grooves lock in, his driving krautrock tracks morphing into extended dance-rock jams.
That he can sign off with The Wilds and seamlessly weave in a bit of Daft Punk‘s Da Funk illustrates the point. 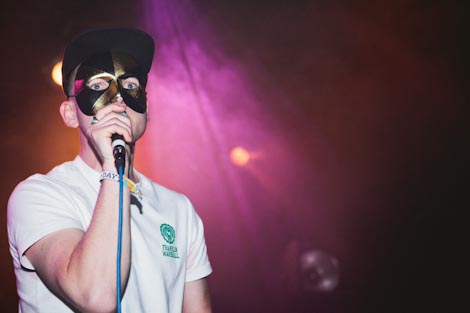 Brolin – delicate and delightful
Next was a date with engaging bedroom producer and R&B harlequin Brolin in the Kazimier.
The masked frontman captivated with heartfelt vocals over simple, blissful electronic melodies and live drums. Even his synths sang with soul, with NYC and Reykjavik memorable highlights from his half hour.
Following on were Amateur Best, who were gone almost before they got going.
Just a handful of tracks was all their slot could take, not really time to get a measure of their capabilities. Bowiesque croons over some neat synthwork and atmospheric guitar suggested promise. 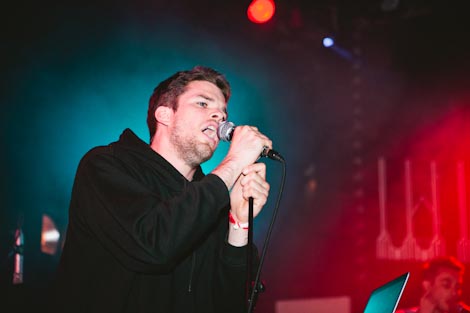 Amateur Best – brief but budding promise
It was left to Outfit to close our Sound City on a high and they didn’t disappoint.
They’re now showing their full hand, giving a run out to what is surely nearly all of forthcoming record Performance in an album-length set.
The title track moodily kicks things off before two nuggets of sinister, shadowy synthpop recalling a darker Hot Chip arrive in the form of House On Fire and Nothing Big.
They lurch and sway with the woozy Drakes, speed up with Vehicles and I Want What’s Best before the big finish on Two Islands – still their magisterial magnum opus and the beating heart of what will surely be a triumphant debut release. 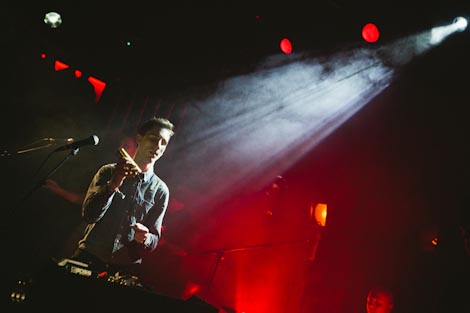