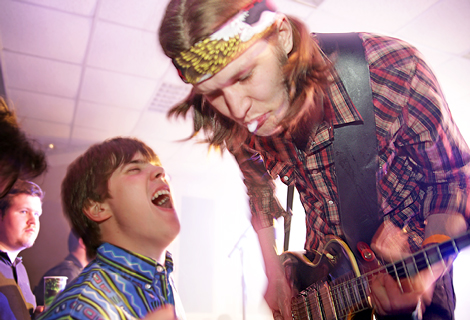 It is scientifically proven that there is no greater way to kick off the final day of Sound City than with free beer, free food and free goodies – welcome to the Korea Rocks showcase at the Kazimier Garden.
With a hearty breakfast of noodles and Corona under our belt it was time to tuck into Galaxy Express, a proper rock off, head-banging three piece who dazzled the sun soaked crowd with their boundless energy and sheer coolness – oh, and the guy played the guitar with his teeth. Bonus.
The Kaz Garden crowd were soon in for an even greater treat when Goonam took up centre stage. Looking like a throwback to Woodstock, sounding undeniably adorable with their broken English, these guys oozed a zest of life itself. The bassist and guitarist, both sporting lucky-bag gold medals, first met at karaoke, a match made in cheesy sing-along heaven.
With relentless grooves, they appealed to the crowd: “Let’s make dance time” and then leading by example, the bassist invaded the audience, ending up on someone’s shoulders. And a Sound City highlight was born.
Over at the Bedford Stage, a sun soaked Mello Mello had enjoyed Irish songstress Allie Bradley‘s folky offering, her songwriting not unlike Adele; her voice sweet but soulful with no doubt of its Derry origins.
Followed by Common Tongues, a handsome bunch of gents with heartfelt melodies and a rich acoustic sound with guitar and fiddle, there was something recollective of a Richmond Sausages advert. Just our cup of tea. 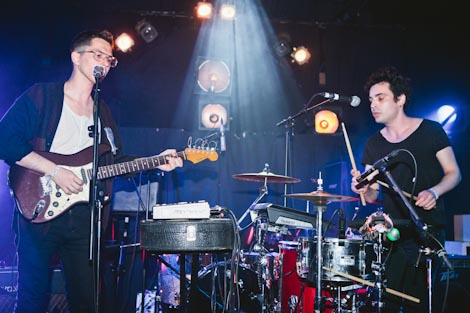 Mind Enterprises – stylistic cool and immediately impressive
Ilona, however, was not. Backed by a guitarist in a top hat and a cajon player, they were the very definition of a talent show act. With a weak voice and even weaker song writing (apparently ‘love is like a loaded gun‘), her last song, 1966, contained lyrics made up entirely from singles released in the given year – an intriguing concept, but like Communism, looks better on paper.
After an early evening interval it was off to the East Village Arts Club for the illustrious Willy Moon whose ipod advert success and immaculately coiffed hair had created a proceeding reputation among Sound City goers.
The loft was packed out but not for long it seemed. Willy bounding on stage in pure old school rock and roll style making big noise and gyrating to within an inch of his life.
It soon became clear as Moon held the mic in his mouth and threw faces that should be reserved for only the most intimate of moments, that this guy loved himself so much an audience wasn’t entirely necessary, and they began to slip away immediately. 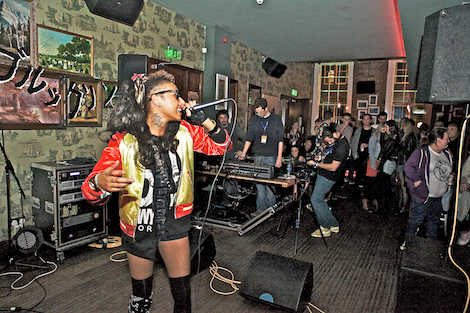 Miss Stylie – heavy salad, ‘cept the Wonderwall rotten tomatoes
A few boo-ers were challenged by two very tall Scots behind me, but even they had to admit quietly after a few songs ‘right enough, he’s a bit shit‘. He played the one hit wonder Yeah Yeah and a mass exit followed.
It was time for the Kazimier‘s first offering of the night, and settling ourselves down in a comfortable sofa on the balcony, we readied ourselves for Mind Enterprises.
The electro-pop duo, led by producer Andrea Tirone, were very of their time, with an interesting style, so cool, and thoroughly enjoyable.
Miss Stylie had obviously been enjoying the sun that afternoon as well, but had forgotten to take off her sunnies when she took to the darkened Brooklyn Mixer stage.
Small of frame but big of swag, Jade Jackson held her own on stage, rattling off a tireless tirade of her ‘heavy salad’ sounds. It was a shame then that 95% of the crowd hadn’t even realised she was there, though it was impressive how little that did to dispirit her.
However, by the time she began jamming with the DJ and an ill-advised attempt to rap Oasis‘ Wonderwall the salad soon became very soggy.
From Oasis to David Bowie; Night Engines at the Shipping Forecast had their musical heads screwed on right. Despite looking like an Irish labourer from the 1920s in his shirt and braces, red-headed lead singer Phil, sounds uncannily like the Thin White Duke circa Let’s Dance era.
And it turned everything the four piece did to gold, with exciting riffs and bass lines cut from the Franz Ferdinand cloth, the overall sound was pure 80’s tastic gold, one that would be welcomed with open arms to the dancefloors of Le Bat. 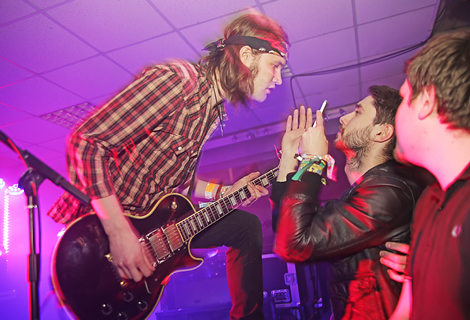 Wet Nuns – appropriate late night action
But Wet Nuns were calling! Attracting an audience almost as loud as they were, Screenadelica was awash with head-banging and face gnarling, everyone was giving it bells.
However, as the festival drew to a close, even my ears were tired, and Getintothis was one inappropriate proposition away from calling it a night, when a very tall, very drunken Dane asked if I was “looking for something special tonight?”
That was the sign. It was time to put Sound City 2013, and our own tired head, to bed.
Until next year, my dear. 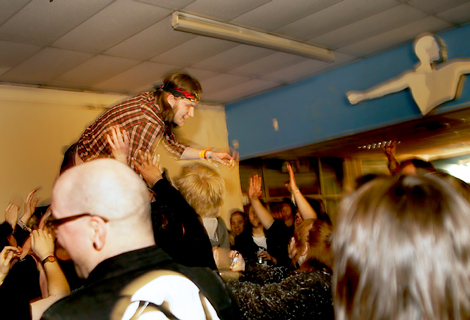