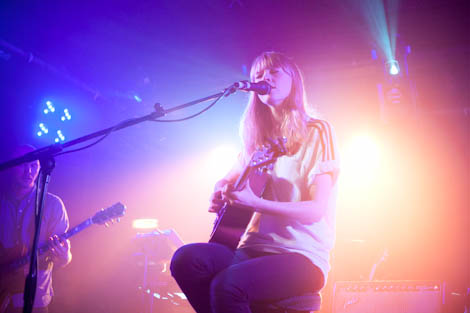 “I love you – will you marry me!?!”
Lucy Rose hasn’t played a note and she has already been asked for her hand in marriage.
For someone new to Rose she opens the gig in the best possible way. She stuns the room silent with minimal finger picking and that amazing voice. Her band walk on stage and over more marriage proposals ease into the second song.
The Academy is about as busy as you’ll see for a Sunday night.
People are standing on chairs at the back to get a better look at the 23-year-old, Surrey singer-songwriter, who before the release of her debut album Like I Used To last September, was primarily known for touring with Bombay Bicycle Club and lending her vocals to albums Flaws and A Different Kind Of Fix.
Lucy is shy in between songs but gets into a conversation with a fan who brought some milk to her last show in Liverpool. While there’s no explanation behind the brief interlude, it’s these asides – like the fact that Bjorn Agren (the bald dude formerly of Razorlight) is now plying his trade by adding nice guitar melodies to Lucy’s left – that provide a more interesting subtext to what’s actually being played out through the music on stage.
Thirty seconds in, Getintothis was all but briefly blown away.
After that, it’s all downhill, for while Roses’ vocals and distinctive guitar playing are impressive, it’s one dimensional and at its best sprightly lo-fi pop music. At worst it’s music to write a review to.
Picture by Getintothis’ Marie Hazelwood.