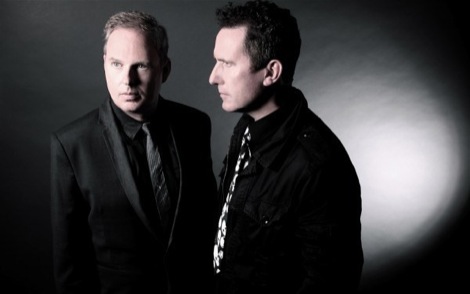 OMD are back with new album English Electric, a record which showcases their characteristic synth experimentalism married to immediate pop hooks. Ahead of their gig at Liverpool Empire, Andy McCluskey talks Kraftwerk, Danny Boyle’s Olympic Ceremony and Atomic Kitten. ‘I thought we’d all be going to work in flying cars and living till we were 200,’ he tells Getintothis’ Jamie Bowman.

For the sixties Merseybeaters it was probably Buddy Holly at the Liverpool Philharmonic Hall.
While for the punks it might have been The Clash at Eric’s.
Ask Orchestral Manoeuvres in the Dark‘s Andy McCluskey however, what gig provided his year zero and he’ll have little hesitation in telling you it was Kraftwerk at the Liverpool Empire in 1975.
There’s a nice synchronicity then that this week, Andy and fellow band mate Paul Humphrey‘s will step out on the Empire’s stage to run through a new album that if not a direct homage to the German synth legends, is a culmination of OMD‘s 30 year quest to make a very British brand of electro-pop.
“Kraftwerk were a huge influence on us in the early days,” admits Andy on the eve of their hometown show.
“We tried to pick up their ethos and develop it ourselves and amazingly their music is still considered to be challenging and innovative.
“I love the fact that a band who were trying to write about the future 35 years ago can still be perceived as being about the future now.”
Looking to the future is something that obviously preoccupies 53-year-old Andy. Following his group’s successful reformation with 2010’s History of Modern, OMD are bravely forging ahead with another album, the evocatively titled English Electric, which sees the duo shrug off any accusations of joining the ’80s nostalgia circuit.
“It was never intended to be that in the first place,” protests Andy.
“After doing a couple of tours it dawned on us that we didn’t want to be a tribute band to ourselves and so we took the dangerous decision to record a new album.
“It was well received and so far this album is getting even better reviews so it looks like it was the right choice.”
Despite OMD’s desire to keep things moving forward, there’s something undeniably retro-futurist about English Electric, with everything from the album’s name to tracks like Metroland and Helen of Troy recalling OMD’s early 80s heyday when hits like Joan of Arc and Enola Gay saw them gatecrash the charts.
“We are fortunate that we are a band with a sound but we don’t want to be pastiche,” he agrees.
“It was important to find some new sounds and a new way of doing things and I think we’ve got the right balance.”
Like their German heroes, OMD have always striven to fuse their upbeat pop with a streak of sadness and the nostalgic feel to the album fits in nicely with the current vogue for the hauntology influenced sounds of the Boards of Canada, Belbury Poly et al.
“We’ve always traded in melancholy,” laughs Andy.
“There is an overall feel to the album which I think touches on the progress of the interaction between technology and humans.
“I was a child of the 60s and I was living through that post-war Utopian dream of technology and thinking we’d all be going to work in flying cars and living till we were 200 years old.
“It hasn’t quite panned out that way so there is an element of that being unfulfilled.”
Marrying these influences and the duo’s desire to still hint at the experimentalism of 1983’s classic career threatening set Dazzle Ships clearly keeps things interesting for Paul and Andy.
“When we started out we were trying to be the future and trying to challenge ourselves but we always had a very melodic sensibility that gave us that pop crossover.
“You can still hear it on this album and although there are elements that are experimental they are not in an experimental form and are still easy to listen to.
“We right catchy melodies – we just can’t help it!”
Several of those catchy melodies will be on show at the Empire this week with Andy thankfully free of any guilt about simply playing the hits.
“We have new songs but we will always play the old hit singles because we have an obligation to play what people expect.
“It is not a pain – theses songs have been very good to us and we cherish them. I have fond memories of them just like the audience do so we respect that and play them how they were written.”
Probably the best known of these is Enola Gay, the 1980 top ten hit which was once described by the Guardian as ‘the perkiest song about a nuclear holocaust ever written’. A bona fide pop classic it was used heavily during Danny Boyle‘s momentous Olympic Opening ceremony.
“That was wonderful,” Andy remembers. “The whole concept of what Danny Boyle was doing was recognising Britain’s contribution to all sorts of innovations not least in music and to be included in that was a real honour.
“It’s remarkable really. Enola Gay is quite a strange song that was written 33 years ago about the dropping of the atom bomb and now it is part of the musical heritage of the country.”
Like OMD, another act on the reformation trail is Atomic Kitten, who Wirral-born Andy first conceived in 1998.
“I’m delighted for them because I have a huge soft spot for those girls,” remembers Andy, who wrote the likes of Right Now and Whole Again.
“I started working with them when they were all teenagers and Liz (McClarnon) and Natasha (Hamilton) left school to work on the band so I felt a real obligation to deliver something for them and I’m glad I did.
“It’s amazing they are all in their 30s now but I love them to bits and I hope they are having a blast, earning some money and keeping themselves out of trouble. It’s incredible to think it’s 14 years ago when I first worked with them – it’s amazing how time marches on.”