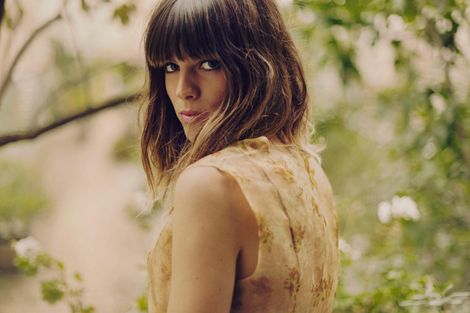 This week’s Singles Club finds Getintothis’ Stephanie Heneghan obsessing over a Parisian babe she missed at Sound City, bigging up her pub quiz credentials and gets to the bottom of why J Lo is officially rubbish. Did you spot the bum pun? Yep.

Melody’s Echo Chamber: Some Time Alone, Alone
One of the more annoying occurrences during Sound City this year was that at any given time there was at least two other acts you wanted to see and though I’m a clever girl (I am, ask my mum), I’ve not yet mastered the art of splitting myself into three. It is on my to-do list though.
Melody’s Echo Chamber was one of those problematic clashes and unsurprisingly all I heard was how amazing she was. She’s got that cool laidback vibe all sewn up and she looks like a fitter Alexa Chung, not that aesthetics have anything to do with it – apart from they do and she does.
This is dreamy indie pop that learns from the sound of the 60’s but without negating it’s more clichéd teachings – lush layered sound that’s fresh rather than hackneyed and that electronic church bell style chime that peels throughout just makes me feel happy.
I’m so pissed off I didn’t see her live so I’m going to give her my single of the week as recompense.

Getintothis on Melody’s Echo Chamber at Sound City.
The National: Sea of Love
I really like The National, they’re one of those ‘just on the right side of suicidal’ type bands that I will happily – well not happily, rather miserably usually – sit and listen to for hours without skipping any of the tracks which is a redundant task given they all generally sound the same. That’s not a bad quality, there’s a lot to be said for the dark brooding melancholy of The National.
Everyone has been dead excited for this track, which sounds remarkably similar to the rest of their output but in a good way. There’s been a lot of hype about the video in particular but I’ve watched it a few times now and I fail to understand why.
Is it the kid, is that it? I don’t really like kids. I like the song though, familiar as it is.

Jennifer Lopez feat Pitbull: Live It Up
I’ve a lot of love for J Lo, early noughties Lopez was involved in some amazing pop music, she churned out some half decent albums which I still listen to now – not even ashamed of that – and she did it all whilst being the fittest bird in the world. She rocked hoop earrings and velour tracksuits and looked like a goddess, how is that even possible?
The downhill tipping point in her career though, wasn’t when she hooked up with Puffy, or married her backing dancer, or made Ben Affleck rub her million dollar booty on a yacht for a music video, or had kids with the Crypt Keeper… no the most destructive moment in Jenny Lo’s history was being introduced to Pitbull.
Pitbull ruined everything. He turned her from sexy latina superstar into cheesy EDM knobbo. The only acceptable way to watch a J Lo video now is with the sound firmly off, although I bet for a lot of lads that’s always been the case, eh?

The Dirty Rivers: The Kid
I’ve got previous with The Dirty Rivers, a couple of years ago I saw them at Sound City and I think I called them derivative (because they were) and all their mums had a go at me and told me not to give up the day job which is actually really sound advice because this one doesn’t pay that well; ie: not at all. Thanks mums!
Anyway, here we are again, about to judge The Dirty Rivers. With two years passed I’m repeating my statement that they’re nothing new however this time they’re definitely more polished. It’s all very slick and well produced and sounds great – but innovative it’s not. It could be a Kasabian B side from five years ago, there’s a market for this kind of fodder among lads who have that slightly too long hair cut and the slightly too tight jeans and probably harbour dreams of being just like Serge.
If they all go out and buy this it’ll probably do really well but I won’t be buying it because… well I’ve got a free copy already. Got a free copy of Miles Kane too – two in fact. Living the dream guys! Using them as ironic coasters.

Bonobo: First Fires
Even if you don’t know it, you will know a Bonobo track. He is the darling of the TV/Film soundtrack world, his sample heavy lush electronic sounds figure on an impressive amount of adverts and backing tracks. God, that sentence sounds like it could have been lifted directly from a Press Release – I’ve clearly read too many of them lately.
First Fires is gorgeous, glitchy twitchy gloriousness. It’s so laid back it’s pleasantly stoned, eyes lightly closed and mellowed right out. Soaring strings throughout, soothing vocal, if we ever get any more sunshine this year I urge you to put this on your ipod, lie in the grass and stare at the clouds for a bit. Natures own music video that.

Dizzee Rascal feat Robbie Williams: Going Crazy
Every time Mr Rascal *Jeremy Paxman face* releases a new track, everyone pines for the good old Mercury nominated credible days and I think we all need to accept that we’re never going to get Boy In Da Corner Dizzee back. That was 10 years ago bruv (YEAH, BRUV), get over it.
These days he’s churning out duets with Robbie Williams (formally the fat dancer in Take That, you might have heard of him) which could either be absolutely terrible or utterly brilliant.
As it happens it was secret option C, bang in the middle. It’s listenable and cheerful, with a decent hook and combines the two best grins in pop music together. It’s fluff but it is enjoyable fluff and who doesn’t enjoy enjoyable fluff?

Tunng: The Village
You know how often a song will remind of a certain time in your life, instantly transporting you there (in your imagination like, not in a Doctor Who way) and forever be associated with that moment?
Well unfortunately for Tunng when I was listening to this I’d just been thrown out of my Gmail account and was frustratedly trying to remember what totally secure and completely forgettable code I’d been forced to set this time.
Is there really a need to have the password equivalent of Fort Knox for an email address that predominantly deals in ASOS newsletters and idle gossip? No, Google, there is not.
All of that is a shame for Tunng really because this is a nice little chilled out track with a bit of a cosmic electro feel to it, I really like the whirry noises (technical term) at the end which sounds a bit like the Tardis actually.
I’m reliably informed they’re playing the East Village Arts Club in October this year which is quite a way off but enough notice for you to sort your life out and get a ticket etc.
I probably won’t go due to the possibility of flash backs but you should, if you want. I’m not really arsed to be honest.

Petite Noir: Noirse
First things first, I do hope you’ve all noticed that there’s a glaring grammatical error in this artist’s name? Just because you’re all ooh la la French, Petite Noir, doesn’t mean I’ll allow sloppy standards. Secondly, he’s not actually French, he’s from Cape Town which is a bit of a drive from France.
Now we’ve cleared that up, this is proper boss. A bit of a SBTRKT flavour to it, he’s got a mad rich baritone vocal and whilst the lyrics are lacking in substance – “let’s ‘ave a party guuuuuurrrrl” is the mating call of scallies loitering outside Swiftdrinks at 3am on a Saturday morning (I’m not falling for that again) – it won’t stop you shrugging your shoulders in time to the drumbeat.

Camera Obscura: Fifth in Live To The Throne
This is not an ode to Princess Beatrice, who is actually the fifth in line to the throne, after Charles, William, Harry and Andrew. FYI, I didn’t even need to Google that which is why I am ACE at pub quizzes; seriously you want to see me own the living daylights out of a Boy Band round.
But yeah, it’s nothing to do with becoming Queen, it’s all about clinging on to a perfect relationship which actually isn’t that great just because you get treated like a princess or something like that. I dunno, I didn’t write it.
It’s alright, it’s a bit slow. I can’t even really describe it as ethereal because it’s more maudlin. I felt drained after listening to it a few times and pretty thankful that I’m single really. If relationships make you record music like this then let’s all just shag about and bin off monogamy… and the monarchy for good measure.

Editors: A Ton of Love
I’ve just chucked this one in here because since I heard it I’ve not been able to stop playing it. The Editors have chucked out their Interpol-lite persona of the previous three albums (and lets face it, the last one was pretty rubbish really), and adopted an Echo and the Bunnymen meets U2 at the beginning of the 90’s approach.
And I love it. Like, on repeat, drumming the living daylights out of my steering wheel, not even arsed that the fella in the next car is looking at me belting out the words, type of love it.
It’s nothing even that remarkable, it’s just dead dead catchy. Tom Smith‘s vocals sound huge, like some kind of angel faced rock god.