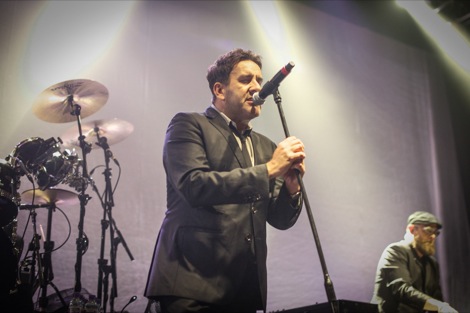 Amid the oppressive whirl of contemporary capitalism, there is no such thing as a job for life.
Except perhaps in the music industry, where a certain level of success allows the howl of youthful rebellion to morph into a bus pass to eternal income generation, Glastonbury headline slots and Rick Rubin-produced comeback LPs.
The Specials have been plugged into the reunion circuit for a good few years. OK, Jerry Dammers and Neville Staple may be absent from the present line-up – the former replaced by a keyboardist, Nik Torp, sporting a beard worthy of ZZ Top.
Yet Terry Hall (scowl intact), Lynval Golding, Horace Panter, Roddy Radiation and John Bradbury remain.
Sensibly eschewing new material, the band draw on a recorded legacy that was both revolutionary and relatively skimpy. On their two albums and two standalone, chart-topping 45s, The Specials smashed the narrow confines of ska-punk and entered the realms of sheer pop perfection.
They oozed politics and humour; melded searing critiques of Thatcherite post-industrial dystopia with the headrush of adolescent emotion; and issued a vital call to racial unity.
The Olympia in Kensington, an impressive theatre now more routinely staging the commodified brutality of MMA, is an ideal venue for a night of Rude Boy revivalism. The Specials had, after all, opened their second album with the pure music hall blast of Enjoy Yourself, appearing here as one of the night’s closers.
And by way of trivia, the Olympia was formerly known as the Liverpool Locarno – Hall singing “I’m going watch my money go/ At the Locarno, no” on the mournful Friday Night, Saturday Morning – albeit referring to the Locarno in The Specials‘ native Coventry.
Opener Concrete Jungle is all adrenalin-wired aggro-skank, setting the tone for a night of largely faithful renditions. Halls’ vocals remain yappy on Do the Dog, references to “the IRA, to the UDA, soldier from the UK” spat out with a vigour belying the shift in political timeframe.
Blank Expression boasts stop-start rhythms and paranoid lyrical ruminations, featuring a couplet so ace (“I walk in a bar and immediately, I sense danger/ You look at me girl, as if I was some kind of a, a total stranger“) it was quoted wholesale by Massive Attack. 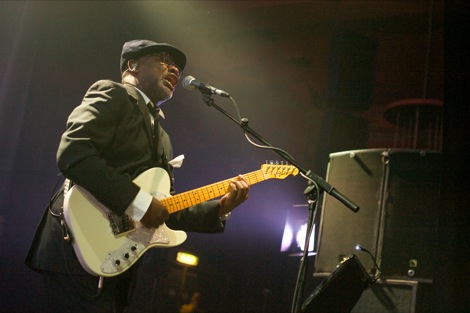 Lynval Golding in full effect for The Specials at the Olympia in Liverpool
The set wears on with a wave of mid-pacers from More Specials – Stereotype, Do Nothing, International Jet Set – that sees the band augmented by a string section.
The hint of cabaret is in keeping with the feel of their relatively overlooked second album; More Specials boasted Phoenix Nights-keyboards aplenty (Pearl’s Café) alongside dubby forebodings of nuclear holocaust (Man at C&A).
A horn section injects A Message to You Rudy with requisite swagger – although there’s none of the full-on brass assault of Guns of Navarone.
That is one of the night’s few notable omissions (perhaps pointless in the absence of Staples’ toasting), along with (Dawning of a) New Era.
The pace picks up again towards the end, with a frenetic Night Klub (it could have been dedicated to the memory of the nearby Grafton), Little Bitch and Too Much Too Young.
Ghost Town is suitably eerie; the night closes – as did the Elvis Costello-produced debut LP – with the melancholic You’re Wondering Now.
This was a night of pure nostalgia, with This is England clobber in abundance among an audience that included Abi Harding from The Zutons and Ian Broudie. But it was also a far-removed reminder of the power of music as a movement.
Pictures by Getintothis’ John Johnson.