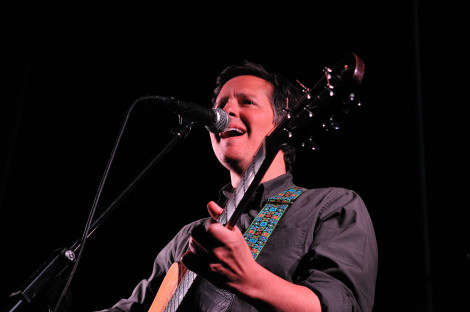 Josh Rouse returns to Liverpool with his sprightly Americana songbook, but it’s his star support which provides Getintothis’ Emma Walsh with the good vibrations.

It must be tough being a support act, providing the background music while the audience settle into an evening; being talked over and endured while everyone patiently awaits the main attraction.
But it must be even tougher to follow a support act like Sean Rowe.
Last Thursday saw Josh Rouse’s second visit to Liverpool. A dedicated following had gathered upstairs in Leaf in anticipation, but his spotlight was stolen by his touring buddy Rowe.
Hailing from New York, Rowe has a bass voice that crawls right under your skin and hovers around under your ribcage.
There is bluesy grit to his voice that draws comparisons with Tom Waits or Leonard Cohen; a notion confirmed by a beautifully sincere cover of Chelsea Hotel No. 2.
There are some songs that are sacred, and should not be touched by even the most well respected artists, but Rowe could probably adopt any of these without upsetting the die hards.
Not that he has to rely on covers with a wealth of songs rich in acoustic charm and bluesy undertones.
His songwriting has effortless eloquence straight from the Bob Dylan school of storytelling, alternatively creating intense pin-drop moments and huge swells of sound, giving the microphone hell with real passion.
To Leave Something Behind, Signs, written for his father, and Wrong Side of the Bed all have the audience completely absorbed. Mumblers at the back are hushed into submission.
It’s not very often that you don’t want the support to finish, but you could listen to Sean Rowe all night. Hopefully on his next visit, it will be as a headliner. 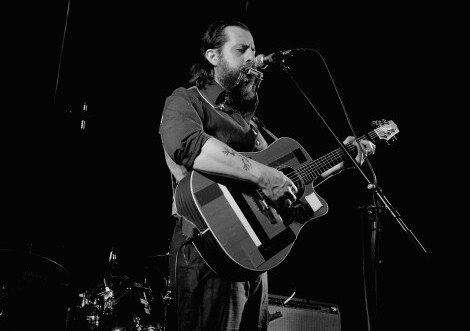 Sean Rowe grabbed the spotlight at Leaf, in Liverpool
Even with a crowd of adoring fans, Josh Rouse faced a tough challenge following Rowe, and his style couldn’t be more different, bringing the audience out of the shadows of the Rowe’s gritty New York sounds to sunnier climes.
Pure, unadulterated, head-nodding American folk-pop, every song has a feel-good element, bordering just on the right side of a sickly-sweet Sesame Street tune.
But there was something undeniably samey about the whole affair. Rouse has established himself as a worthy artist and songwriter but on this occasion there was just something missing. There was no blood, sweat or tears dripping from his songwriting or his execution of it.
His performance was like a pinch of the skin after Rowe’s kick in the balls, and everyone felt it.
But Rouse did well to bring the audience back onside, a few happy-clappy bass lines a la Simon and Garfunkel and a few melodies not unlike those nostalgic seaside fairground tunes reminded us of what he does best.
Then the singalongs began for the old-favourites, Sleep with the TV On, Don’t Let Go Of My Love and Love Vibrations dragged the audience out of whatever coma they had slipped into. 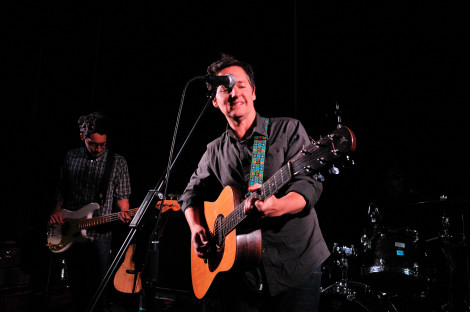 Josh Rouse live at Leaf, Bold Street
The mandatory walk off, walk on stage scenario brought perhaps the most impressive performance by Rouse of the evening, in a solo effort he gave a beautiful rendition of Sad Eyes, but whatever magic he had mustered up was lost again when the band rejoined him.
Despite finishing with a crowd pleaser, there was something wanting from Rouse’s set. We’re still waiting for the punchline.