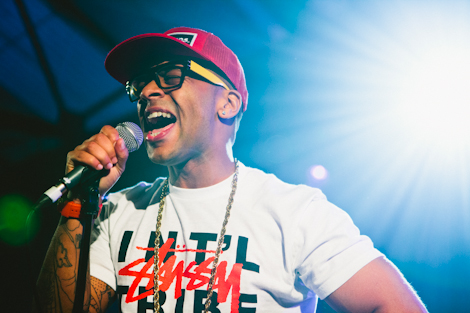 Esco Williams joins Dutch Uncles, Kindness and Floating Points as one of the artists to receive backing from Arts Council.

Esco Williams is among the 10 artists to benefit from the Momentum Music Fund.
The PRS For Music Foundation announced the new Arts Council-funded initiative, which provides grants to bands looking for help getting to the next level, earlier this year.
GIT Award nominee Esco Williams joins Brolin, Dutch Uncles, Floating Points, Hacktivist, Hannah Peel, Kindness, Teleman, Thumpers and The Wytches.
It’s the first artist-centric programme for contemporary music pursued by the Arts Council in England.
They were selected by an industry panel from around 500 submitted applications. There are eight more Momentum funding rounds between now and October 2014 with the judging panel to vary each time.
The fund can grant up to £15,000 to any one artist, and that can be used to fund a range of activities, including recordings, releases, marketing campaigns and touring. The PRS For Music Foundation says the aim of the fund is to “support exceptional artists, to help them realise their potential and contribute to the musical success story of this country”.
Commenting on the first round of applications for the new fund, PRS Foundation boss Vanessa Reed told CMU: “The overall quality of the Momentum applications to our first deadline has reinforced my belief in the importance of this fund and the impact it’s going to have on its first line-up of talented beneficiaries.
“Our message to those who were not successful this time is not to give up. There are more funding deadlines to come and we’re actively seeking additional sponsors to increase the support we can offer.”
The first such additional sponsor is streaming music service Deezer, which will make a contribution to the Momentum Music Fund and provide support to artists who receive grants. Deezer has also put together a playlist featuring eight of the bands who secured funding on this first round.
Commenting on all this, Arts Council England boss Alan Davey said: “This is a brilliant milestone for Momentum and, after many months of hard work behind the scenes both at the Arts Council and PRS For Music Foundation, it’s marvellous to see artists starting to benefit from this fund.
“Momentum is all about helping real talent to find its place and I look forward to seeing all ten artists – and those who follow them – grow and flourish with its help.”
Further reading on Getintothis:
Getintothis reviews Esco Williams at Astral Coast.
GIT Award 2013 and Esco Williams single launch: The Grey Space, Water Street
Watch Esco Williams’ video to the New Challenger.
Getintothis‘ in depth interview with GIT Award nominee Esco Williams.