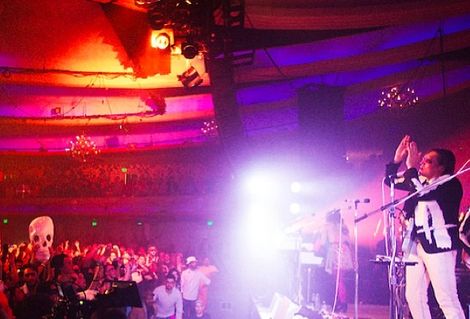 A lot’s been made about the ‘mandatory’ formal/fancy dress rule for the recent The Reflektors shows, so it’s pleasing to see as Getintothis arrives at the Winter Gardens, literally everyone has made some sort of effort.
From formal wear to full-on fancy dress, everyone seems fully on board, in high spirits and there’s just that sense that tonight we’re in for something quite special.
From the distance, something is coming this way, and that something is making one hell of a commotion. Eventually Arcade Fire, sorry, we mean The Reflektors appear, complete with huge papier-mache heads, and in tow a Mariachi band playing the title track from their fourth studio album. The result: a mass sing-along adjacent to the tram stop next to tonight’s venue.
The venue itself couldn’t be more suited to this album’s promotional tour, Blackpool’s Winter Gardens grandiose setting, providing the ideal backdrop for the disco-noir sound of Reflektor. Prior to the band taking to the stage – there’s no support tonight – the band mill about, greeting excited fans while happily posing for photographs, only adding to the special occasion.
As the curtain drops, a masked band take to the stage to Rebellion (Lies) intro, only for the real Arcade Fire to burst on and kick them off, with front man Win Butler, shruggingly saying, ‘Apologies for that…‘ No apology necessary.
Opening with the direct, drilled anthem Normal Person, the band segue seamlessly into the somewhat dub-reggae track Flashbulb Eyes before the pandemonium of the audience crush subsides and unfurls into a disco shuffle, but it’s not until Neighborhood #3 (Power Out) that the crowd truly comes alive as the floor literally feels likely to give way.
The evening’s set largely consists of music taken from the opinion-dividing Reflektor, and while there’s barely been time to draw considered conclusions from their latest record, the new tracks tonight are welcomed like old favourites, as the 10-strong outfit fizz through Joan of Arc, You Already Know and Afterlife, at the same frenzied pace as the show opened with.
Upon entering we were presented with glowsticks and instructed not to use until We Exist is played; with it’s sultry 80s sounding vibe, the ballroom is lit up with a sea of light, as people at the front are shown a choreographed dance move to perform to; it detracts from what’s unfolding on the stage, however, it’s fun, silly and it doesn’t half make for an awesome sight.
Sprawl II allows Régine Chassagne to take her place at
the front of the stage, before Wake Up creates near hysteria among those in attendance before one of Reflektor‘s highlights, Here Comes The Night Time brings proceedings to a close as confetti cannons shower us from above.
This of course fools no one, as everyone knows an encore is coming, but perhaps no one is expecting Win, Régine and Owen Pallett to appear to the side of the stage for a stripped down version of Neon Bible‘s My Body Is A Cage.
As the album’s title track appears, Win, again wearing a mask – only this time, mirrored and in keeping with the album’s theme, they close with the Funeral classic Haiti which has the dance-floor once again swaying and singing along.
But of course that’s not it, there’s a DJ set to follow too. It’s a totally unique and special occasion throughout, and everyone fortunate enough to be present knows tonight
they’ve been apart of it.