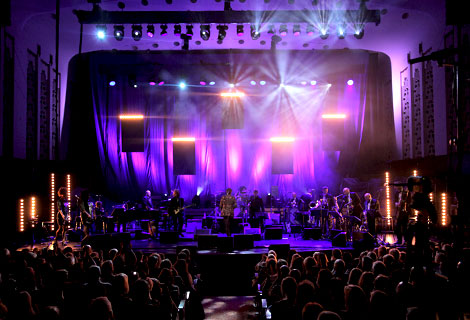 Bryan Ferry isn’t quite the oldest swinger in town yet as Getintothis’ Alan O’Hare finds the former Roxy Music man in fine fettle.

The smart dinner suits, the black ties and the crisp white shirts: everything you’d expect from a Bryan Ferry show. Except that it’s 8.15pm and the man himself still hasn’t appeared.
Instead, an ensemble of penguin-suited saxophonists, clarinet players and trumpeters of various ages are neatly assembled on stage – think a barbershop quartet meeting The Skinnerettes (remember them?). Hope Street has been turned into the Thames during regatta season.
This is ‘A Night with Bryan Ferry’, not a gig, and the orchestra bearing his name open proceedings with cabaret-esque Dixieland versions of Roxy Music hits – whetting the appetite of a packed Philharmonic audience in a way that a laminated menu shows hungry diners what they can look forward to. 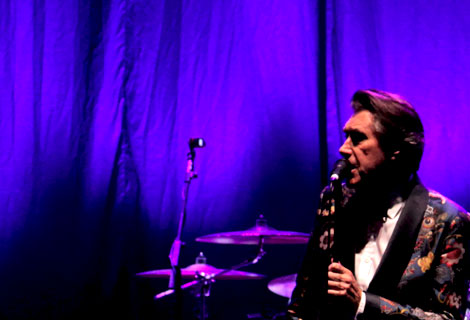 Bryan Ferry live at Liverpool Philharmonic Hall
Finally, Ferry appears on stage like a suburban fox leaping from the shadows, not even breaking stride as he marches up to the mic with the band playing on. This is who everyone is here to see and the singer is ready.
Dressed in a paisley smoking jacket and black bow-tie (which was hung loose around his neck after one song), Ferry takes us on a musical journey through 40 years of hits.
His presence on the stage, along with his own (heavier) backing band, adds the muscle and might that so far have been lacking, with wind and brass no match for a little musical youth on electric guitar and drums.
Oh Yeah and Smoke Gets in Your Eyes give those who have been following Ferry for much of his lengthy career what they have come to hear – but the inclusion of covers, such as the delightful Carrickfergus and Knockin’ On Heaven’s Door, show that tonight is as much of a who’s who of hits, rather than a straightforward ‘best of’ set. 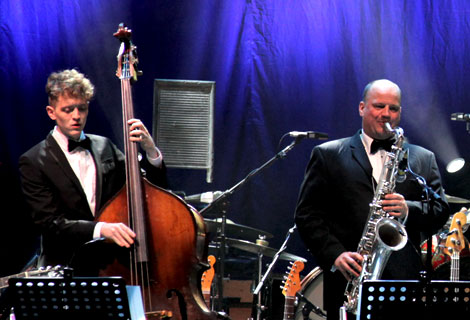