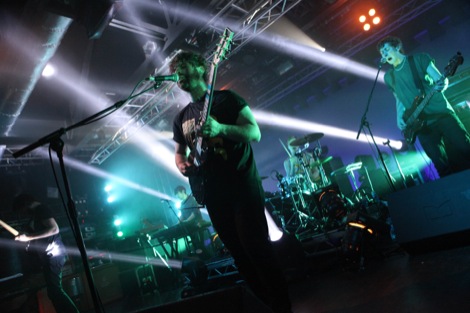 The scramble to plant a sizeable marker in the soil marked ‘2014’ has begun in earnest, with Foals selling out their Sunday February 2 show at East Village Arts Club in double-quick time.
The tour forms part of the inaugural Fly Awards, which will hold a ceremony at the Forum in Kentish Town, London on February 6 next year.
XFM are official media partner for the event, with War Child announced as official charity partner.
Foals‘ gig will almost be a year to the day since the group released their last LP, the righteous and titanic Holy Fire.
Led by the diminutive but no less acerbic Yannis Philippakis, Foals traverse the lines between world music, good old rock and roll and dance-led rhythms, all wrapped up in well-constrained boundaries.
Quite frankly, it’s going to be an absolute belter.
For further information click here.

Further reading on Getintothis:
Liverpool’s gig calendar 2013: Guide to essential gigs not to miss the rest of this year
Foals, The Invisible: O2 Academy, Liverpool
Foals: The Kazimier, Liverpool