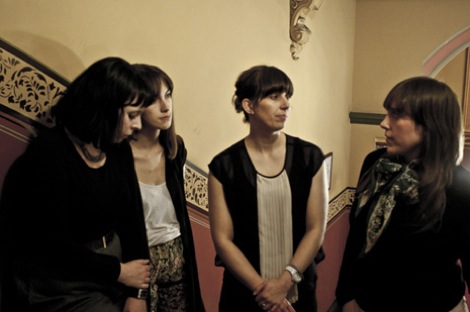 The latest chapter in the Singles Club world tour sees Getintothis’ Chris Burgess visiting our friends down under and then blasting off to meet Kubrick.

The Icypoles: Babies – Single of the Week
Melbourne-based quartet The Icypoles release this playful and dreamy track ahead of their debut album, My World Was Made For You.
Featuring members of the fabulous and very underrated Architecture In Helsinki, the four Melbourne girls have provided perhaps the oddest track of the week – beginning with an acapella nursery rhyme chant along, before layers of atmospheric synths and perfectly produced bass and guitar kick in and take over.

Watter: Rustic Fog
Another band containing members of underrated former bands, Watter are anchored by legendary drummer Britt Walford, from Slint, as well as multi-instrumentalists Zak Riles and Tyler Trotter.
Rustic Fog is a breathtaking soundscape – moody, monolithic and moving. As mood music goes, this is one of the best pieces I’ve heard in a long while, ebbing and flowing along psychedelically, almost Krautrock-like, but perhaps with more scale and ambition.

Smoke Fairies: Eclipse Them All
Eclipse Them All is a sophisticated, at times claustrophobic, at others soaring tune from Jessica Davies and Katherine Blamire. With a simple beat, plain synth organ and ostensibly laidback vocals, the song becomes ever more layered, climbing to a luscious chorus.
The space age video appears to pay homage to 2001: A Space Odyssey, too. Look out for them at the East Village Arts Club, on May 29.

Max Cooper: Empyrean
A former genetic researcher, with a PhD from University College, London, Cooper is one of the most interesting producers of electronica around at the moment. Empyrean is a beautifully made, glitchy yet melodic track, with twinkling piano and an intense beat.

Lyla Foy: Feather Tongue
Ahead of playing Liverpool Sound City in May, the London songwriter/producer releases her debut full-length album Mirrors the Sky this week on Sub Pop.
Feather Tongue is a chilled out track, with a cheeky synth line and resolute beat that bounces the song along underneath Foy’s tender and melodic vocal line.

Jon Porras: Apeiron
Best known as one half of polymorphic drone duo Barn Owl, Porras has created an atmospheric and cavernous electronic sound.
However, unless you’re a fan, or in the right frame of mind, this track will frustrate you.
While it stops short of insisting upon itself, it’s not too far off. That’s the intrinsic trouble with drone-based music, it alienates as many people as it attracts. At seven minutes long, Apeiron does sail quite close to the wind in that respect.

Pure X: Heaven
Spring seems to have arrived this week, and Heaven is ideally suited to the change of season – chilled out, laidback and with a few hints of summertime.
The Austin-based Americana band continue to reinvent themselves, switching genres again on their new album, their third, Angel. There’s a certain beauty and substance to Heaven, which is due in part to the album being recorded straight to tape – a rarity in this day and age.

Orian: Don’t
Liverpool-based Orian releases her debut single Don’t on April 1. It’s a slice of ice-cool pop with lashings of sophistication. Her Mike Britts-directed video, meanwhile, finds her sloshing about in the bath with her clothes and jewellery on, which lets face it, is slightly less sophisticated.
Find out more here.

White Lung: Drown With The Monster
As the only real rock tune this week, props have to go to Vancouver’s White Lung – recently signing to Domino – for sticking out from the crowd.
Drown With The Monster is a breakneck speed hardcore song, with vocalist Mish Way’s vocals conjuring the spirit of the 80s LA punk scene wonderfully.
The video is worth watching just for a few glimpses of their drummer, who looks like she should be hanging out at the library, not pounding her kit within an inch of its life. I think I love her.

Iggy Azalea ft. Charli XCX: Fancy
Sometimes music is dumb. Not quite Barraco Barner dumb, but dumb nonetheless.
Fancy is really good fun, but ultimately it’s a song with no real substance. Lyrics include the tremendously self-indulgent and entitled-brattish “let’s get drunk on the mini bar…feels so good getting what I want…classic, expensive, you don’t get to touch“.
This is a fantastic tune. Banks sounds dumb, her lyrics are dumb and the tune is dumb. It’s got number one hit written all over it!